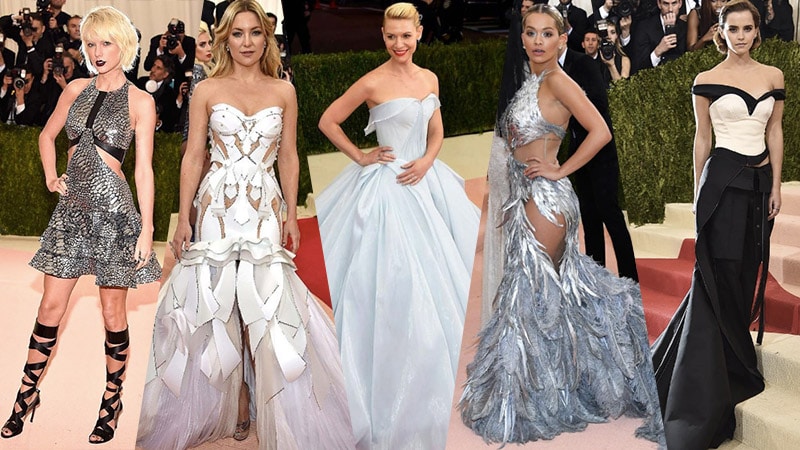 The first Monday in May has come around once again and brought with it fashion’s night of nights; the Met Gala. An event which André Leon Talley describes as the Super Bowl of fashion, the Met Gala sees global celebrities and industry members converge on the Metropolitan Museum of Art in New York for an unforgettable evening. The event is an annual fundraiser for the museum’s Costume Institute and sees an elite crowd celebrate the overlapping worlds of fashion and art. Dressed in the finest designer and couture labels, everyone who’s anyone in the world of fashion attends the Met Gala, and 2016 was no exception.

Each year the Met Gala embodies a theme which corresponds with the Costume Institute’s spring exhibition and for 2016 that was ‘Manus x Machina: Fashion in an Age of Technology’. The concept, which required somewhat more imagination than last year’s ‘China Through the Looking Glass’, brought forth a range of outfits adorned with hardware and metallic shine. Featuring silver and gold colour palettes and an abundance of beads, sequins, and metal, Manus x Machina was an expert lesson in dressing like a seductive robot. Form-fitting gowns contoured the body and created structural silhouettes which appeared strong and secure. A balance was struck between appearing as a bejewelled silver screen siren and something from a Terminator movie. Some celebrities managed to nail this difficult theme while others missed the mark altogether.

Year after year, the Met Gala brings out fashion’s A-list. From designers and models to actors and musicians, the best-dressed celebrities from around the world all attend this major event. This year’s event saw the regular crowd of famous guests with a few new faces in the mix. Unsurprisingly the Kardashian/Jenner clan ruled the red carpet with Kim, Kendall and Kylie all wearing knock-out looks. Woman of the moment, Beyonce, also attended and wore a Givenchy gown which almost resembled bejewelled skin! The nude latex number was an attempt on futuristic fashion which no one else thought to try. Anna Wintour brought daughter Bee Shaffer with her on the red carpet while sibling duos Mary-Kate and Ashley Olsen, and Willow and Jaden Smith showed off just how fashionable a family can be. Sisters Gigi and Bella Hadid also had cameras flashing as they walked the carpet with their musician boyfriends, Zayn Malik and Abęl Makkonen Tesfaye known for his stage name The Weeknd. Who else attended? Far too many to name but everyone from Madonna and Calvin Klein to Kate Hudson and several Victoria’s Secret Angels showed up for the glamorous night.

Taylor Swift chose an edgy look to match her new bleached-blonde hair and evolving style. The singer rocked a metallic silver, Louis Vuitton, snakeskin dress, and completed her look with burgundy lipstick and heels strapped up to the knee. The outfit, which nailed the theme, had some viewers questioning her choice but we loved it.

Emma Watson looked like the perfect modern woman in this Calvin Klein creation. Feminine yet strong, the unique design suits Emma’s personality to the tee.

While everyone was busy wearing Balmain, Kendall Jenner was killing it in Versace. This somewhat sporty, barely-there design turned all the right heads.

Karlie Kloss can pull off anything but we think she looks extra amazing in this architectural-looking Brandon Maxwell design.

Wow! Need we say any more about this incredible peacock, Dolce and Gabbana dress?

We are so in love with #ZoeSaldana's colorful peacock gown! The #GuardiansoftheGalaxy actress is certainly making a statement at the #MetGala #ManusxMachina | ?: Larry Busacca/Getty Images

Kim Kardashian and Kanye West wore paired Balmain outfits which were heavy on the silver and big on the bling. While Kim channelled a glamorous robot, Kanye mixed things up with relaxed, ripped denim and shocking blue contact lenses.

#KanyeWest and #KimKardashian, both in #Balmain, bring the bling (minus Kanye's ripped jeans) to the #MetGala! ? #ManusxMachina | ?: Dimitrios Kambouris/Getty Images

Jourdan Dunn shines in a waterfall of silver in this Balmain dress. Her Victoria’s Secret angel pals Doutzen Kroes and Alessandra Ambrosio don’t look too bad either!

These strategically placed silver feathers make for a stunning and magical look for Rita Ora.

Wow! #RitaOra's gown for the #MetGala has to be the most epic so far. (?: Getty Images)

A post shared by Entertainment Tonight (@entertainmenttonight) on May 2, 2016 at 4:27pm PDT

Karl Lagerfeld’s muse, Kristin Stewart looked radiant in Chanel. The all-black dress with added sparkle gave a nod to the theme without over-doing it while Kristin’s silver eye shadow pulled the look together flawlessly.