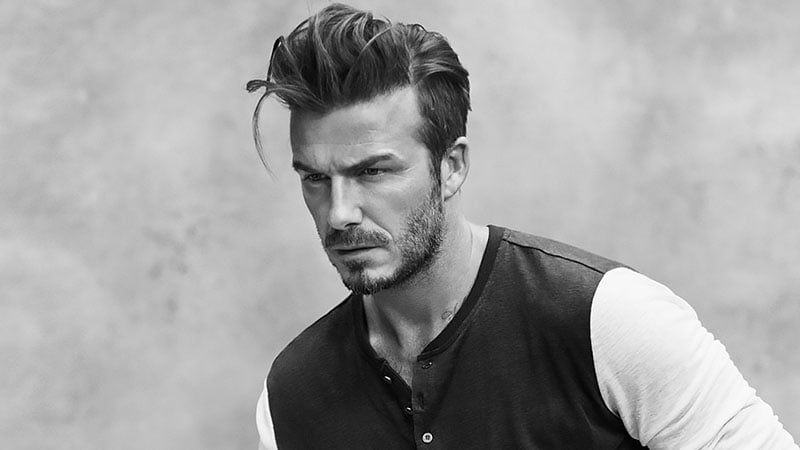 Okay, so you’re going bald. Admitting it is the first step in overcoming it. Now we can move on to coping with loss and finding the best way to look good as you do it. As your hairline retreats on your scalp, you have a choice. Either you can clutch desperately at your youth and pretend you still have a full head of hair, or you can deal with it gracefully. We have you covered in our guide to the best men’s hairstyles for a receding hairline that will keep you looking youthful forever.

RELATED:  How to Stop a Receding Hairline

The ultimate way to look a receding hairline in the eyes and say ‘no’ is the clean shave. It’s a look that doesn’t work for everybody, and unfortunately, you will probably only learn whether or not you can pull it off once you’ve already taken the leap. But as long as the shape of your head complements your face and you can wear the bald look with confidence, this is a look that you just might be able to own. The clean shave works best with a full beard to bring a sense of balance to your otherwise hairless head. 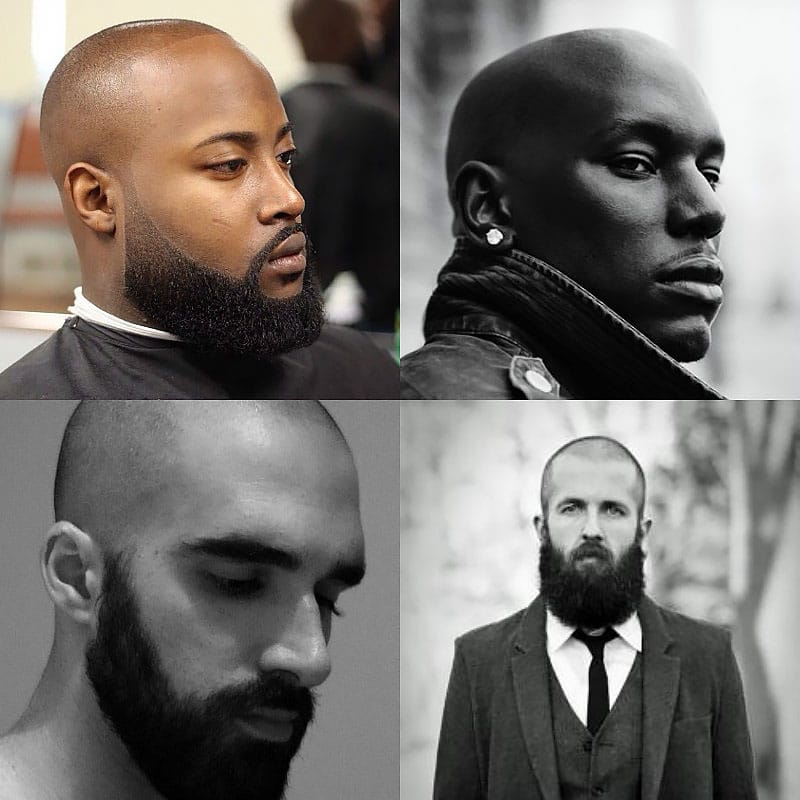 A slightly longer and less brutal option than the clean shave is the buzz cut. It’s the quintessential military-inspired haircut that is both sympathetic to thinning hair and easily taken care of. The buzz cut also offers the bonus of making your facial features look more defined. By drawing others’ eyes from the hairline down to your brow line, your face immediately appears more chiselled. Choose tapered sides for a more modern take on the traditional buzz cut. 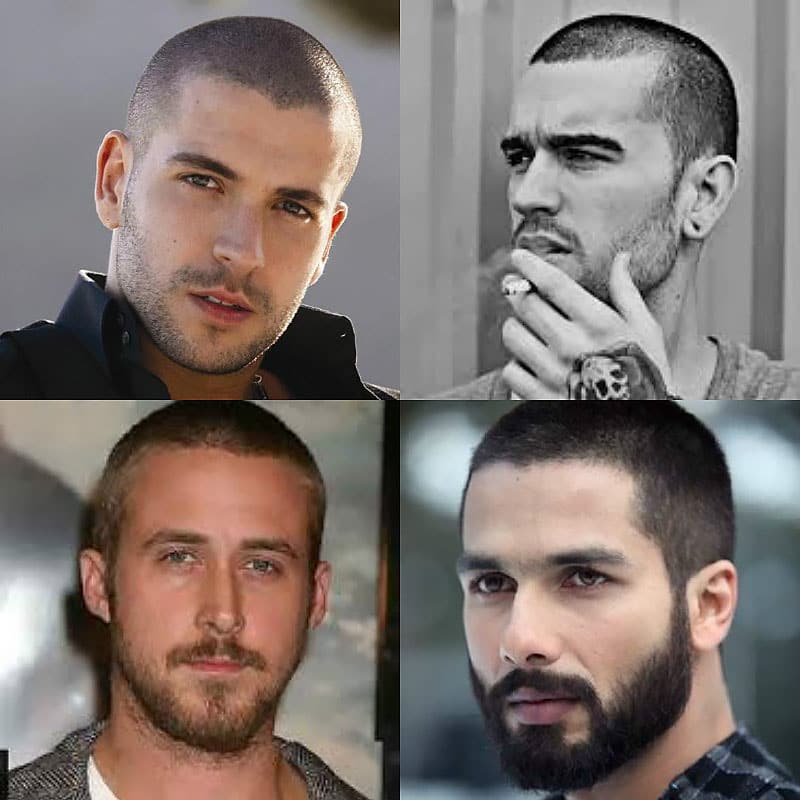 It is a style that ebbs and flows in popularity, but the faux hawk is a useful haircut for the receding gentleman. By drawing attention to the centre of the hairline (and away from the temples) the faux hawk uses a receding hairline to its advantage. Don’t let the name put you off, the faux hawk can still be a short, subtle cut. 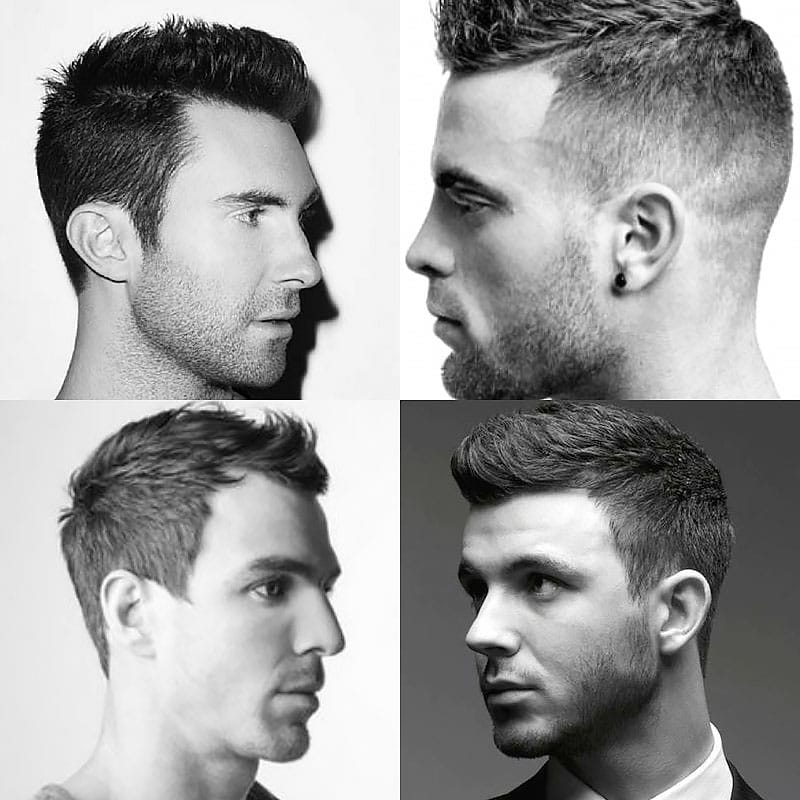 We’re not talking about a Prince Charles or, God forbid, Donald Trump haircut here. The comb over hairstyle is an incredibly popular style for men whether they’re balding or not. The comb over works well for balding brothers by using a receding hairline as the lowest point in your hair’s natural part line. This gives an artificial sense of weight to your hair. 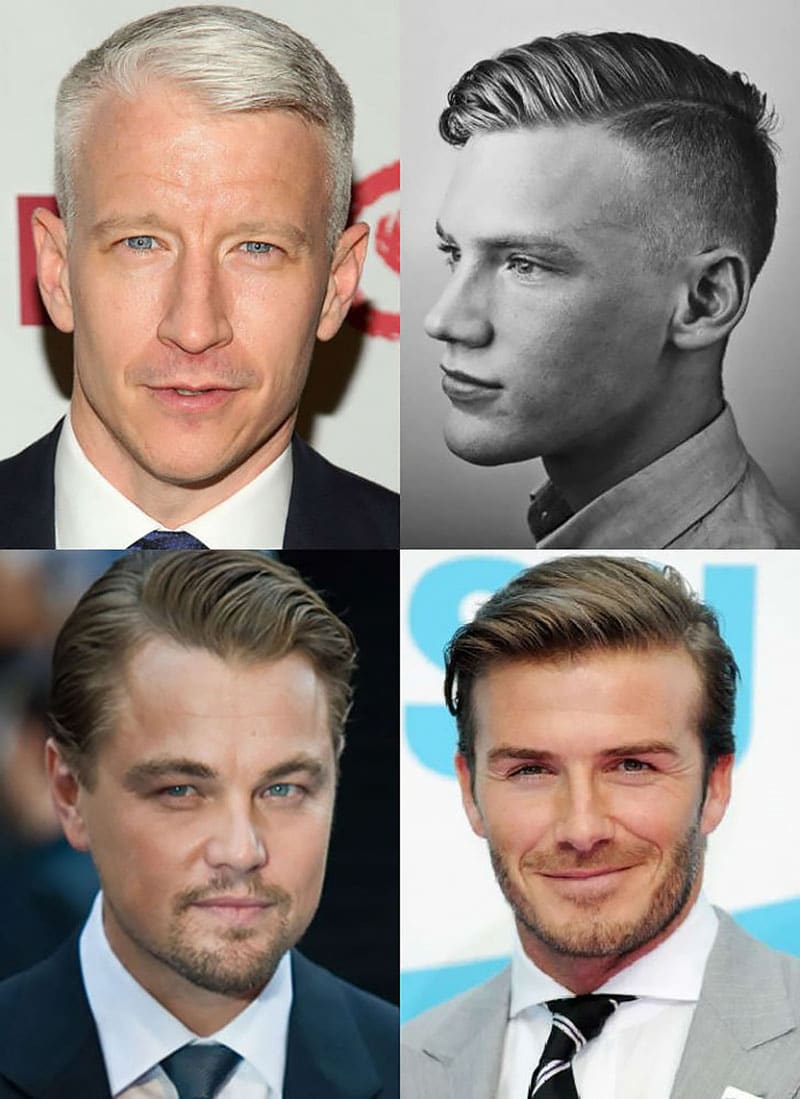 In a similar vein to the comb over, the short slicked back hairstyle is a neat and versatile look for men with a receding hairline. By keeping the cut short, you avoid giving too much weight to the top of your hair’s sides and drawing attention to the hairline. 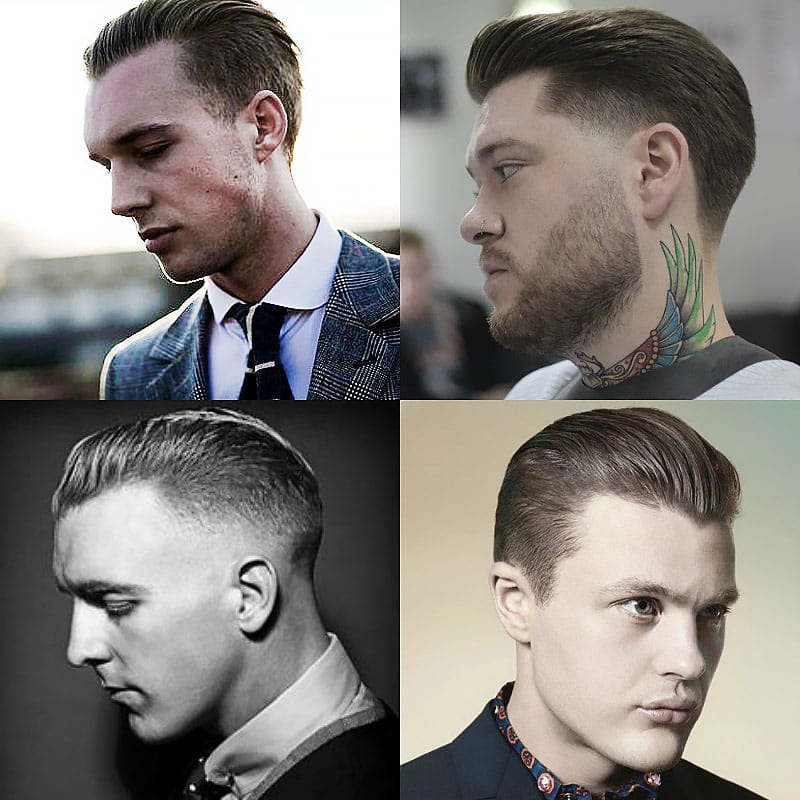 Another haircut that draws its inspiration from the military, this one boasting more length. The regulation cut is a precise imagining of a longer-haired military cut. Combed over with a defined part, the regulation employs longer, scissor-cut sides to achieve a classic style. Much like alternative versions of the comb over, this style uses the hairline as a feature of the hair’s part. 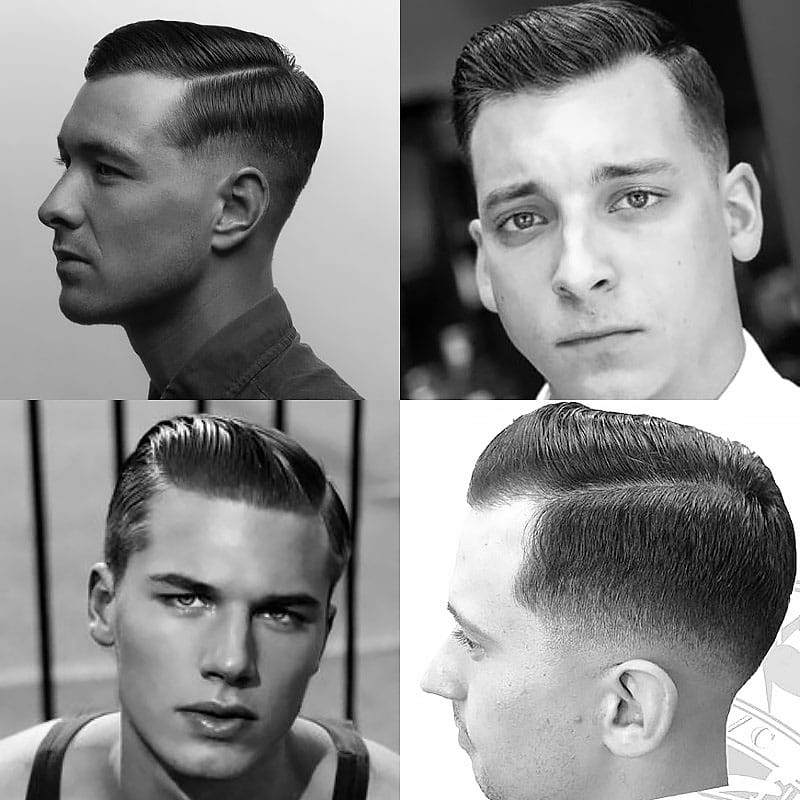 If your hair is still reasonably thick but merely receding, you may be able to try a longer style. A longer hairstyle has the advantage of hiding the area above your temples most likely to be showing early signs of a receding hairline. A more unruly option, not every man can (or should) try the longer cut. Although with the right sense of style, a longer cut can shave years from your look. 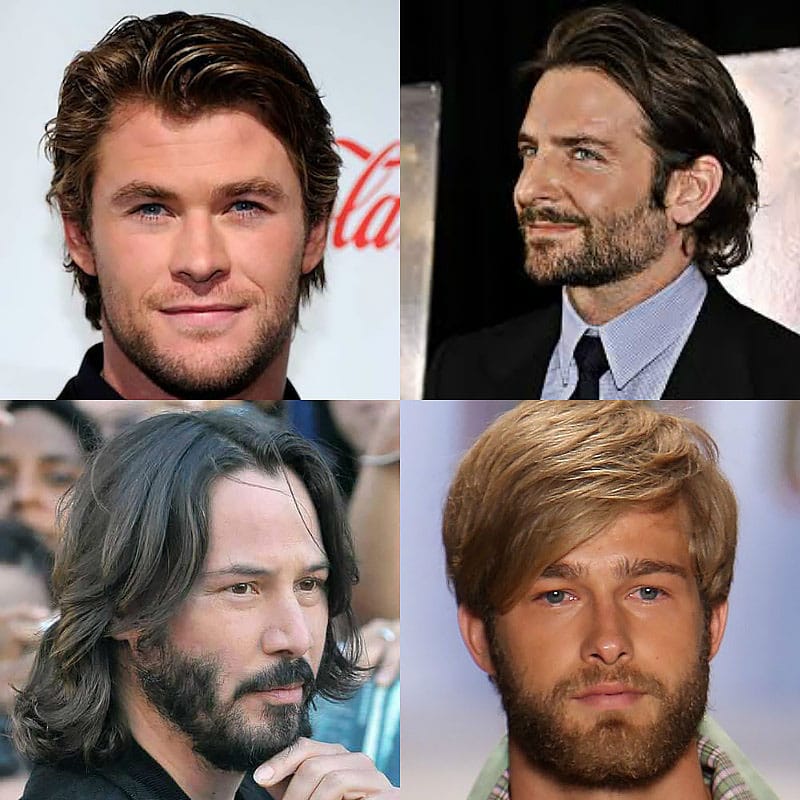 For many gents, the longer look is not a viable option. That being said, keeping your hair short and neat may not be appealing to the renegade in you either. A short, textured hairstyle gives you the versatile option of a controlled length that can appear messy. Have your barber leave slightly more length toward your hairline, blow-dry to exaggerate both volume and the textured style. 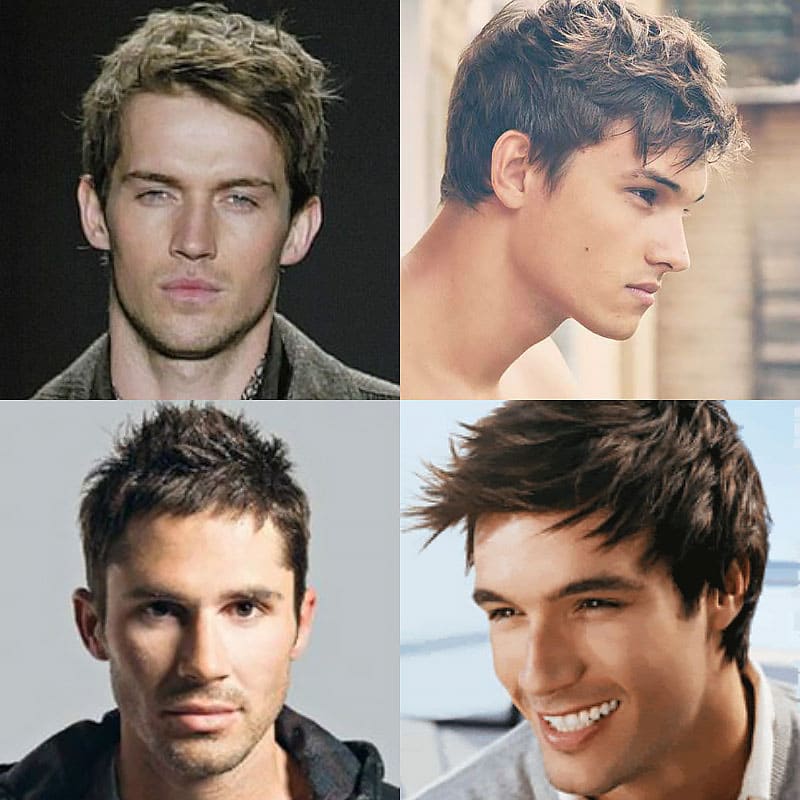 A more striking style for a receding hairline is the short high fade haircut. By clipping the sides and tapering the length from the bottom up you can control the way in which your hairline is perceived. A higher fade will draw attention away from a receding hairline and toward your longer hair on top. The style is best suited to men with a hairline in its early stages of receding. 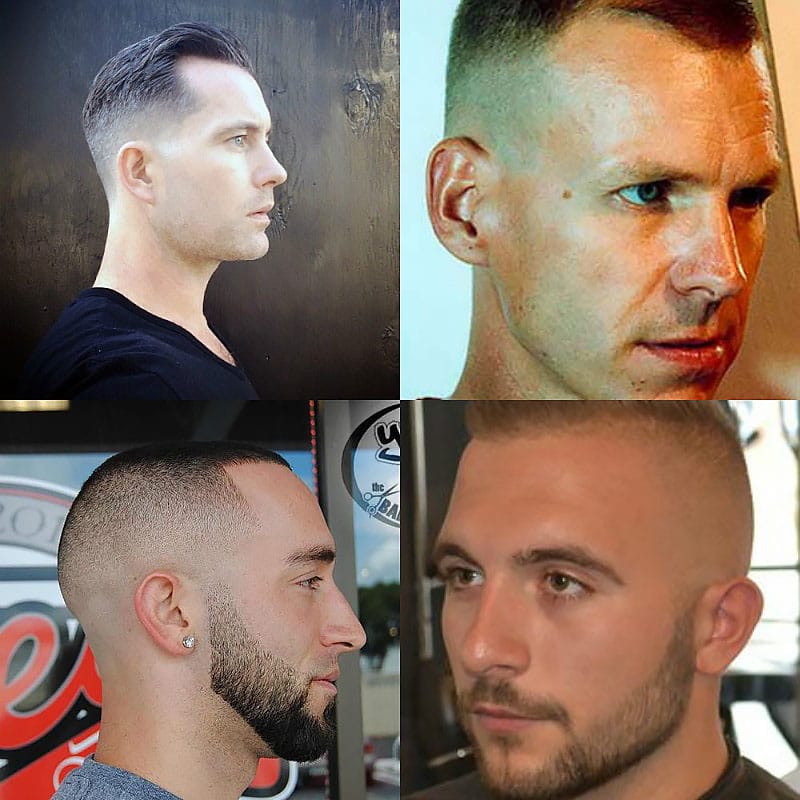 What is a receding hairline?

A receding hairline is a form of baldness, often due to androgenetic alopecia, also known as male pattern balding. It tends to be hereditary, passed down between generations. It sees hair loss around the front of your hair, often starting near the temples, which can worsen over time.

Is my hairline receding?

There are a few key indicators that your hairline is receding. If you start shedding a lot more hair than usual, this is usually the first sign that changes are happening. Shifts in how your hair behaves can also indicate a receding hairline, for example, if a cowlick is suddenly no longer causing you grief. Next, an uneven hairline is also a sign, as it often starts that way before forming a distinct M shape. Lastly, comparing older pictures of yourself will also show if you're starting to lose your hair. Because it's often genetic, you can look at your older male relatives or siblings to see what their hair is doing. If every man at the family reunion has a receding hairline, likely, you will too.

How to fix a receding hairline?

The first step is to identify why your hair is receding. It could be any number of causes, including androgenetic alopecia, also known as male pattern balding, stress, poor diet and lifestyle, a medical condition, or medication. Once you know, you'll be able to make corrective decisions. Options can include an improved diet, incorporating more protein, Omega 3, and vitamin C, as well as increasing your hydration and exercise. If that's not sufficient, hair growth products such as Nioxin and Rogaine are excellent options. As a last resort, hair transplants are a surgical option that moves hair follicles from one part of your scalp to the receding area.

Can receding hairline grow back?

As long as the follicles are intact, there is hope of reviving your locks. However, if the follicle is damaged, scarred, or has disappeared, unfortunately, you won't have much success. The most effective methods for regrowing hair are using hair growth products such as Nioxin and Rogaine. If that's not working, you can choose to try hair transplants, a surgical option that moves hair follicles from one part of your scalp to the thinning area.

Does Rogaine work for receding hairline?

If the follicles along your hairline are still intact, Rogaine, also known as minoxidil, can work. The key is consistent use. It works by stimulating blood flow to the scalp, ensuring the area is getting sufficient nutrients. Just remember that results can vary, and it may not work for everyone.