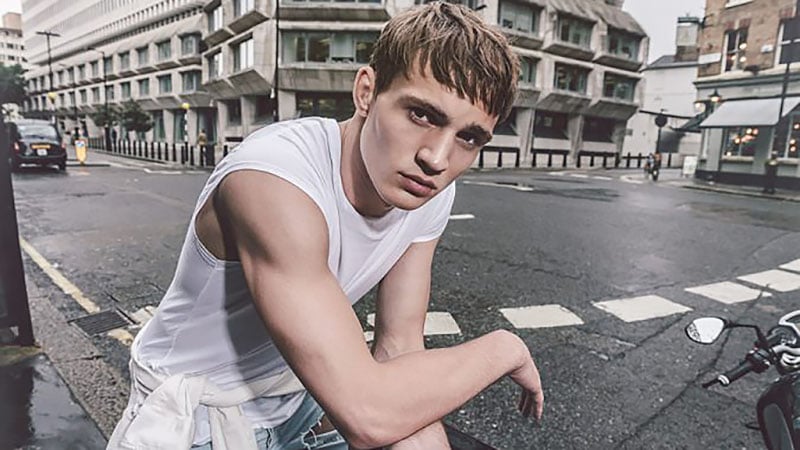 While the terrible, mushroom-looking, bowl cuts of the past are best left behind, the new breed of modern ones taking their place should definitely be embraced. Edgier, messier, and undoubtedly cooler than their predecessors, this updated range of bowl cuts is just what you’ve been looking for in a new hairstyle. The re-born cut has a fresh punk feel that’s perfect for your modern, masculine style. Find all the inspiration you need to face your fears, and once again take on the bowl cut, right here.

The classic bowl cut hits mid-forehead – similar to a short fringe – and stay the same length all the way around your head. Unlike the bowl cuts of the 1980s, today’s classic bowl cut features more texture on top and an edgy undercut effect from the buzzed, disconnected sides. 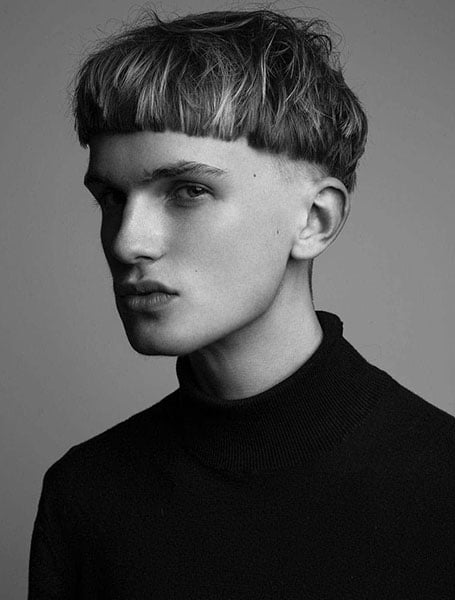 If you want to combine your bowl cut with your beard, add a low fade. A fade’s graduated look smoothly connects your facial hair and your bowl cut, softening the line at the sides. However, you’ll still retain the signature blunt fringe look of the classic bowl cut. 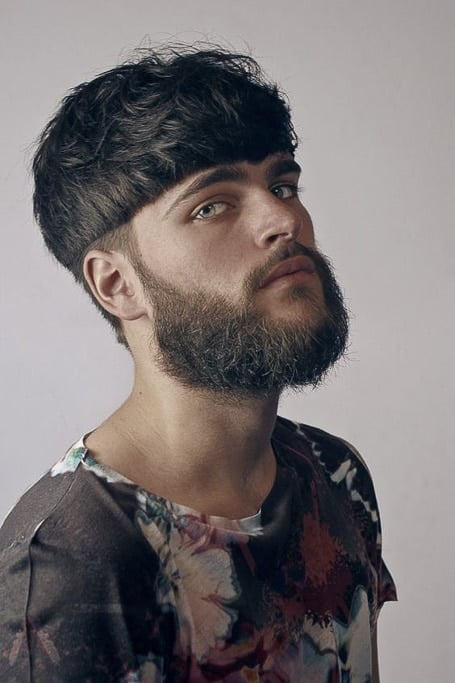 For an edgier take on the bowl cut, pair it with a mid fade. The higher line of a mid fade means more of your scalp is visible, creating a cool contrast with the thick, full top section. This haircut will ensure you stand out from the crowd and is a solid choice for guys who want to make a statement. 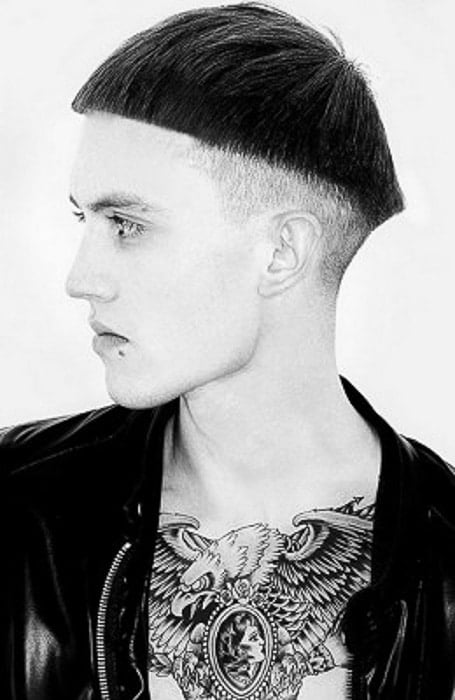 A bowl cut and taper fade haircut – also known as a mini or micro bowl cut – is ideal for guys who want a shorter, more subtle option. While the top section still has the signature blunt line of a bowl cut, it’s higher up the hairline – rather than falling on your forehead like a fringe. Instead of curving around your head, the line is blended back into a taper fade to create a modern and clean take on the bowl cut. 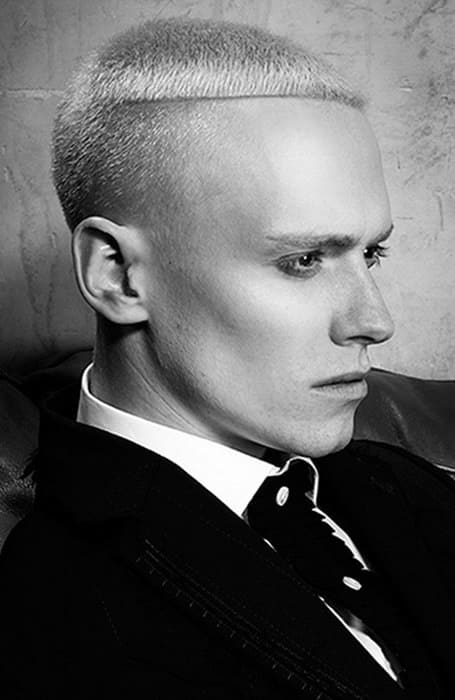 An undercut is a cool addition to any hairstyle, and the bowl cut is no different. The undercut updates the bowl cut, making it look more modern and wearable. Plus, it’s a flattering haircut for many different face shapes. That is because a bowl cut disguises a large forehead, while an undercut makes your face look slimmer and more angular. 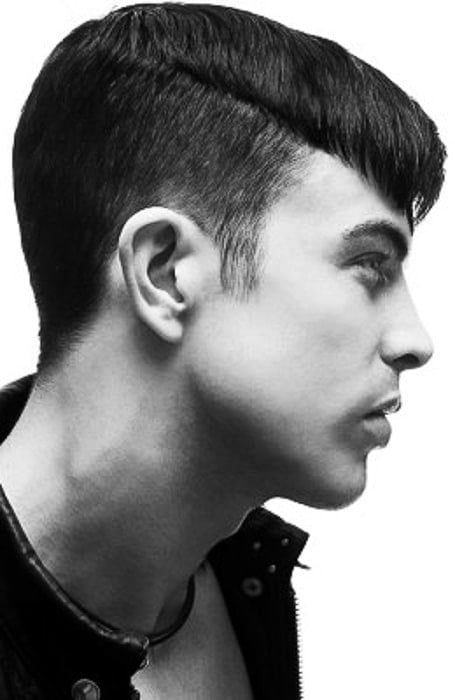 If you have naturally thick, straight hair, consider a bowl cut. The best option is a medium-length bowl cut, which you can style with pomade and a comb. Instead of combing your hair straight down, brush it forward to create a long fringe effect. An ideal cut for long, angular faces will not only balance your features but also draw attention to your cheekbones. 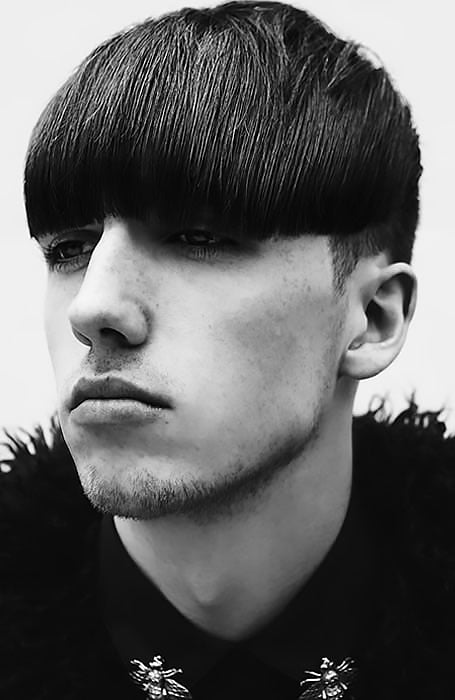 A bowl cut is best suited to those with thicker hair – however, if your hair is naturally wavy, you’re in luck. The natural volume of wavy hair makes it appear fuller. Simultaneously, the bowl cut creates more body, structure, and shape to your wavy hair, so it looks neater and less unruly. 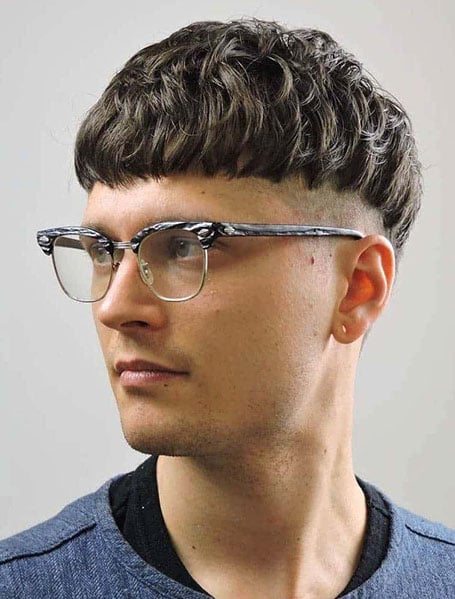 One of the best haircuts for thick hair is the bowl cut. It adds structure and shape, ensuring your hair doesn’t look like one solid mass. Simultaneously, a thick bowl cut has a cool vintage appeal, calling to mind the ’60s Mod trend. If your style leans toward the retro, you should consider this cut. 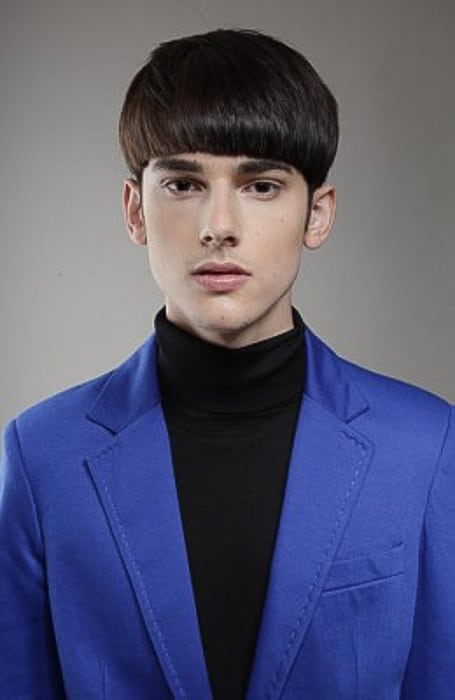 Bowl cuts are surprisingly versatile and suit a variety of hair lengths. For guys with long, thick hair, a bowl cut is a standout choice. Off-beat and retro, the cut is softer than other modern bowl cuts, which often include an undercut or fade element. Like other long haircuts for men, it will draw attention to and frame your face. 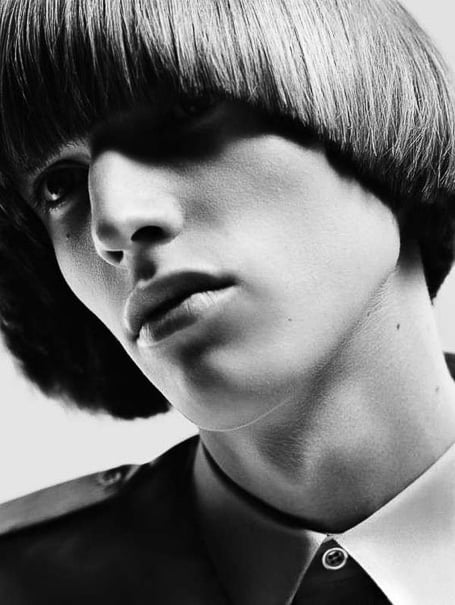 The most striking bowl cut is the bowl cut and bald fade – also called a skin fade – combination. The bald fade adds a modern twist to the classic bold cut. At the same time, the haircut has a bold, editorial look that is sure to command attention. While all hair types suit this combination, it looks particularly good with thick, straight hair. 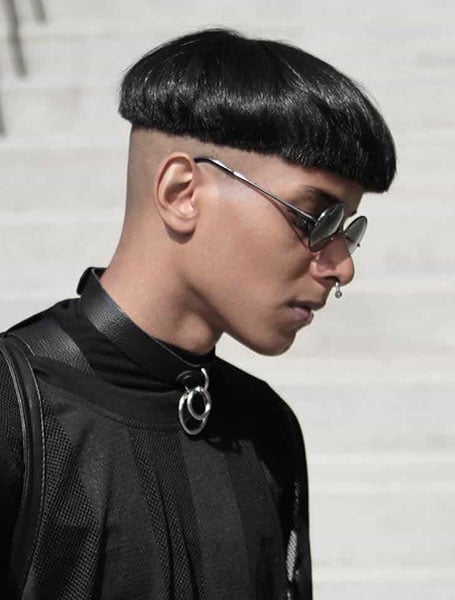 Give your bowl cut an unusual and masculine take by combining it with a skin fade and spiky hair. Spiky hair is an enduringly popular men’s style favored by many soccer players, while the skin fade adds an edgy touch to the bowl cut. The bowl cut’s blunt fringe fits with the style’s structured, angular look. 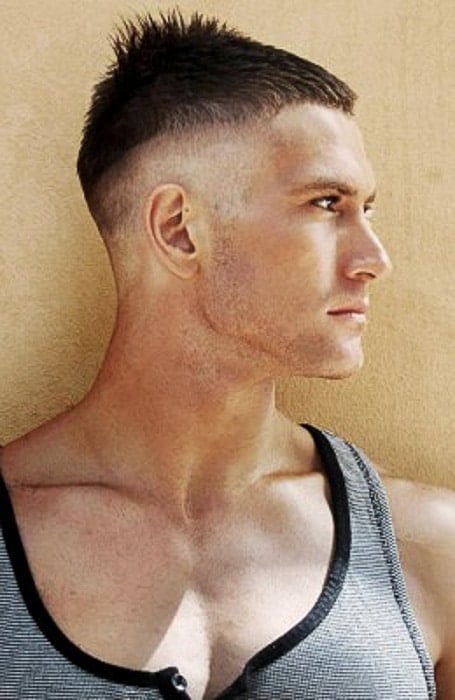 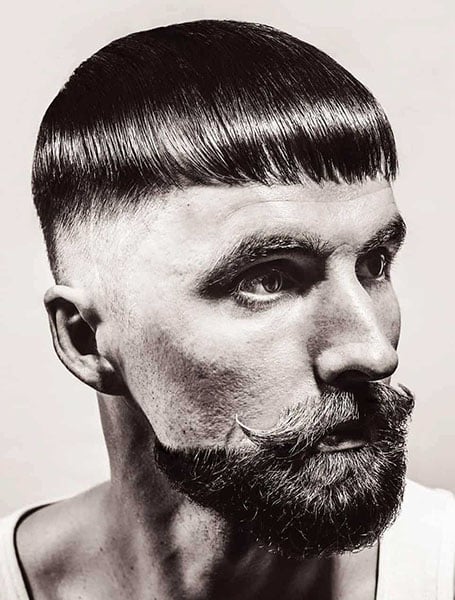 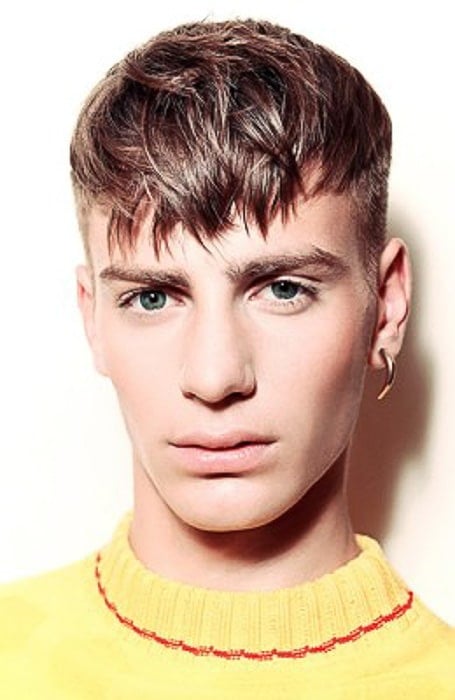 While the bowl cut is best known as a style for straighter hair types, it also works for Afro-textured hair as a bowl cut is ideal for thicker types of hair. However, while the shape of the cut is the same, the overall effect is slightly different. Afro bowl cuts tend to focus the volume in the top and front sections, with less of a ‘mushroom’ effect. 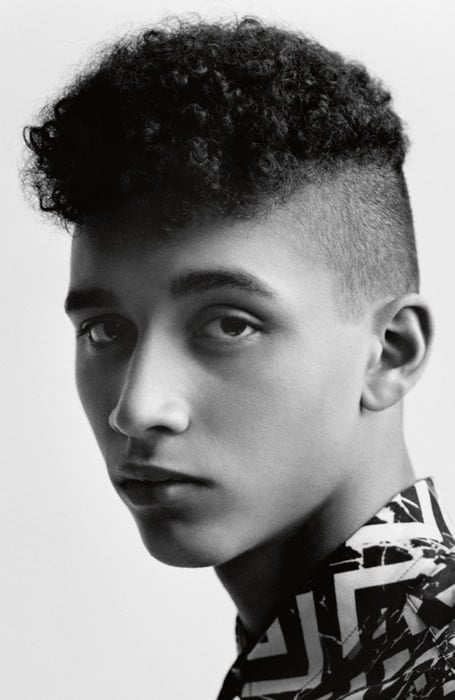 Waves are one of the most popular hairstyles for guys with Afro-textured hair. Waves have a ripple-like pattern that always stands out. To combine them with a bowl cut, have your barber buzz the sides short. Then, create 180 waves in the bowl-cut top section. The result is a fresh, modern hairstyle that still has a cool ’90s appeal. 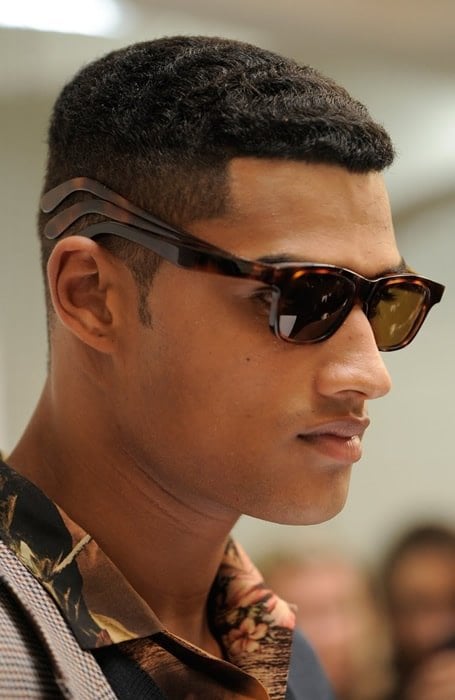 A straight hair bowl cut is a great canvas for different hair designs. The top section of the hair is relatively smooth, curving around the head. As a result, different patterns and linear designs look great when combined with this cut. Add contrasting colors for a truly individual and unique look. 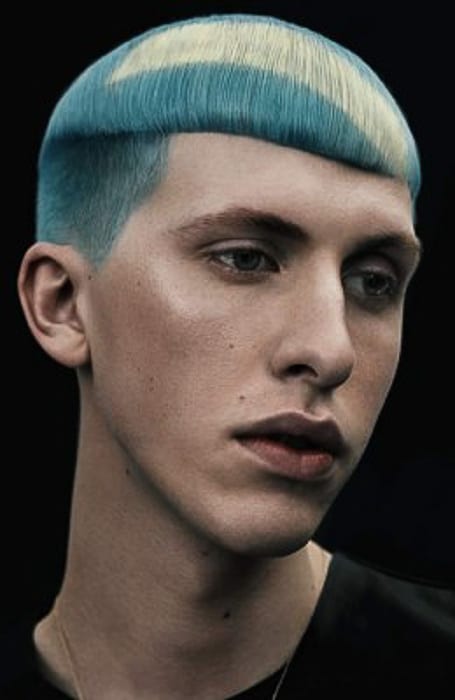 A bald fade – also known as a skin fade – is the simplest way to add an edgy and modern feel to any haircut, and the bowl cut is no exception. Ideal for those who want to make their face look longer, the cut is a bold look that suits confident men. Bear in mind that this haircut will emphasize a big forehead and the angular planes of the face. 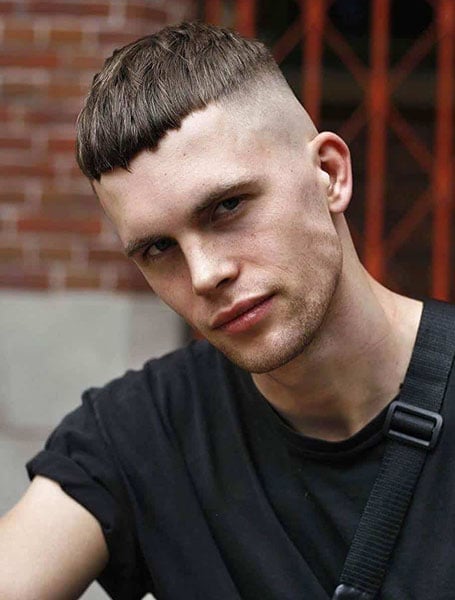 The high-and-tight haircut is ideal for guys who want a low-maintenance cut. But if you’re growing your hair out or want a fresh twist on the classic, adding a bowl cut is a great option. The bowl cut has the same structured look as a high-and-tight and looks particularly good if your hair is thick. 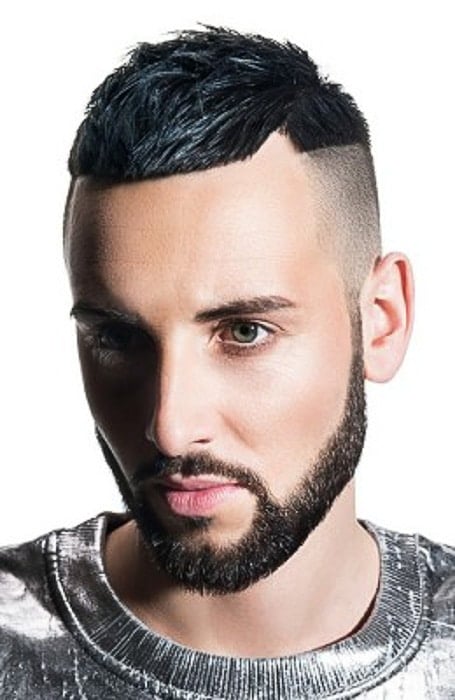 Shake up your bowl cut with a bold color. The cut’s shape makes it ideal for showing off either a bold and graphic or multi-dimensional hair color. While there are many different options to choose from, some of the most on-trend for men include grey, platinum blond, and green. 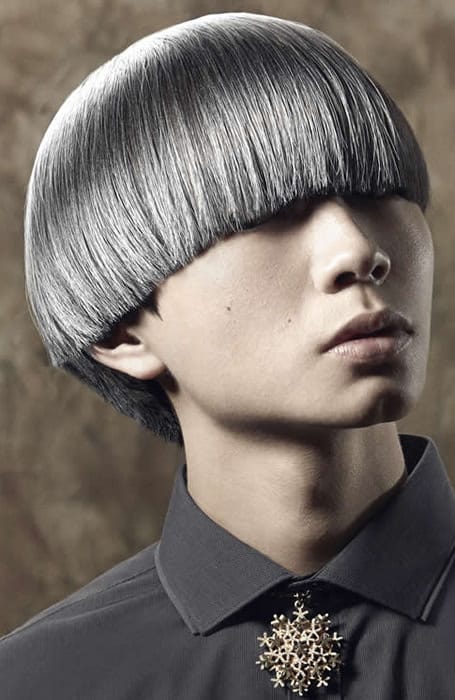 Give your bowl cut an unexpected twist by adding a drop fade. The drop fade fits with the bowl cut’s curves and angles to create a bold final result. The haircut definitely makes a statement and is ideal for guys who want a more graphic cut that is dramatic yet masculine. 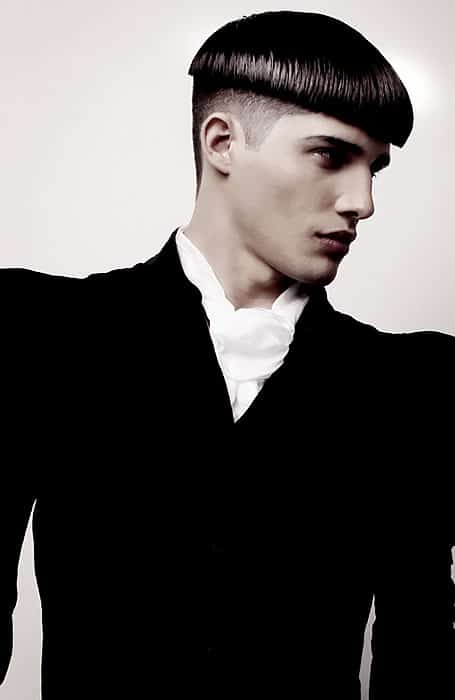 What is bowl cut?

A bowl cut is a short hairstyle that features a thick blunt fringe, with the hair on the top of the head cut to the same length as the fringe the whole way around. The hair below that level is often cut shorter or graduated down to the bottom hairline. It’s also known as a mushroom cut due to the similarities in appearance to the popular fungi.

How to do a bowl cut?

Start by choosing how long you want the top and section it off. Then, depending on how short you want to sides and back, use a trimmer or scissors to cut it to the desired length. Release the hair on top, combing it down to where it would usually sit. Take a sharp pair of scissors and carefully cut in a straight line around the head, including the fringe, making sure to keep it all the same length. If you want, you can add texture or take out excess bulk with thinning scissors.

When was the bowl cut popular?