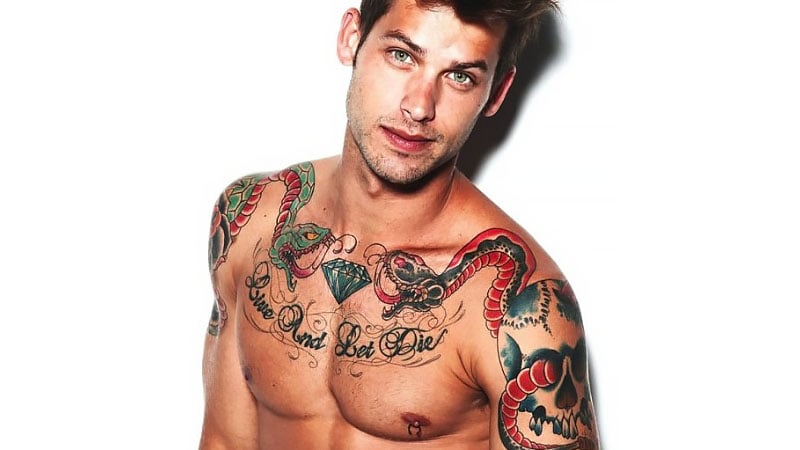 Snakes are some of the most popular men’s tattoos because of their versatility. They can be adapted to fit any part of your body, from your chest to your fingers, and the wide variety of designs means they suit every guy’s style. Whether you’re looking for an ultra-masculine inking or something more stylish and low-key, there is a snake tattoo you can customize to make it your own.

Snake tattoos have varied meanings across different cultures. Because snakes shed their skin, they are often associated with rebirth and transformation, making them an excellent tattoo choice for people who have gone through a significant change in their life. Hinduism and some West African cultures consider snakes to be spiritual symbols. In Japan, they bring prosperity, good luck, and protection. Christians may associate snakes with temptation and betrayal due to the Biblical story of Adam and Eve; meanwhile, the symbol of the ouroboros – the snake eating its tail – represents immortality and eternity. 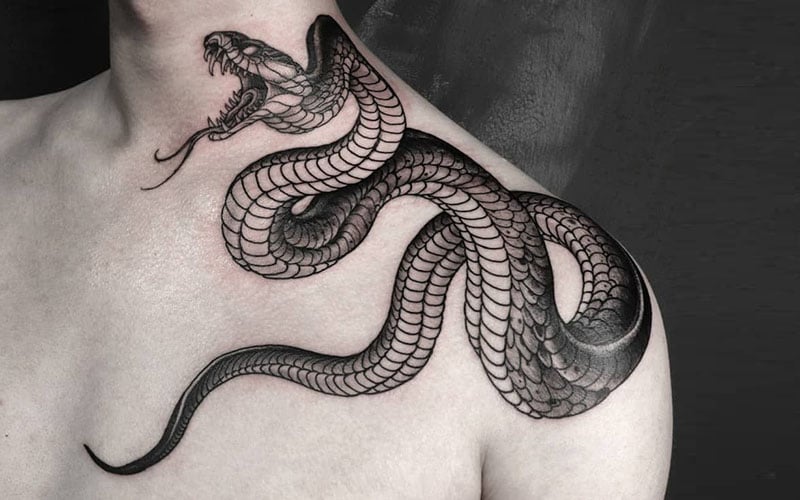 A snake-and-rose tattoo not only looks badass but is also symbolic. Roses are a very traditional and universally popular tattoo design because of their association with love; when combined with a snake, the meaning changes to one of romantic temptation and overwhelming passion. A Gothic or traditional art style would pair well with the snake-and-rose design. 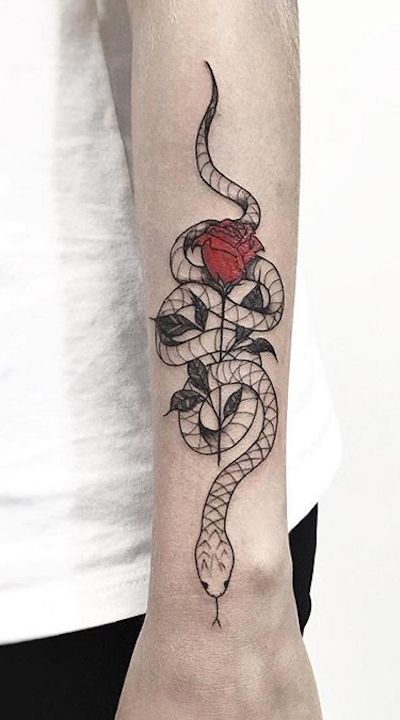 Tattoos are traditional in many different cultures, including African and Polynesian. These designs are inspired by the natural world – including plants and animals – and use black ink and solid lines to create intricate patterns. A snake is a particularly striking option for a traditional tribal tattoo because the reptile’s long, curved body is immediately recognizable, and can be adapted to suit many different placements. 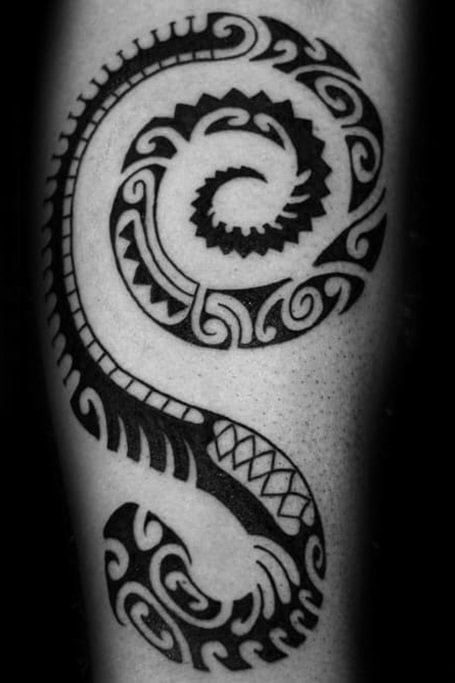 A small snake tattoo is an excellent option if you are looking for a minimal or discreet tattoo. The small size makes it ideal for a placement like on your finger, hand, or behind your ear. The general rule when choosing a smaller tattoo is to opt for black ink and simplified design, to help the inking stand out more and make it easier to touch up. 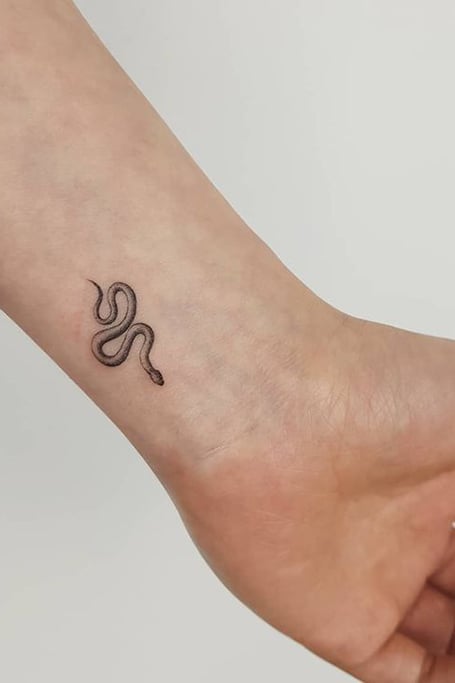 One of the main strengths of snake tattoos is their versatility. While they look great paired with a particular art style, like Japanese irezumi, simple snake tattoos are equally striking. If your style leans more to the minimal side, or you would prefer an inking that takes less time to apply, try a simple snake tattoo. 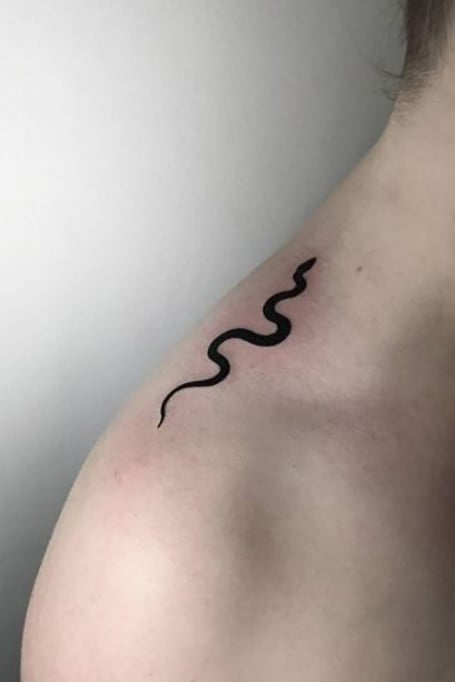 One of the coolest and most badass tattoo options is a snakehead, which makes them perfect for guys who want an intimidating and masculine snake tattoo. These designs show off the dangerous predator side of a snake by focusing on the fangs and venom. Snakehead tattoos have a lot of energy and movement and seem to jump off your skin. 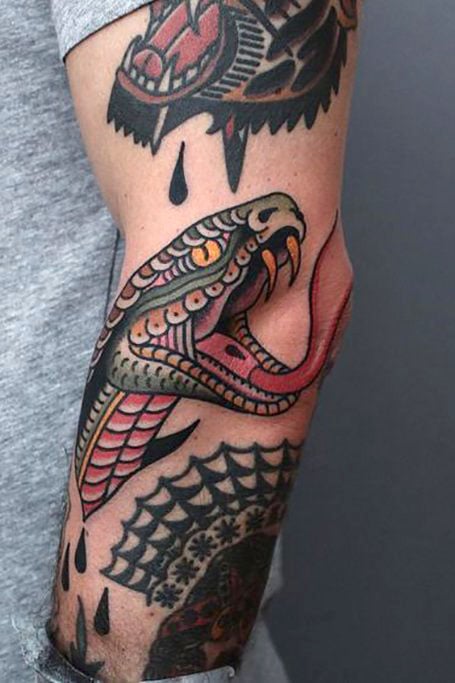 A snake and skull tattoo has a Gothic appeal and is ideal if you want an inking that stands out. It also has different meanings. While some might interpret a snake-and-skull design as symbolizing death or poison, the design also represents the endless cycle of life, death, and rebirth. Traditionally, a snake in the eye of a skull can also symbolize knowledge. 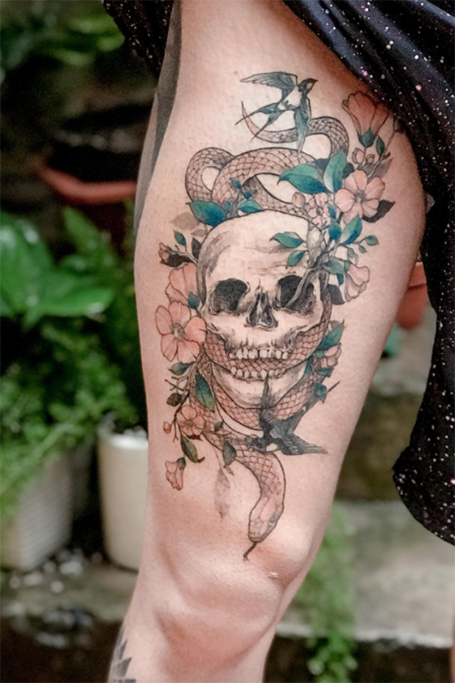 Skeletons make for a cool and unusual twist on an animal tattoo. So if you are looking for a unique snake tattoo, why not try a skeleton? Look for an artist who specializes in anatomical designs, as a snake skeleton is more complex to create than other snake tattoos. Snake skeleton tattoos look great wrapped around your arm, shoulder, or bicep. 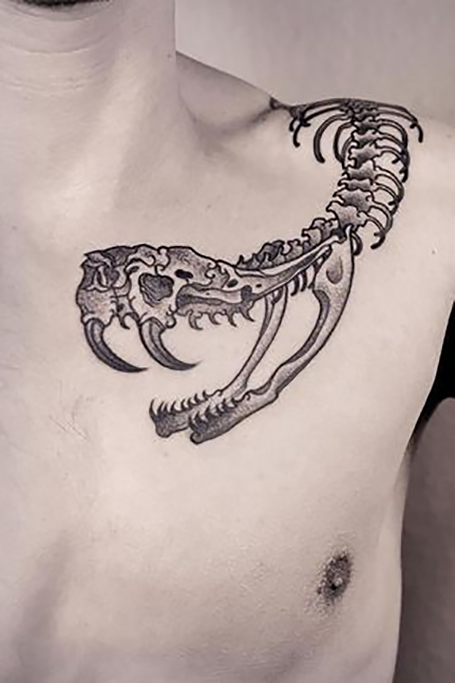 The scarlet kingsnake is one of the many animal logos used by Italian fashion house Gucci. The iconic red, black, and white snake not only looks cool, with its vibrant colors and semi-coiled pose, but it also has an interesting meaning. Scarlet kingsnakes are non-confrontational and prefer to be left alone. They are also non-venomous, meaning their bite isn’t toxic to humans. As a result, a scarlet kingsnake tattoo is an excellent choice for someone who has an introverted and peaceful personality, rather than a dominant or aggressive side. 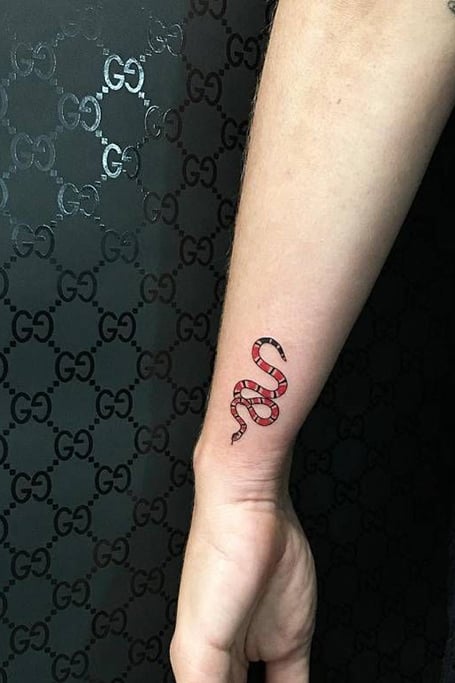 The ancient symbol of the snake eating itself is called ouroboros. The mystical image dates back thousands of years and represents the cycle of life, death, and rebirth. It also symbolizes infinity and unity. For those who want a spiritual or historical snake tattoo, the ouroboros is an excellent choice. It suits many different placements, including your forearm, chest, or back, and is bound to start a conversation. 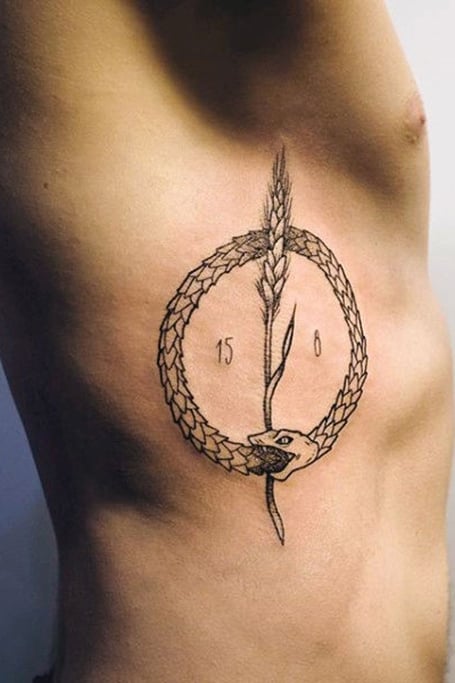 What’s better than one snake? Two! A two-headed snake makes for a fresh and badass tattoo with an interesting meaning. The two snakes represent an internal battle – two opposing parts of your personality that need to unite, such as your aggressive side and your peaceful side. A two-headed snake can also represent having two ‘paths’ in life and making difficult choices. 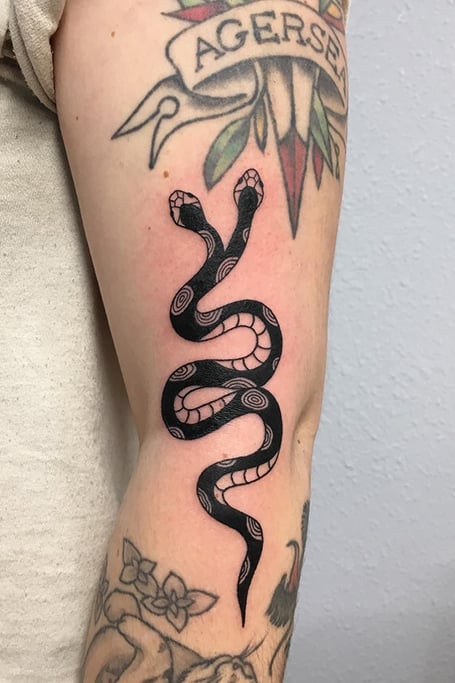 One of the most dangerous and venomous snakes on Earth, the Black Mamba, is native to Africa and known for its incredible speed and agility. It is also known to be very aggressive when threatened, despite its harmless appearance. As a result, a Black Mamba tattoo is an excellent choice for guys who can relate to the snake’s qualities. Basketball fans could also consider this tattoo as a tribute to Kobe Bryant, whose nickname was Black Mamba. 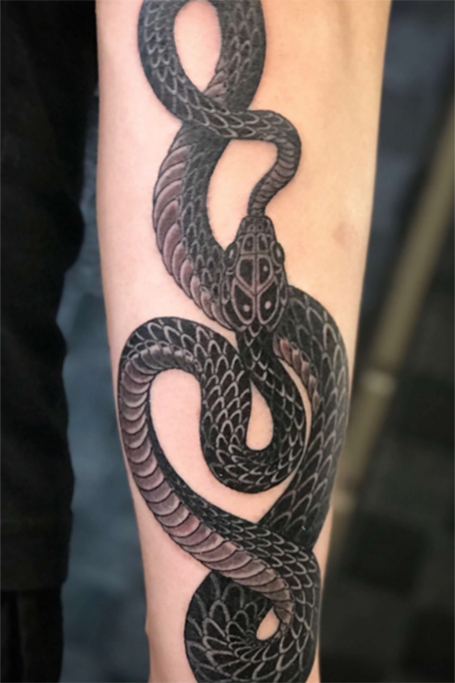 A unique snake tattoo option is a snake eye. Similar to a dragon eye tattoo, the inking stands out due to its intimidating and reptilian appearance. Your artist can use a saturated yellow or green ink to create a bold tattoo that is true to life while adding white ink details and black shadow to create the illusion of depth. Make sure there are scales around the eye to add to the snake effect. 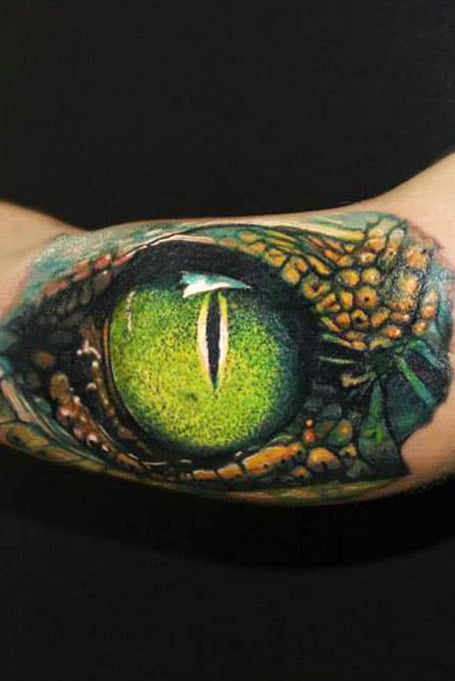 One of the best snake tattoo options is a wrap-around design on your arm. The slim, curved bodies of snakes make them ideal for placements on muscular parts of your body, like your bicep. The design could wrap around one section of your arm or even create a semi-sleeve effect, running from your wrist up to your shoulder. 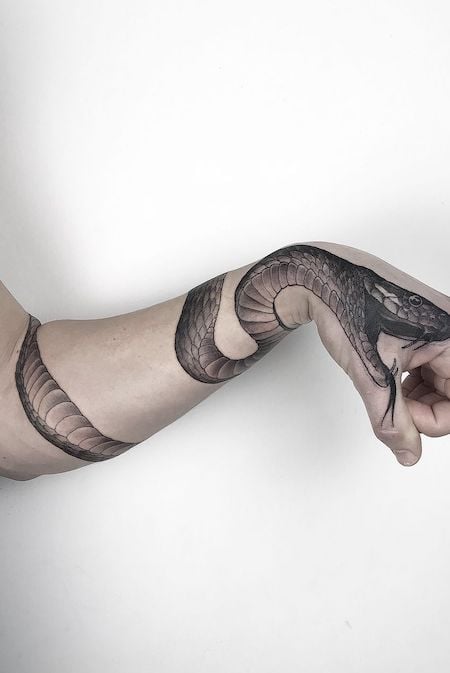 A popular option for a snake tattoo is to place it on your forearm. Because the forearm is a long, narrow placement for a tattoo, it is ideally suited to a snake design. Plus, you will always be able to look at your inking as well as easily cover it up with a long-sleeved shirt. For best results, go for a semi-coiled snake and customize it with other elements like a dagger or leaves. 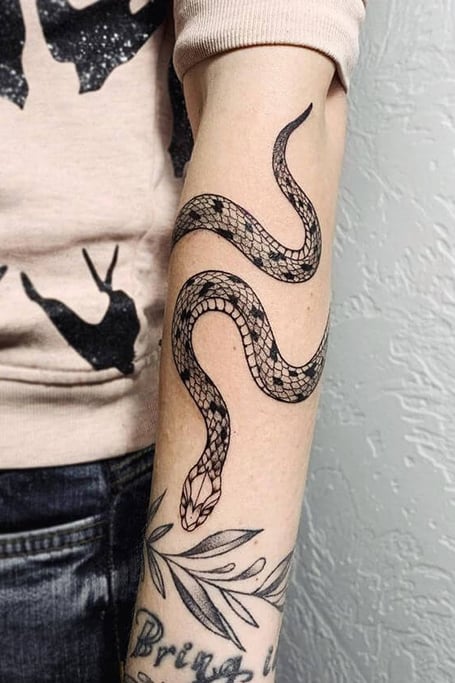 One of the best snake tattoos is the snake shoulder tattoo that extends to your bicep. Not only does the tattoo draw attention to your shoulder muscles, but it also has a cool and edgy look. While many guys choose a striking snake – one with visible fangs, about to attack – for a more intimidating effect, you could also choose a regular snake to represent the wise and protective aspects of the creature. 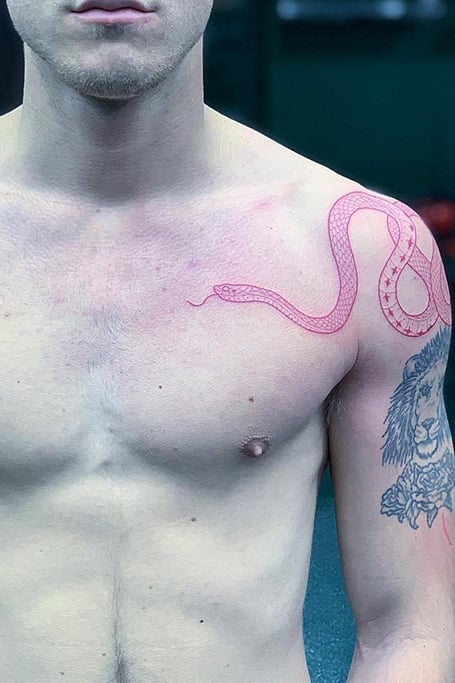 Finger tattoos have become very popular over the past few years, and snakes are a great choice for this placement. A small black-ink snake looks great on the side or top of your finger. You could also try a wrapped design. Some people even choose snakes as a badass matching couple’s tattoo, as the design suits both men and women. If you already have multiple finger tattoos, a snake is a great addition to your ink collection. 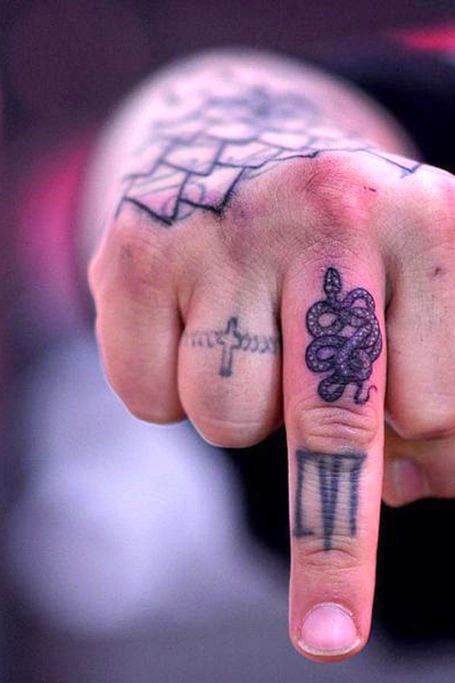 Snake tattoos aren’t just for long and narrow parts of your body like your arm or finger – they can also be adapted to suit wider, flatter placements like your hand. However, bear in mind that tattoos on your hands tend to lose their shape and fade faster than others because they are constantly moving and being used, as well as being washed more frequently. Choose a simple black-ink snake tattoo that will be easy to maintain and fresh up over time. 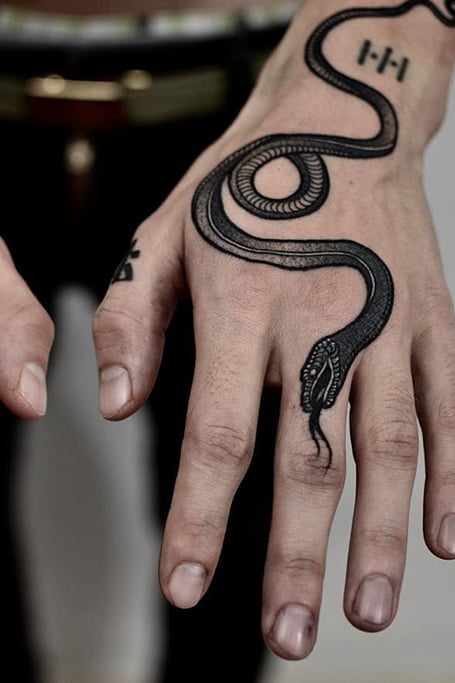 Snakes are an excellent option as the ‘anchor’ for a sleeve – that is, a tattoo or collection of tattoos that span from your shoulder to your wrist. Many men choose a detailed snake as the central design of their sleeve to give it a structured look and an edgy vibe. The rest of the sleeve can then be customized with other tattoos, such as Japanese-style flowers or waves. 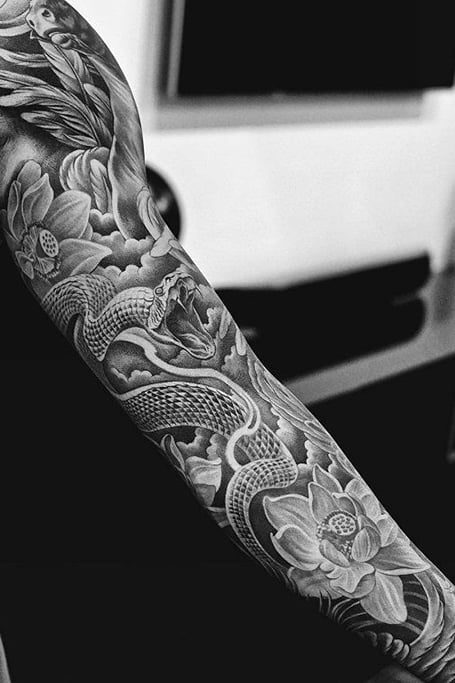 For guys who want a larger tattoo that can be covered easily, a thigh inking is an excellent choice. Plus, your thigh is one of the least painful places to get a tattoo, so your extra time under the needle will be more bearable. Choose a design with more curved lines, as it will work around the muscle without warping. Some possible options are a realistic 3D snake or an intimidating design like a striking cobra. 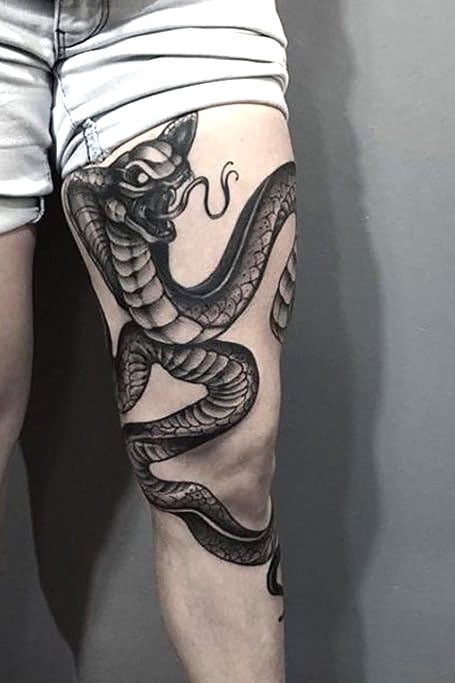 For the ultimate snake tattoo, why not choose a full back-piece? Your back is the ideal placement for a huge, detailed folded snake design. One awesome option is a Japanese snake tattoo with other traditional symbols, such as chrysanthemums, peonies, waves, koi, or phoenix. You could also pair a snake back tattoo with a tiger or dragon design. 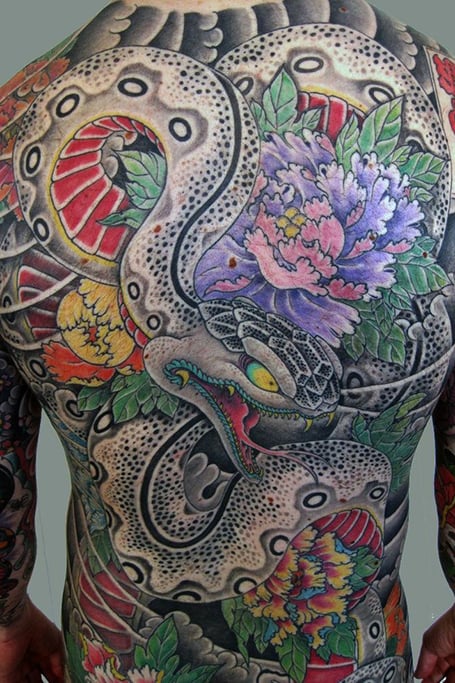 Leg tattoos have become very popular in recent years and snakes are a great option if you want to embrace the trend. The shape of a snake means it can be adapted to fit your leg without warping over the muscles. For a unique result, combine your snake tattoo with a circular design on your knee, such as an evil eye. Alternatively, a wrapped snake design also looks very striking. 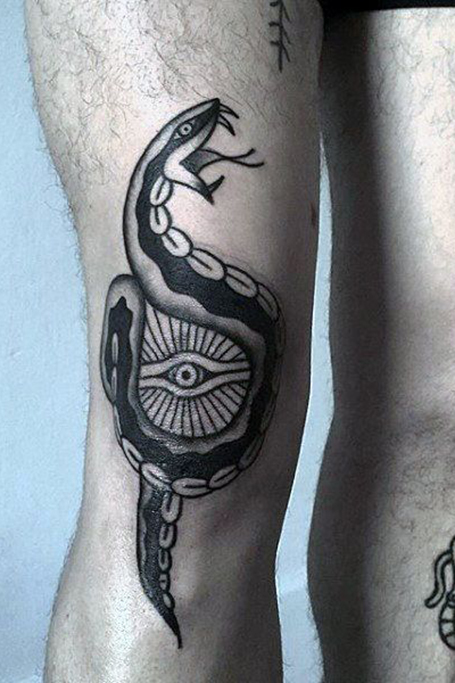 Your wrist is a great place for a snake tattoo. There are many different options to choose from, including a wrapped design or small, simple coiled snake. A wrapped snake creates a subtle ‘cuff’ effect, similar to a banded tattoo. You can also extend your snake wrist tattoo further up your arm to give the inking more impact. 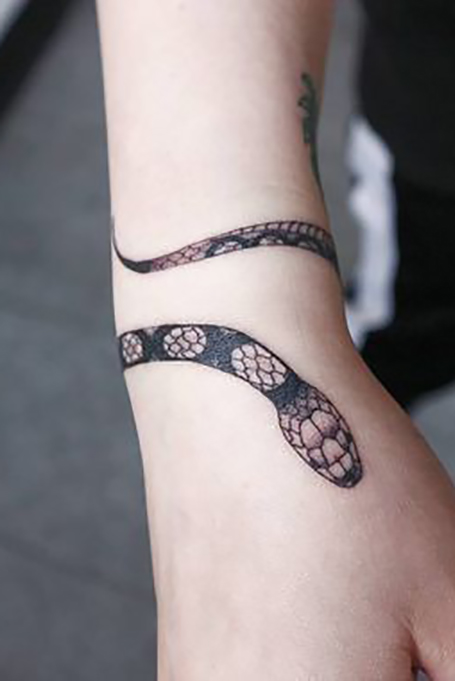 Ankle tattoos are an excellent option if you want a snake tattoo that you can easily hide under trousers or socks. You have plenty of design choices too; an ouroboros would look cool as a circle around your ankle bone, or you could go for a wrapped or coiled snake. Alternatively, a snake inking that starts on your foot could be extended up to your ankle for a more detailed and complex final result. 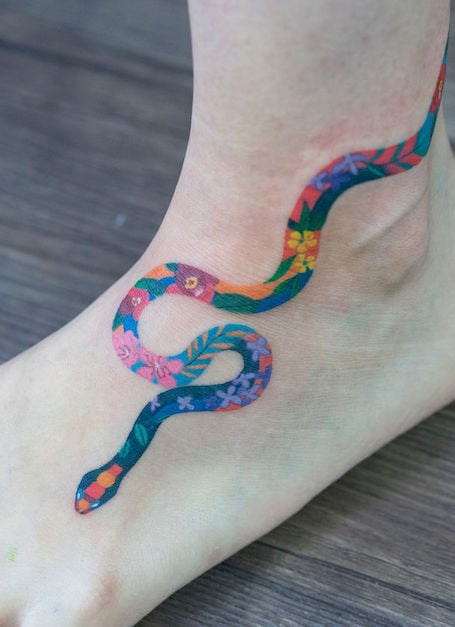 Like your back, your chest is an excellent placement for a larger and more detailed snake tattoo. A dynamic, full-color chest tattoo – like a snake and eagle, or snake and dragon – would look awesome. While tattoos in the center of the chest have been trending lately – particularly for those who like the disconnected Old School art style, other options include a pec tattoo that connects to your bicep inking. Whatever you choose, a chest tattoo is still a statement piece that you can show off whenever you remove your shirt. 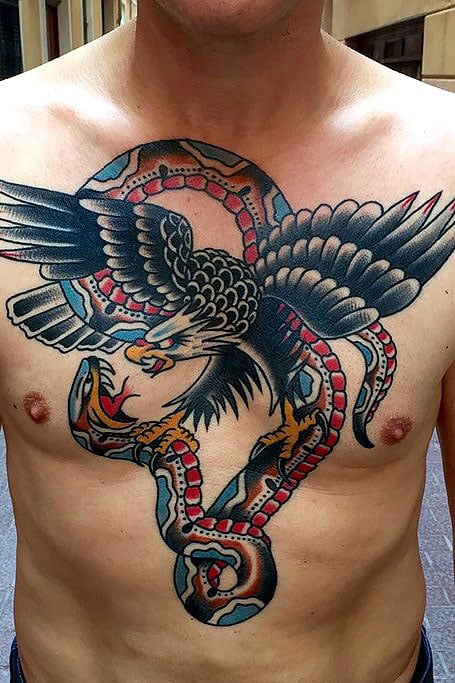 Guys who want a serpent inking that stands out from the crowd should consider a realistic snake tattoo. Your artist will create a lifelike 3D design using shading techniques. Because a realistic tattoo has more detail than simpler designs, it’s best to choose a larger placement, such as your chest, leg, or back. Add saturated color for an even more eye-catching and realistic result. 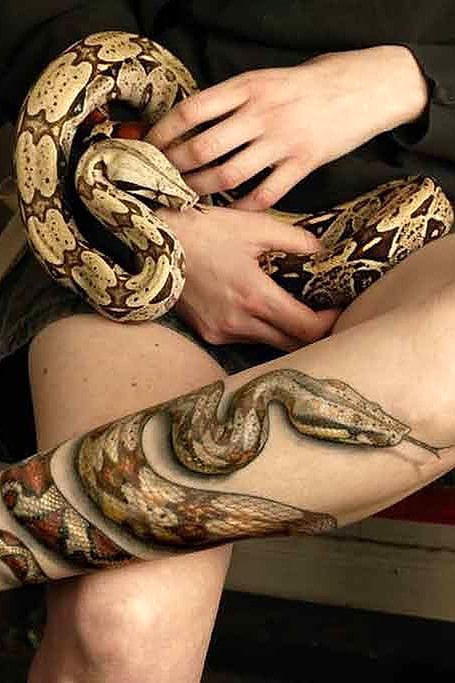