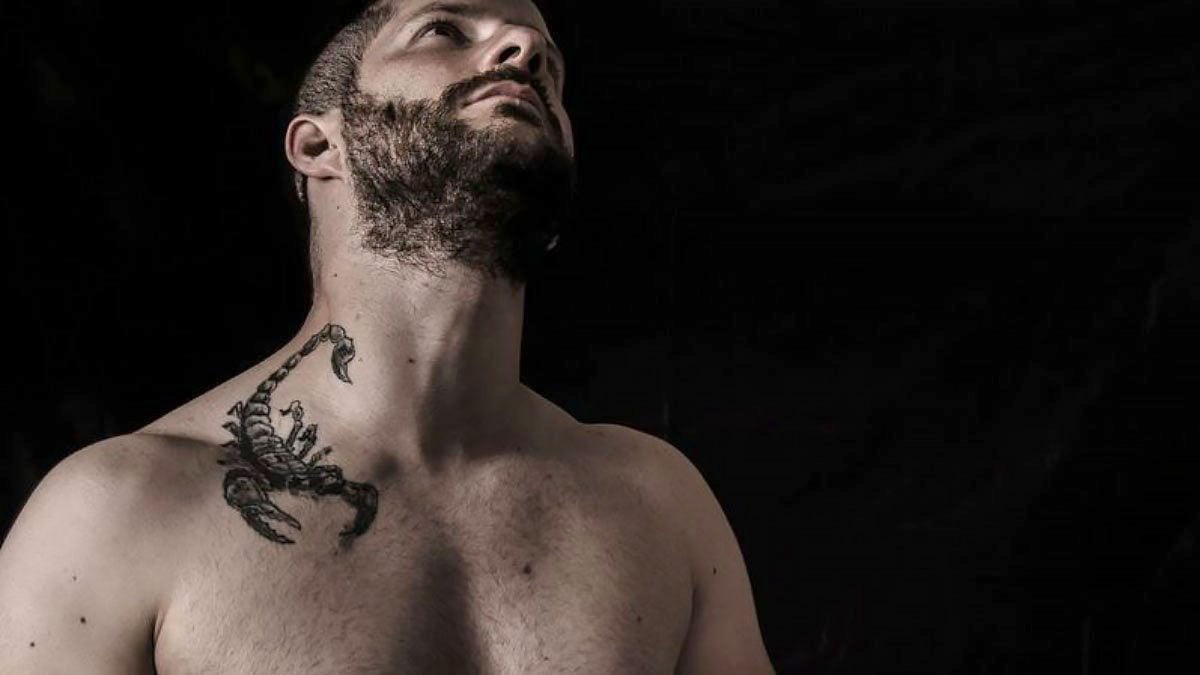 Scorpions have become the desired symbol for men to tattoo because of the meanings associated with these arachnids. They can represent intimidation and fear, and they certainly have that effect when inked in a large design on a man’s body. Or they can symbolize strength, loyalty, and protection. It is a creature that is feared, because it can cause harm, but also respected, a combination which is attractive to many individuals. The appeal is also in their versatility, and the shape can suit a wide variety of designs, from bold and bright, to straightforward, yet masculine. If you’re looking for some inspiration for your latest tattoo, and want something that will demand attention, look no further!

Most scorpion tattoos can be frightening, and those who choose to ink them create a menacing appearance. Many people decide on arachnids because of their symbolism. On the other hand, there are fans of films and games involving scorpions who have drawn inspiration for their tattoos in this way. Scorpion King is a film following the story of a desert warrior who rises to protect his homeland. The idea of bravery, courage, and loyalty is appealing to many men. The sword is also symbolic here, as it is the character’s weapon of choice. 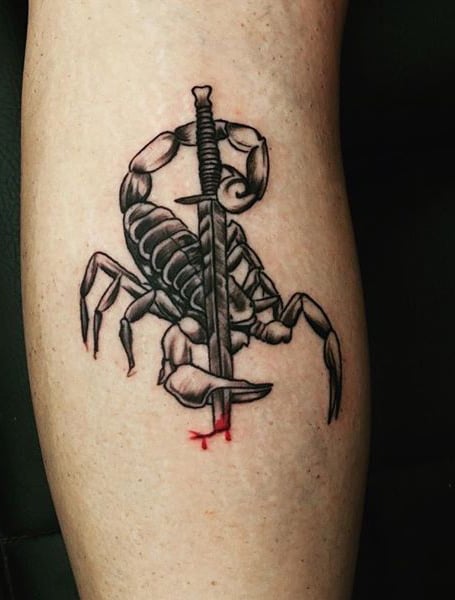 Individuals who find beauty in shapes and lines will be drawn to the style of geometric tattoos. A lot of thought goes into the design and creation of these pieces, which are often complicated, yet simple at the same time. The artwork’s overall effect creates a modern element. Typically, they look best when done in black ink, without shading, but incorporating another color, such as a bright red, can work well with a scorpion symbol as it makes it even more intimidating. 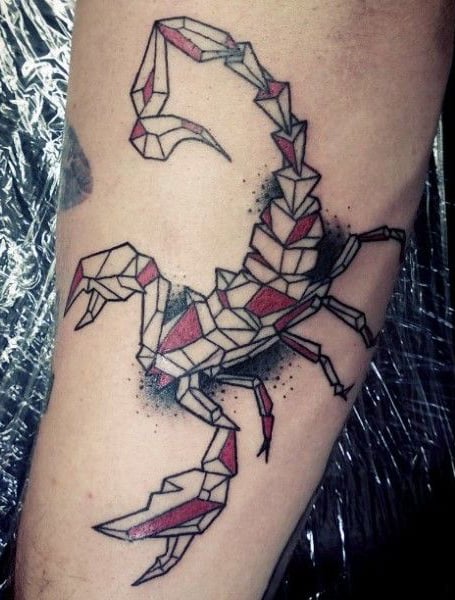 Realistic tattoos are gaining popularity among individuals who want to have work done that looks eerily similar to the real thing. The design can be even more intimidating because the creature comes to life on the skin, almost as though it is crawling on you. An approach like this is one way to get noticed but also sends a powerful message. The piece could serve as a warning to those who see it, telling them not to mess with the wearer. Alternatively, someone may choose this look simply because they wish to instill fear in others. 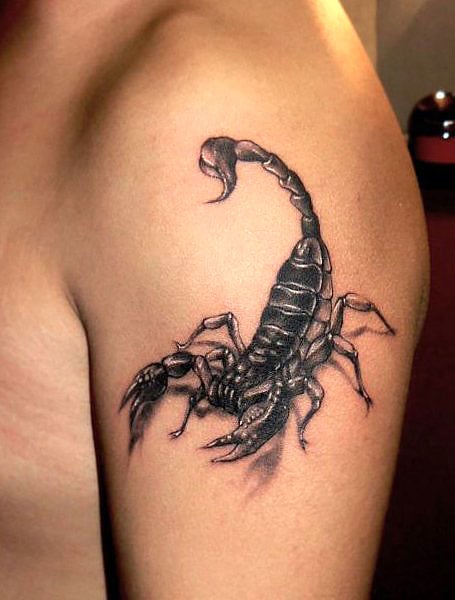 The use of only black ink can be very appealing for a tattoo, but choosing to get a scorpion symbol is about more than just the color. Firstly, the design appeals to those who want to intimidate. The arachnids represent several things, including resilience, strength, protection, and even death. The color choice makes the details of the design visible, and also adds a realistic element to the tattoo because although scorpions come in a range of hues, one of the most common is black. 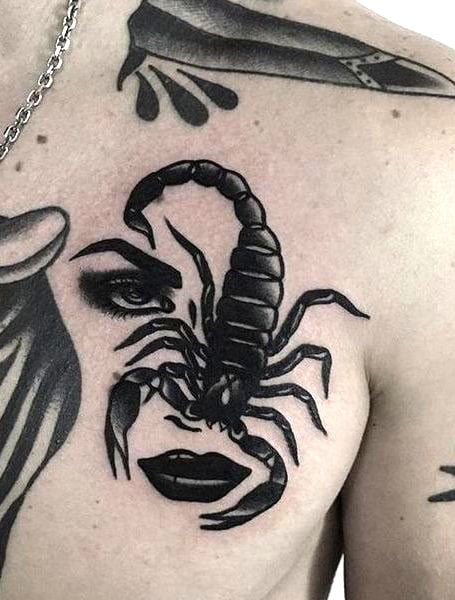 You don’t have to spend loads of time and money to get inked with something meaningful, and small tattoos are increasing in popularity. The great thing about little designs is that you are not limited to placement options, and you can choose to have the ink done wherever you want, whether that be in the inside of your wrist or behind your ear. Scorpion symbols work well as small pieces and can be very eye-catching. Another pro is that they are discreet yet badass. 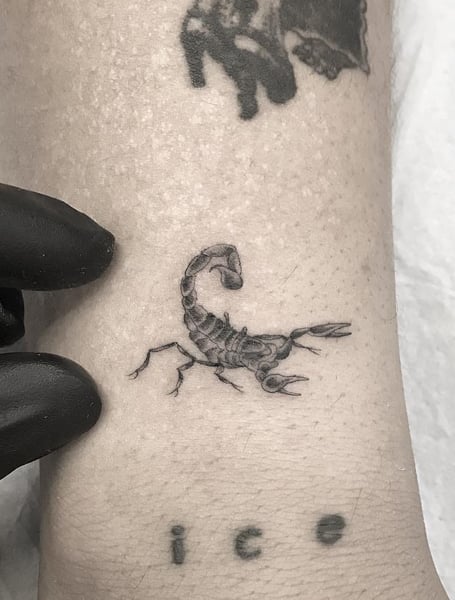 The scorpion and the rose are a balance between beauty and pain; both can cause harm, the predatory arachnid with its poison, and the rose with its thorns. The rose is a universally recognized flower and adds a Gothic element to many tattoos. This particular combination often appeals to those who want their ink to act as a reminder of how others cannot judge them. It also serves as a warning; getting close to these individuals can be beautiful, but also dangerous. 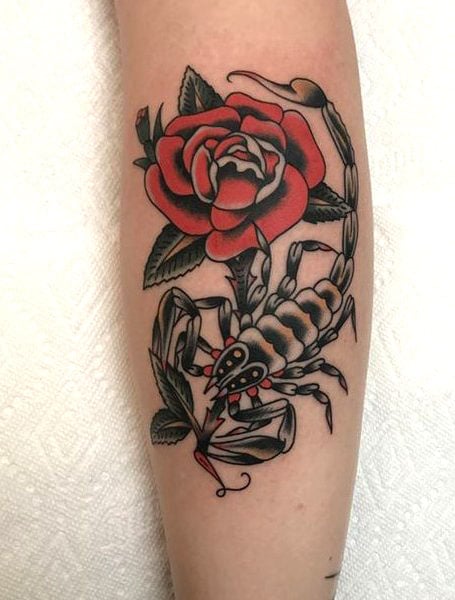 There is something to be said about the use of color in tattoos, and it can make an eye-catching statement. Red is a popular choice for scorpion ink because the pop of color brings the design to life. Although these creatures are not typically this hue, there is a particular species with potent venom known as the Red Indian scorpion, native to India. Whether your ink is a nod to this predatory arachnid, or you merely like the bold artwork, well, this is open to your interpretation. 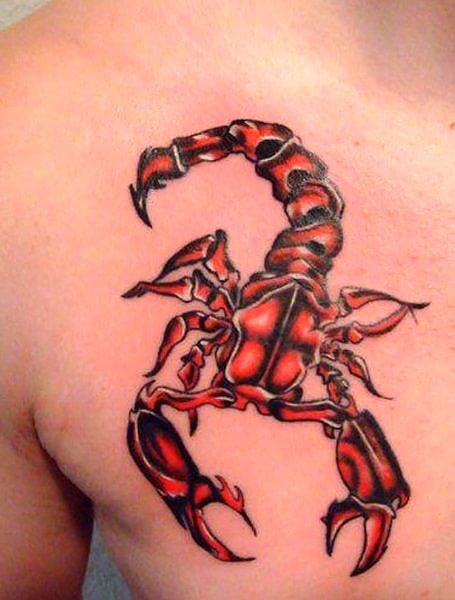 8. Scorpion and the Frog Tattoo

The combination of a scorpion and a frog may seem strange; after all, you may be wondering what do these two creatures have in common?! The tattoo has deep meaning and relates to an ancient Sanskrit story. As the tale goes, a scorpion needed to cross a stream, but could not do so without the frog’s help. The amphibian was hesitant at first, knowing that this creature could kill him, but was eventually convinced and carried his new companion across the stream, only to be stung halfway. Both animals perished, and the arachnid argued that he could not help his actions because it was in his nature. The lesson to be taken away from the story is that trust has to be earned, and people can let you down. 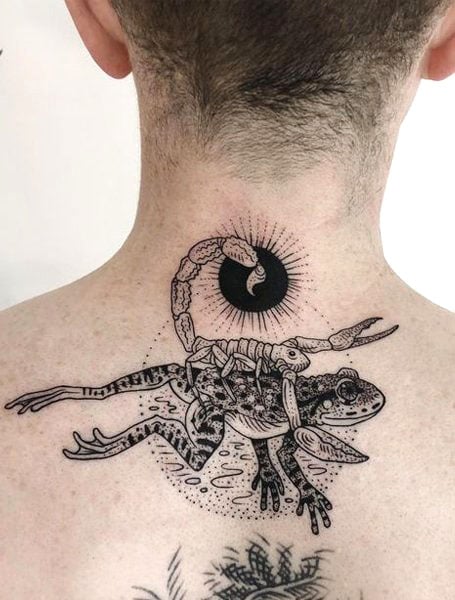 A scorpion can represent many things, but it is most commonly associated with death and aggression. Although there are various interpretations of what this creature can symbolize when paired with a heart, it takes on an entirely different meaning. The combination reminds the wearer to protect their heart from those who can cause them pain. The balance between love and desire, and this arachnid, signifies the importance of staying guarded and protected.

Fans of fighting games will be familiar with the formidable character, Scorpion, from Mortal Kombat. He is a resurrected ninja and an antagonist. He has two very different sides to him; a vengeful and angry personality, but also the ability to be caring and honorable. The character is incredibly interesting looking and makes for a fantastic and detailed tattoo. That’s not all, though; his traits can also be relatable.

Sometimes the beauty of a tattoo is in its simplicity, and minimalist pieces are increasing in popularity. If your style is more on the conservative side, then this design will appeal to you. For men who want a classic but fresh look, black ink and basic outlines are the way to go. A scorpion symbol works well without the shading and color and still makes a statement. The understated design can also draw more attention to its subject, which in this case could represent endurance, toughness, and death, or even protection and loyalty. 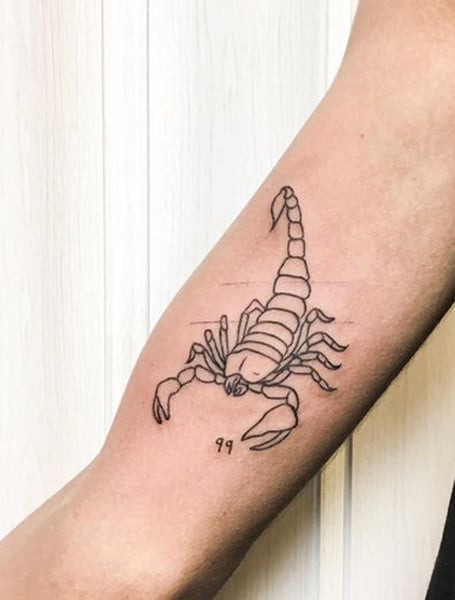 If you want to show off your ink, then what better place to do it than somewhere noticeable, like on your hand?! This area works well with bold pieces, and should be reserved for something that means something to the wearer; after all, he will see it every day. It is, however, essential to be aware that hand tattoos can fade faster than other locations because of the frequency we use and wash these surfaces. Still, if you want people to notice your design, this is the spot for it. 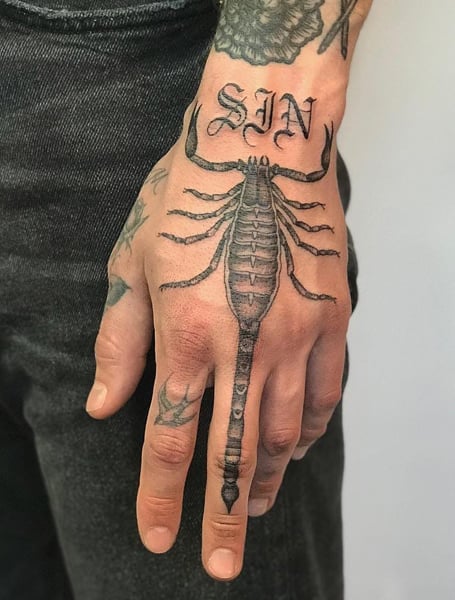 Neck tattoos can be intimidating, but there is no denying that they look cool. They were once reserved for criminals, but this has changed over the years. When choosing to get a tough design, the placement should also be considered.  The scorpion represents deadly power, and the neck is one of the most painful areas to get a tattoo. Thus, the combination makes it even more badass. The sensitivity in this area will guarantee you some discomfort, but then again, the ink is all about showing fearlessness and strength. 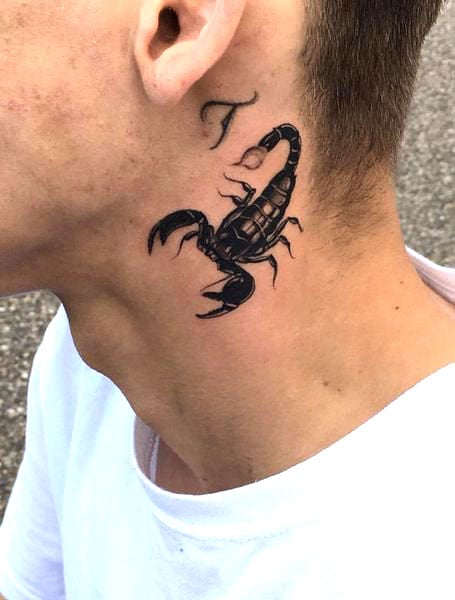 One of the least painful places to get a tattoo is the forearm, and the outer area will cause even less discomfort than the inner. It is also an excellent location for symbols that require more detail and, therefore, a larger area of skin to complete. It also works well for long, narrow designs, like a scorpion. Depending on the complexity, shading, and size of the piece, you may endure some mild discomfort. 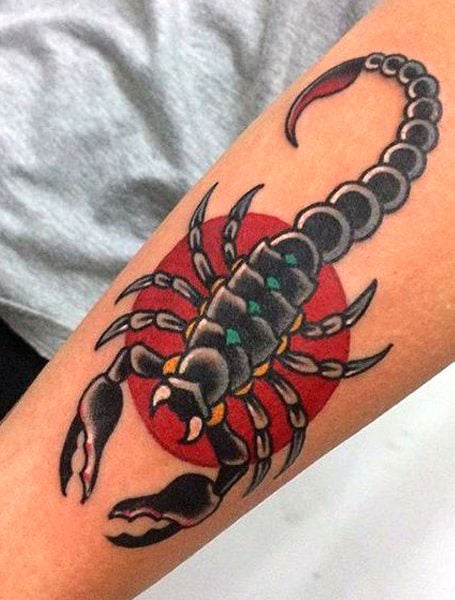 A scorpion chest tattoo represents strength and has a menacing appearance. It’s a location that can be shown off when you wish but covered up for when you would prefer to keep your ink private. There are many positives involved with this placement, but there is also a downside; the chest is one of the most painful places for tattoos. The reason for this is due to the sensitivity of the area and the proximity to the bone. 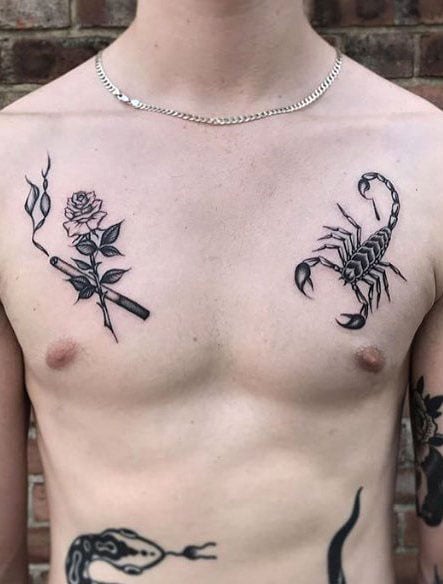 For men who want a more elaborate tattoo, the thigh is an excellent choice. The large area allows for designs to come to life. It can also be covered with clothing for when you would prefer not to show off your artwork. Another appealing thing about this location is that it is one of the least painful places to be inked. That said, if you ink the inner thigh, you can expect more discomfort due to the sensitivity of this area. 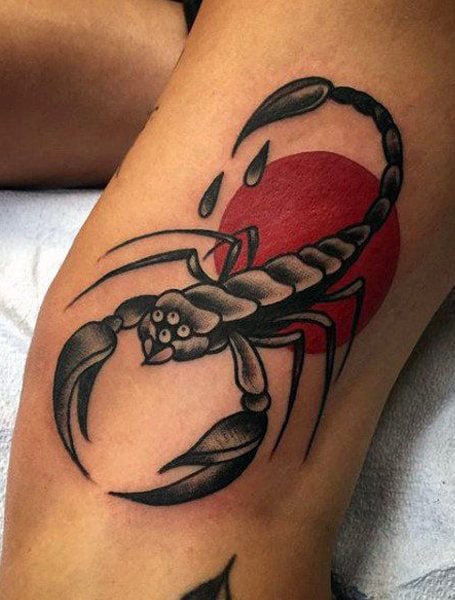 If you’re willing to endure the pain of a foot tattoo, then you will be pleased with the results. A scorpion can work well in this placement, as its tail can head up towards the ankle, creating a striking appearance. That said, the area is one of the most painful body parts to get inked, especially if you’re opting for something that requires a lot of detail and shading. It is also worth noting that it could fade faster than other body parts because when we wear socks and shoes, the design will rub against them. 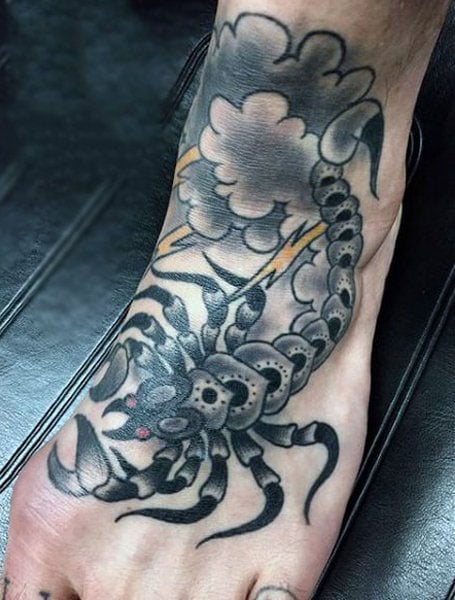 Figuring out the perfect tattoo placement can be a tough task, but the leg is a popular choice for many reasons; it’s large enough that you can create a detailed design, but it’s also not particularly painful. The calf has a fair bit of fat and muscle, with not as many nerve endings; therefore, you won’t experience as much discomfort as you would with, for example, a foot tattoo. The leg is particularly appealing if you want a more detailed piece that requires a fair bit of shading. 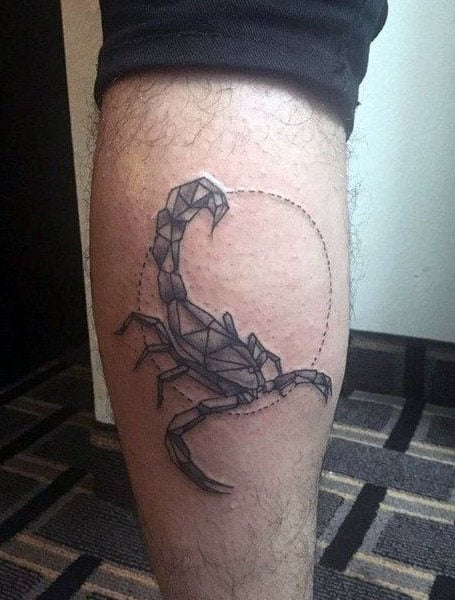 Scorpions are creatures to be feared but also respected, and they have great significance in different cultures. Borneo tattoos have a very distinct appearance, and traditional inking has been done by hand tapping two sticks. The scorpion is locally referred to as the Kala. It is one of the designs that can be found in the emblems of the Iban people. The symbol is more of an abstract portrayal than a realistic one, and it is believed that warriors used to get these pieces inked as a form of protection. 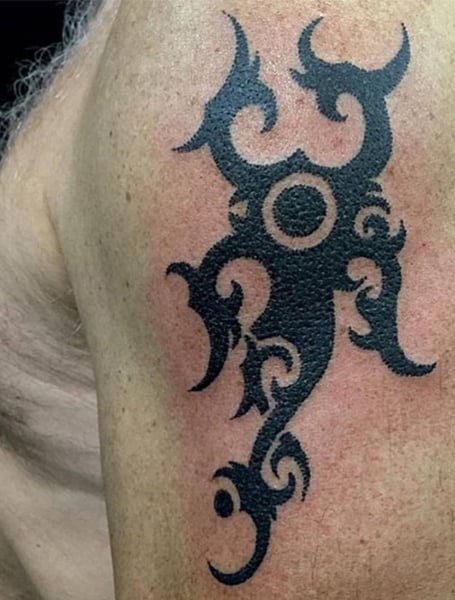 A wrist tattoo suits most people; it’s an area that is small and lends itself well to simple designs. It’s also an excellent spot to show off the ink that is meaningful to you, and you will be able to look at it all the time. You can expect some discomfort while getting inked because of the thin skin and lack of muscle and fat in this location. The area also tends to fade faster than other body parts because of the exposure to the design; we use and wash our hands regularly. 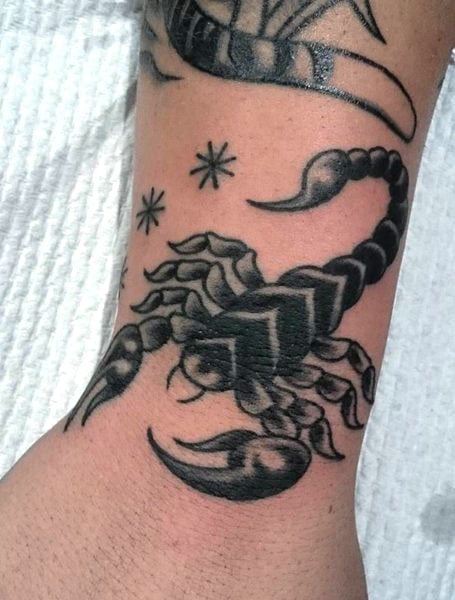 What does a scorpion tattoo mean?

The scorpion tattoo meaning represents intimidation and fear like an expression of great strength, the ability to control and protect oneself, loyalty, and powerful sexuality. The scorpion has the ability to cause death with one wave of its poisonous tail, striking fear into those who get to close.

What are the most popular tattoos for guys?