11 Most Instagrammable Locations in Sicily 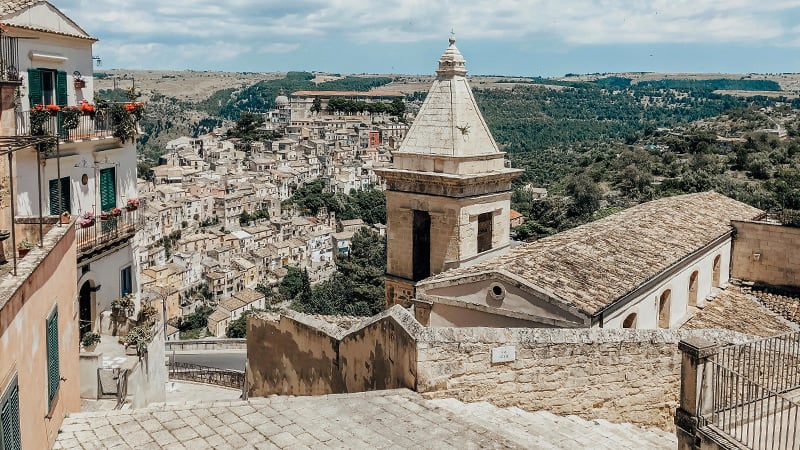 When it comes to breathtaking photo opportunities, Italy tops the list of Instagram-worthy locations. One of the country’s most beautiful regions is the island of Sicily, which lies just off the south coast of Italy. It’s just waiting for you to capture its beauty – think secluded beaches, ancient towns and temples, and unforgettable scenery. Here, untamed wilderness meets a rich culture and a unique multicultural history. You won’t be able to believe your eyes – and your Instagram followers won’t either!

RELATED: 20 Most Instagram-Worthy Locations in Portugal

Located just a 40-minute boat ride from Trapani, Levanzo is a must-visit on your trip to Sicily. Tiny and wild, it’s the smallest of the Egadi island group, off the northwest coast. The incredible turquoise blue waters of its pebbled shores are just begging for an Instagram photo. One of the best shots is from the harbour. From a boat, you can capture not only the azure seas but also the village’s picturesque white houses and rugged cliffs. 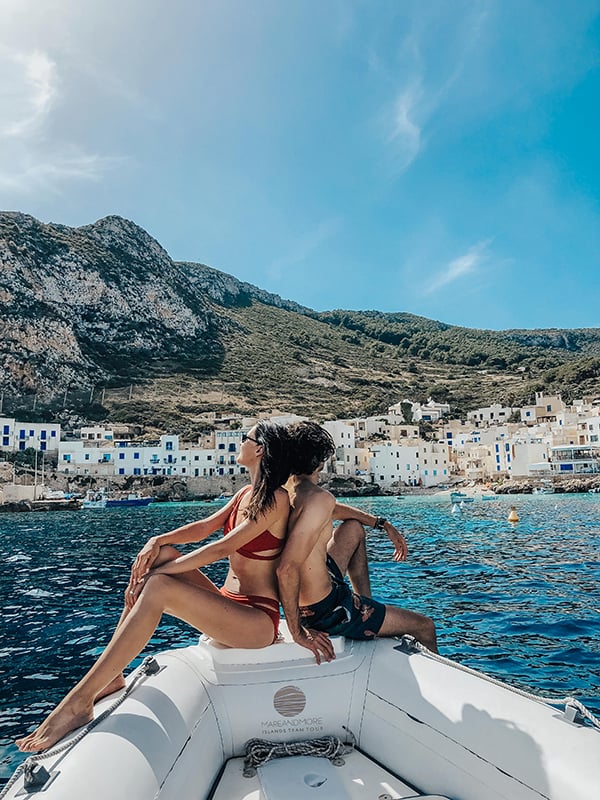 One of Sicily’s most charming cities is Ragusa – it’s all about the view! Ragusa is located on top of a hill, making it perfect for taking shots of the historic town and surrounding valleys. The old town centre, known as Ragusa Ibla, dates back to the 1600s and is surprisingly unspoilt, offering you plenty of Instagram opportunities. Take a selfie as you enjoy a gelato in the historic piazza, or capture the character of the streets. The beauty of the Duomo di San Giorgio cathedral and the Giardino Ibleo gardens will also add a special touch to your feed. 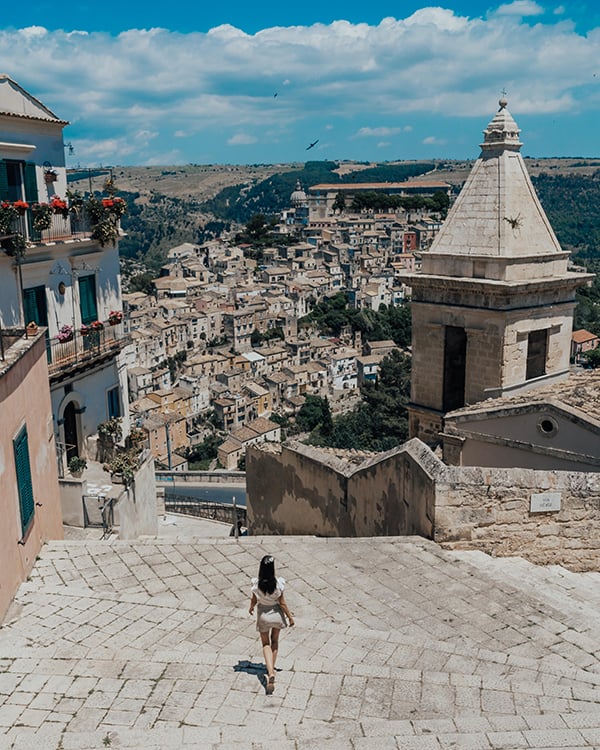 3. Valley of the Temples

You may be in Italy, but Sicily is also home to temples built by the ancient Greeks. The seven monuments located just outside the town of Agrigento are a designated UNESCO World Heritage site and national treasure of Italy. Luckily, their majesty comes through in photos! The seven temples date back to around 400 to 500BCE and will take your breath away – and take your followers on a journey back in time. 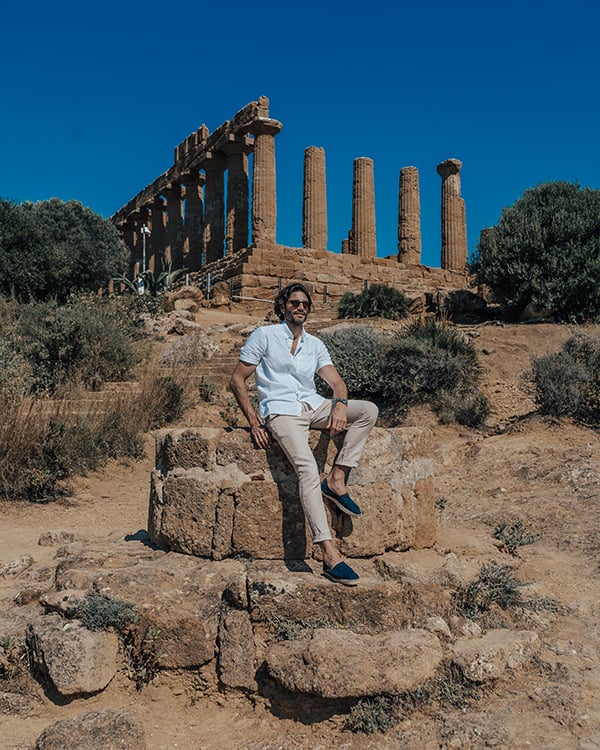 The Scala Dei Turchi is a natural rock formation that rises out of the Mediterranean on Sicily’s south-west coast. It has to be seen to be believed. Worn away by centuries of waves and wind, the pure white cliffs look like steps, hence the name. Locals say that pirates once used the Scala to hide their boats before climbing up to raid the villages. However, you won’t be able to resist climbing them to get the perfect shot! The contrast of the clear blue water with the white rock and sandy beaches will make for your best summer photo ever. 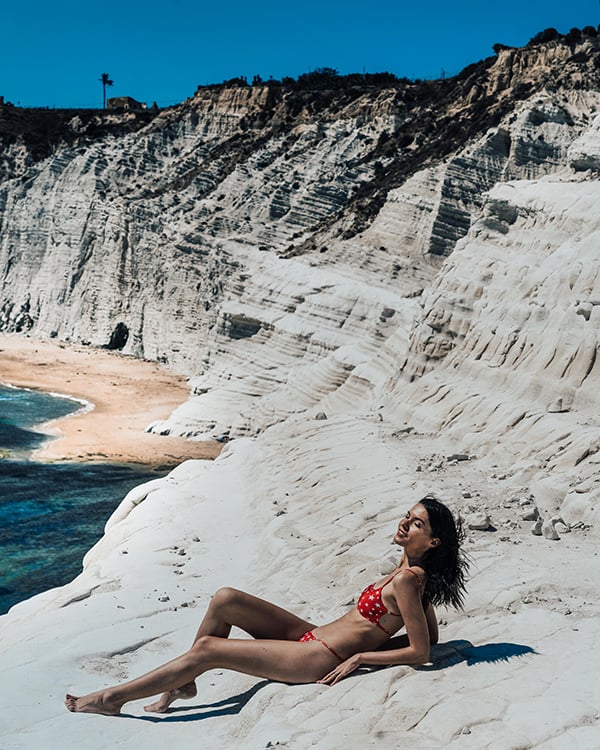 Sicily’s capital city of Palermo boasts many beautiful sites, but the cathedral is one of the best. Dating back to 1185, it had continuous renovations and changes until the 19th Century. It was initially a much smaller church and then a mosque – and as a result, it’s covered in eye-catching architectural features. The grand arched portico by Domenico and Antonello Gagini makes for a dramatic backdrop for an Instagram shot, as do the Renaissance towers and the cathedral’s high dome. 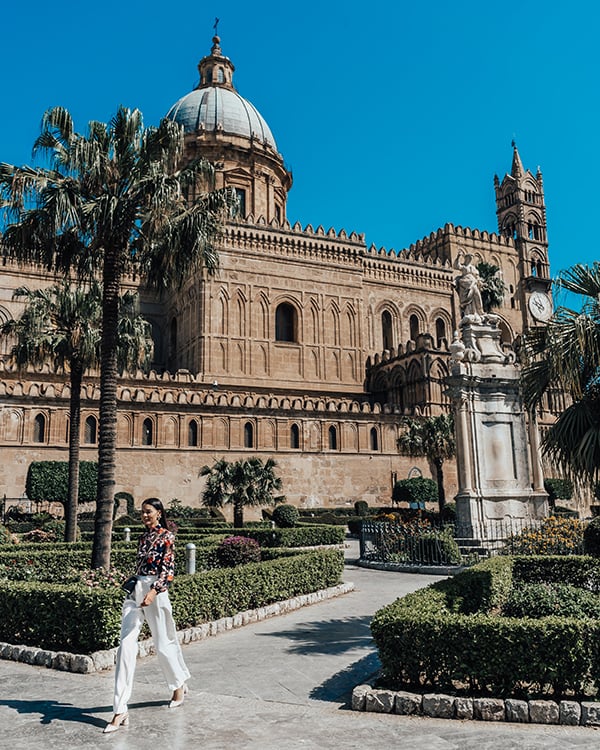 Almost at the exact centre of Palermo is the Piazza Pretoria, which is home to one of Sicily’s most beautiful fountains. Brought to Palermo in 1573, the Fontana Pretoria water feature was originally constructed for a palace in Florence. Its beautiful white statues represent ancient gods, as well as mythological creatures like mermaids and nymphs. But that’s not the only Instagram-worthy feature of the Piazza Pretoria. It’s also bordered by the church of Santa Caterina, the Palazzo Pretorio – a former palace that is now the Mayor of Palermo’s offices – and several other historic palaces. 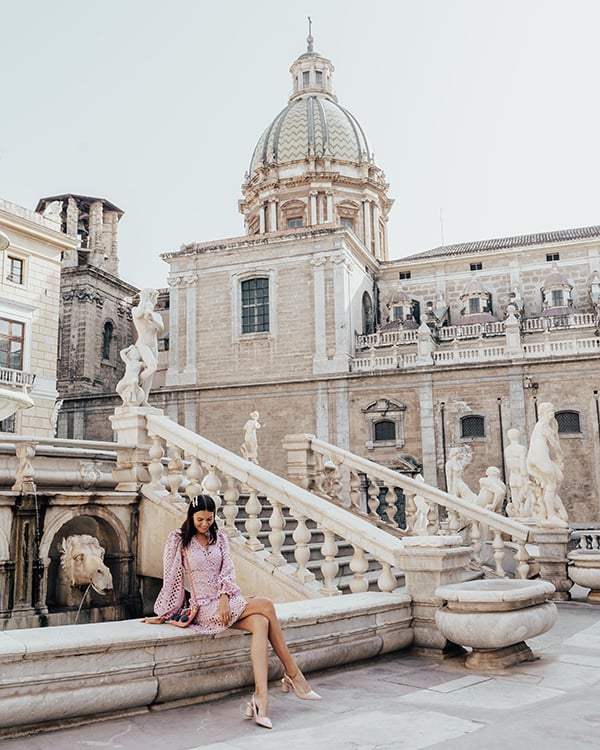 The hidden gem of Tonnara di Scopello is just 45 minutes’ drive from Palermo. Just below the picturesque village of Scopello is this tiny sheltered bay. It was once home to a medieval fishery – tonno means ‘tuna’ in Italian – but is a relaxing holiday spot today. The buildings of the old Tonnara have been converted into apartments which you can book for a short stay. While you’re there, sunbathe on the rocks, admire the incredible rock formations that rise out of the ocean, swim in the ultra-clear water, and take as many photos as you can! 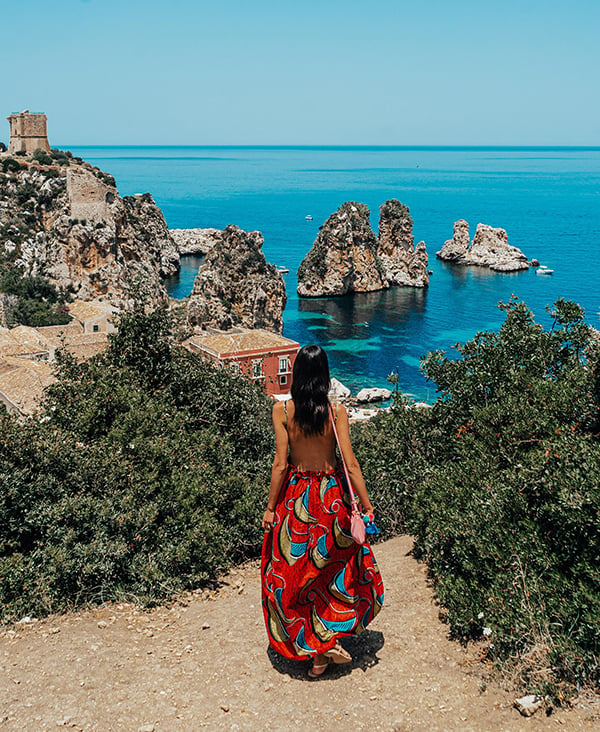 The ancient city of Syracuse, on the southeastern coast, is one of Sicily’s cultural gems. With a rich history dating back to the ancient Greeks, there’s no shortage of photo-worthy spots. The island district of Ortygia, the oldest part of Syracuse, is a must-see. It’s connected to the rest of the city by two bridges and is home to several monuments. One of the best landmarks for Instagram is the Duomo, Syracuse’s cathedral, which was built on the site of the ancient Temple of Athena. Another is the Fountain of Arethusa, a natural freshwater fountain surrounded by plants. However, you won’t be able to resist taking in the rest of the city too! Almost everywhere you turn, you’ll find palazzos, piazzas and the shimmering blue waters of the Ionian Sea ready and waiting for your camera. 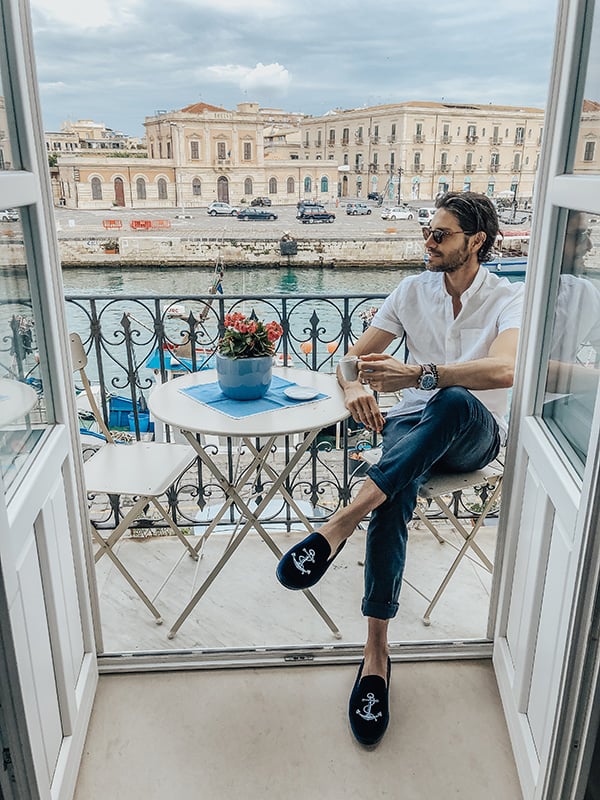 Taormina is one of the most popular – and photogenic – destinations in Sicily. The town sits on the clifftops overlooking both the Bay of Naxos and the Mount Etna volcano. Its public gardens, known as Parco di Giovanni Colonna, are the perfect Instagram location in spring and summer. Meanwhile, the beaches of Giardini Naxos are a short drive away at the bottom of the cliffs. Just off the shoreline is the Isola Bella island. You can walk to this beautiful nature reserve from the beach when the tide is low. Taormina also hosts music, dance, film and theatre festivals throughout the year, making it a great place to visit at any time. 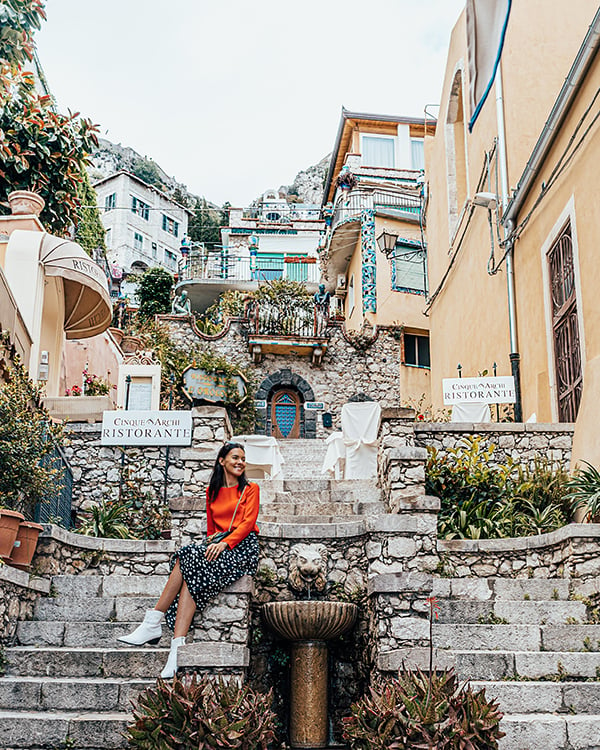 One of the largest Benedictine monasteries in Europe, San Nicolò l’Arena has had a turbulent history. Over the centuries, natural disasters partially destroyed it. As a result, the current monastery combines lots of different architectural styles from its many rebuilding phases. It has now been fully restored and is now part of the University of Catania. This UNESCO World Heritage site boasts cloisters, a roof garden and baroque colonnades. They combine to create the perfect cinematic backdrop to an Instagram photo. 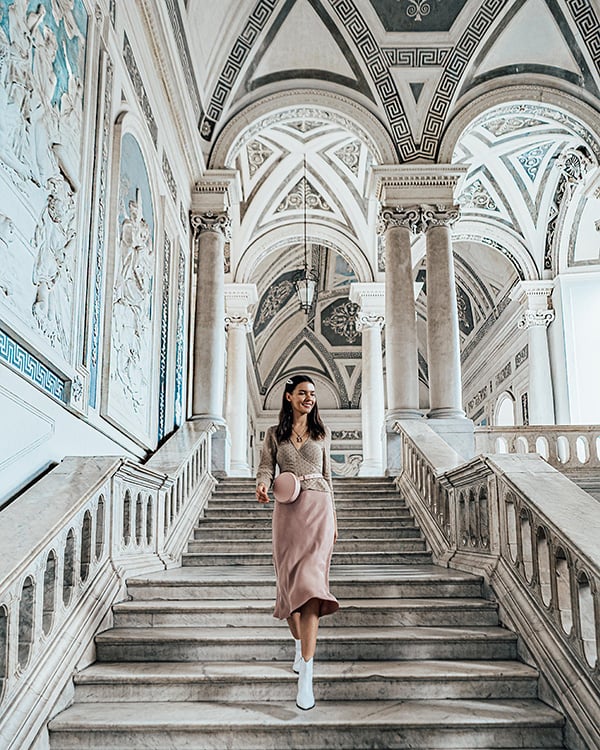 For possibly the best view in Sicily, head to the Castello di Venere. This massive Norman fortress was built on the ruins of an ancient temple to the goddess Venus, at the very top of Mount Erice. Located on the island’s western coast, the castle’s panoramic views are breathtaking. On a clear day, you’ll be able to see out to the horizon and glimpse the Egadi Islands. On the other side of the mountain, there are uninterrupted views over the sun-soaked valleys and rugged coastline. You have to capture the majesty and natural beauty of Erice, as well as the castle itself. 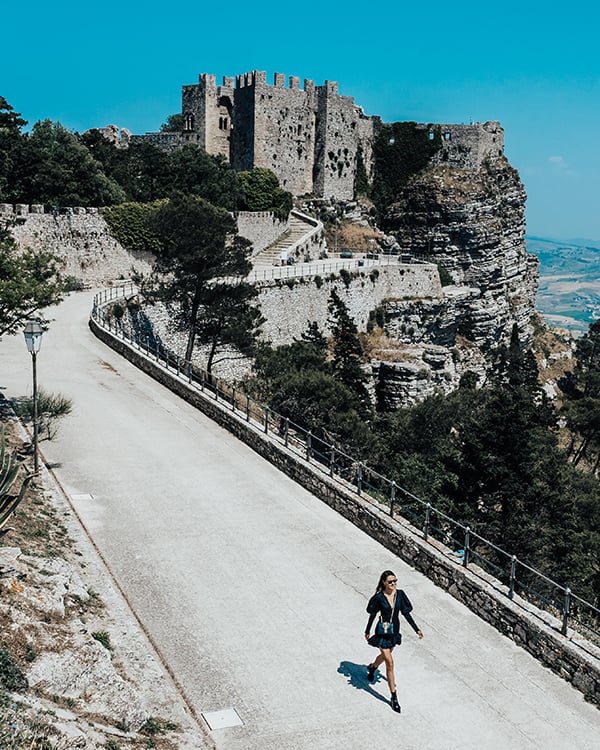