11 Most Instagrammable Locations in Croatia 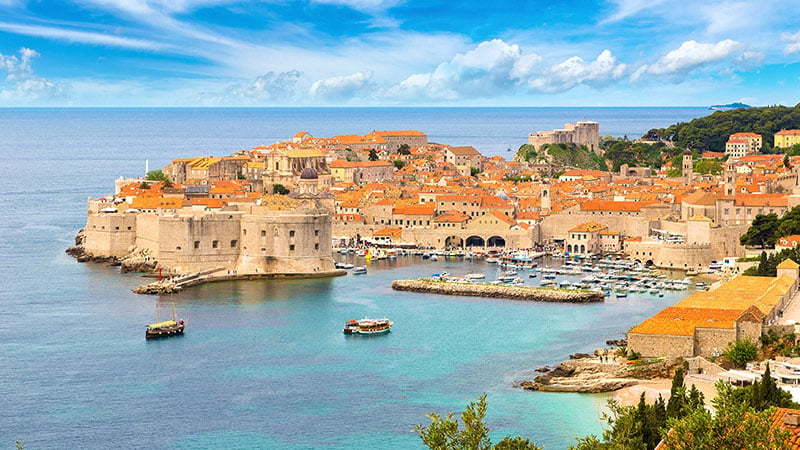 Everywhere you turn, there’s another gorgeous photo waiting to be taken in Croatia. Located just across the Adriatic Sea from Italy and nestled next to Slovenia, the country has been a holiday destination since Roman times. Recently, Croatia has become popular with Game Of Thrones fans who want to check out the scenery of Dubrovnik. Meanwhile, Split’s music festival scene has also drawn thousands of party-lovers to the nation’s shores. So, whether you want to relax on the beach, hike in unspoiled national parks or soak in the atmosphere, there’s something here for you. Your Instagram feed will thank you when you capture it all on camera!

The seaside city of Dubrovnik is one of the most popular destinations in Croatia. It’s become even more exciting since Game Of Thrones filmed here: the city was the backdrop for King’s Landing. With its signature terracotta rooftops, medieval churches and winding streets, the Old Town of Dubrovnik is a must on your Instagram list when you visit. The ancient city walls – dotted with fortresses – enclose the whole of the area. These solid stone defences were built in the 15th Century. They will give you a gorgeous view of Dubrovnik’s beautiful historic buildings as well as the outlook of the Adriatic Sea. The steep climb up is worth it for the stunning shots you can capture! 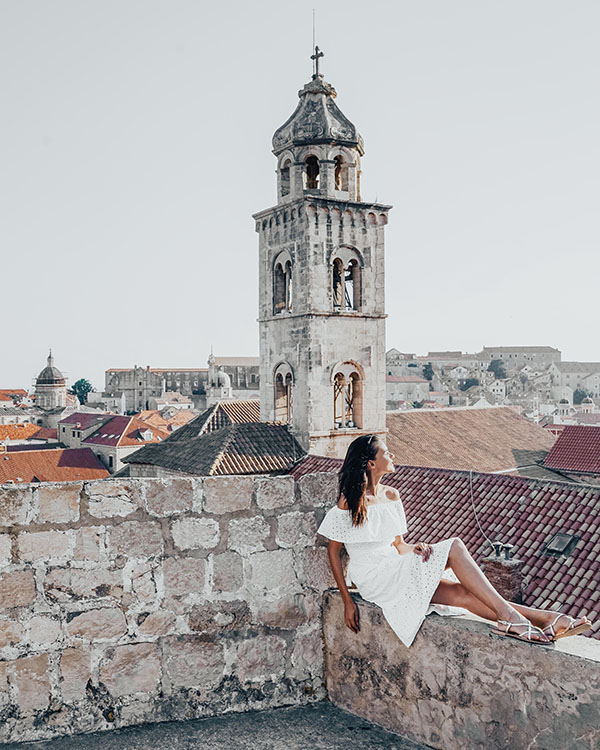 Near Dubrovnik Old Town is the famous Banje Beach. A favourite with the locals as well as visitors of Dubrovnik, it’s an excellent spot for water sports like kayaking, jet skiing and parasailing. It’s also a great place to take photos, as it has a view of the historical city as well as the tree-covered Lokrum Island. You can rent a lounge chair and parasol from the beach club and take in the turquoise blue water with a cocktail in hand. Nothing says ‘summer goals’ more than that! For the best Instagram shot, climb the stairs leading down to Banje Beach. That way you will be able to fit the Old Town, the shoreline and the sea all in one photo. 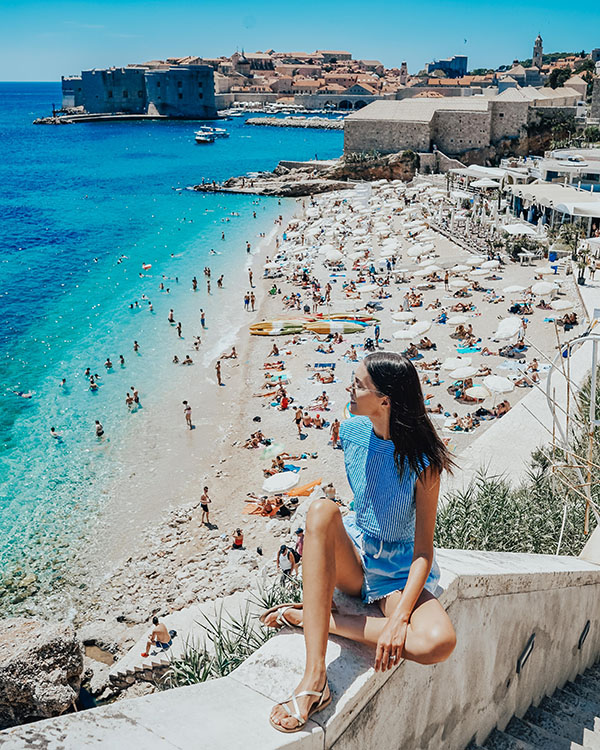 The heart of the city of Split is an ancient Roman ruin that was once the Emperor Diocletian’s palace. The columns, courtyards and stone walls of the complex make up a massive part of Split’s Old Town. Experts consider it one of the best-preserved examples of architecture from Roman times. The Peristyle forms the courtyard of the palace. This paved square, surrounded by ancient temples and Renaissance villas, is the perfect historical backdrop for an Instagram snap. Today, locals use it for socialising and relaxing, and operas and concerts are also held there during the year. Visit it early in the morning to capture the beauty and majesty of the space on camera, then soak in the bustling atmosphere day or night. 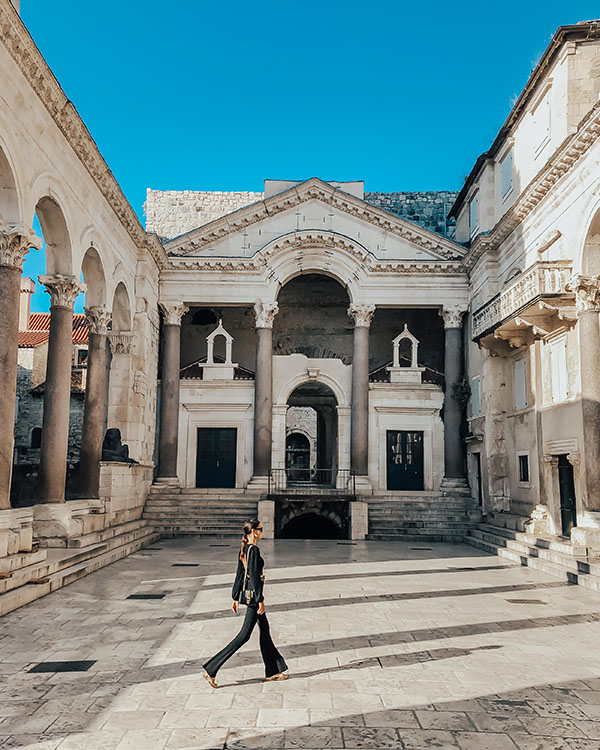 Krka National Park spans from the Adriatic Sea to the mountains of Croatia. The Krka River, which flows through it, gives the park its name. It’s best known for its Skradinski Buk and Roski Slap waterfalls, which look like they could come from a fairy-tale. These natural waterfalls are a must-see on your visit and make the perfect backdrop for a photo. As you explore Krka, there will be plenty of other beautiful sights, so make sure you have your camera ready. Just be sure to arrive by 8:00 am to miss the crowds and have the waterfall to yourself. 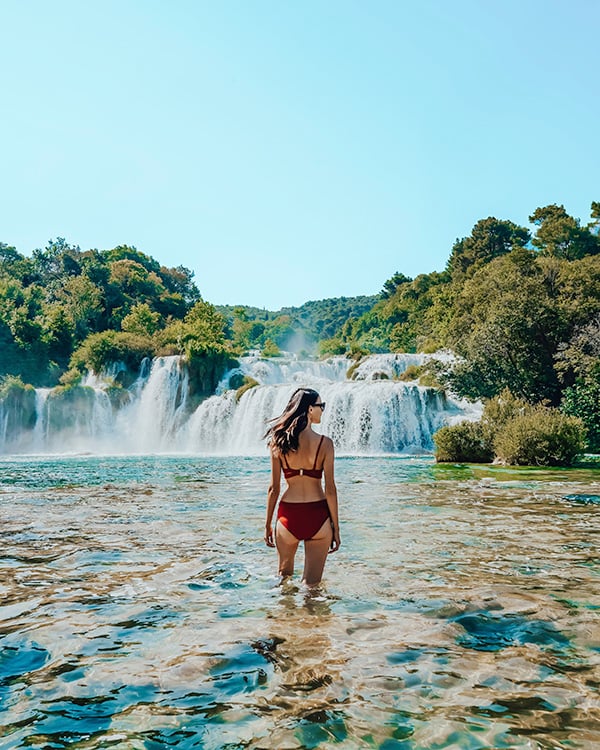 The holiday town of Brela, near Makarska in the south of Croatia, is home to one of the world’s most beautiful beaches. The water of the Adriatic Sea is incredibly bright, clear and blue. Brela Beach – also known as Punta Rata – is popular amongst locals and visitors. Native pine trees, sand and rock formations ring the shore. The unspoiled natural scenery makes it perfect for a photo opportunity; the contrast between the sea, rocks and trees is stunning. In particular, the Kamen Brela (the Brela Stone), a tiny tree-covered island just off the beach, is one of the most popular landmarks to snap and is a must for your Instagram. Brela is also known for its romantic sunsets. So, if you have the chance, stay the night and capture the magic on camera. 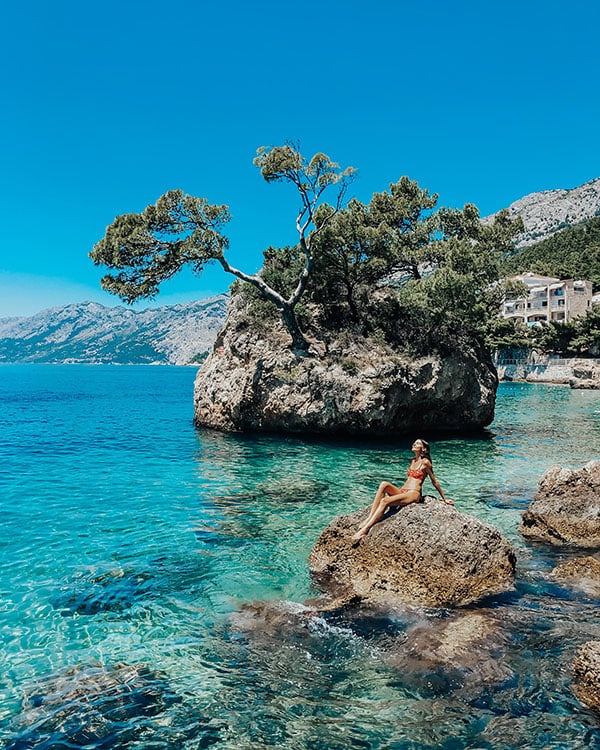 The oldest and largest national park in Croatia is Plitvice. A UNESCO World Heritage site, many consider it one of the most beautiful places in the world. It’s about two hours’ drive from the capital city, Zagreb, in the centre of Croatia. The park is a huge forest full of lakes and waterfalls, which you can explore on wooden boardwalks that wind around the park. The Veliki Slap – the Big Waterfall – is a must-visit for photos. However, inside Plitvice, anywhere you go, you’ll find photogenic scenery that your Instagram followers will love. The national park is also home to animals like deer, bears, wolves, wild boar and rare birds, so nature lovers won’t want to miss it. 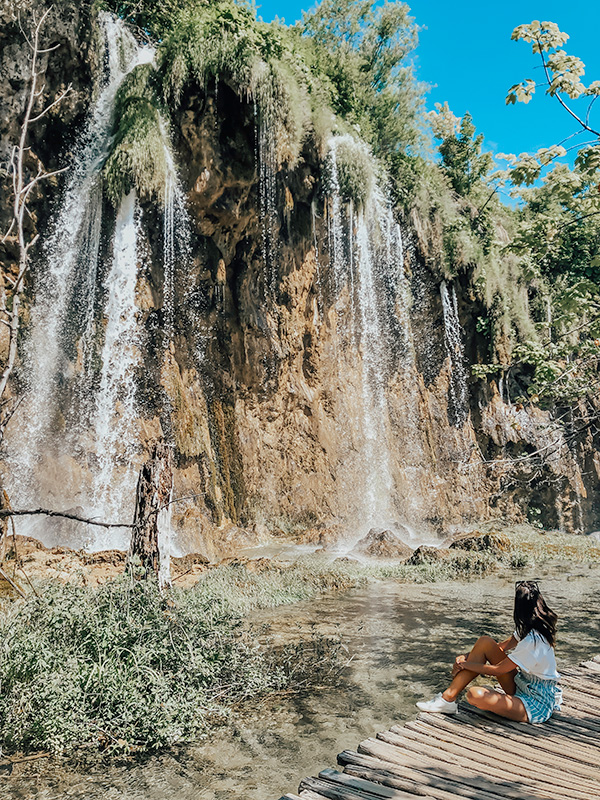 The exclusive and secluded Carpe Diem Beach is home to one of Croatia’s most famous beach bars. While it is just 10 minutes by speedboat from the resort island of Hvar, you’ll be a thousand miles away from care when you step onto the shore. The beach’s natural beauty is Instagram goals, and it’s perfect for swimming and sunbathing. At the nearby beach club, relax in style as you enjoy chill music, cocktails and delicious food as the sun goes down. Then, by night, get ready to party and dance under the stars with world-class DJs and an unbeatable vibe. Carpe Diem Beach is not just for making your Instagram pop – it’s also for creating unforgettable memories. 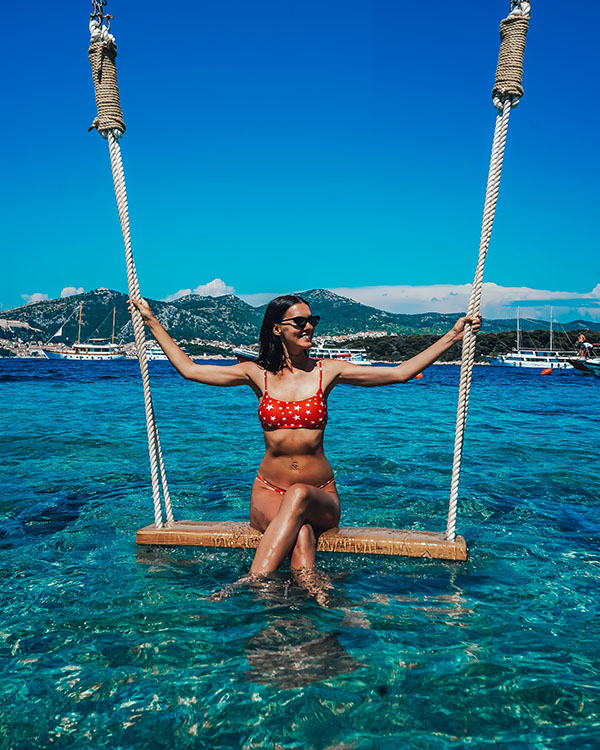 The capital of Croatia, Zagreb, is a beautiful and historic city dating back centuries. You’ll find famous architect Hermann Bollé’s work throughout the city – and particularly in the Mirogoj Cemetery. A graveyard might seem like an unconventional choice for Instagram, but Mirogoj is a peaceful, tranquil and beautiful place that’s famous for its arches, sculptures and ivy-covered buildings. There are also lavish domed monuments dotted around with pastel interiors. They are a favourite with photographers in summer. In winter, you can photograph the cemetery as candles and flowers cover the ground on All Souls’ Day – November 2. This makes for a poetic and moving shot. 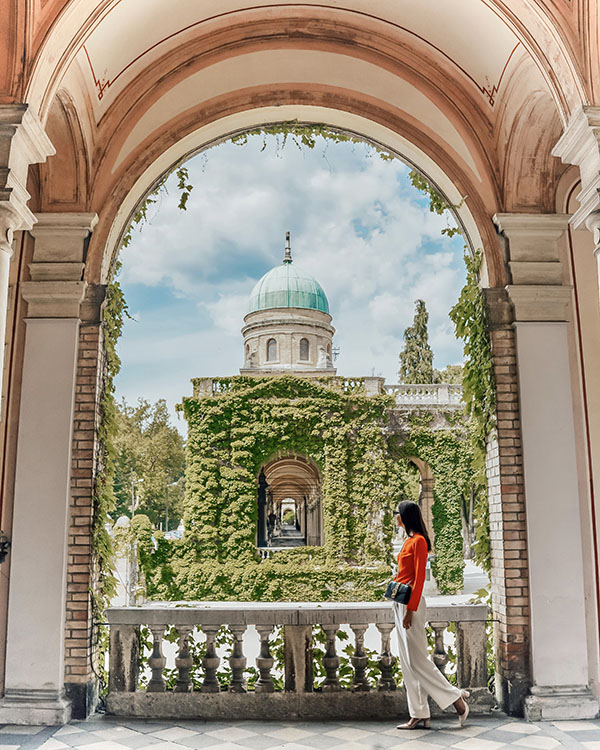 The Slunj region, located in the central mountains, is one of the most picturesque parts of Croatia, despite being less than two hours from bustling Zagreb. Its towns are famous for their waterfalls and rapids, as they lie on the Slunjčica River. Rastoke is one of the best examples of Slunj’s traditional villages, which makes it the perfect place to capture the magic of the area. Rastoke means ‘branching rivers’, and it’s easy to see how the town earned the title. Its wooden houses and bridges span across the water of both the Slunjčica and Korana Rivers, forming more than 23 waterfalls as well as streams and brooks. Peaceful and secluded, Rastoke still has a rustic, untouched charm that will come through in your photos. 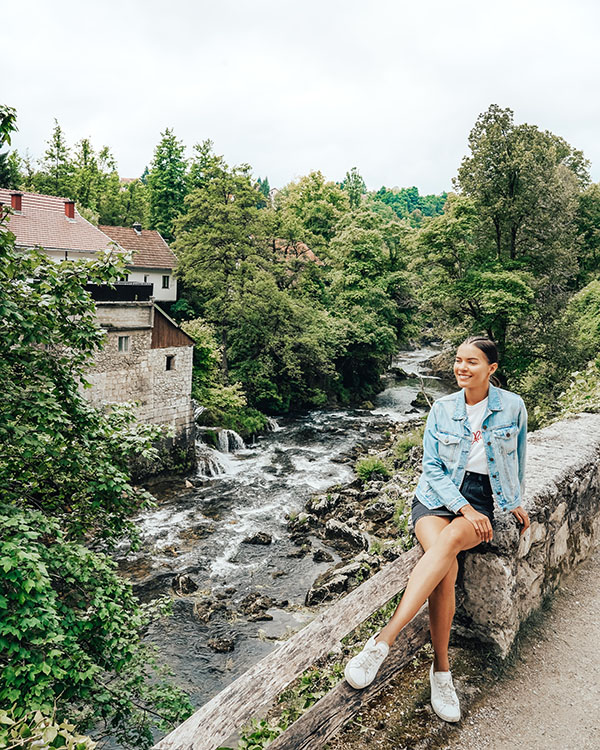 Without a doubt, one of the most iconic buildings in Zagreb is St Mark’s Church, in the city’s Old Town. That’s because of its striking roof, which is made up of colourful tiles that form to create two giant designs. On one side is the medieval coat of arms of Croatia and on the other is the emblem of Zagreb – a white castle on a red background. You can see the full effect of the design from the square in front of the church. That is because the roof slopes down at an angle, which also means you can take an eye-catching photo in front of it! The rest of the church is beautiful too, with parts of it dating back nearly 800 years, making it one of the oldest buildings in Zagreb. 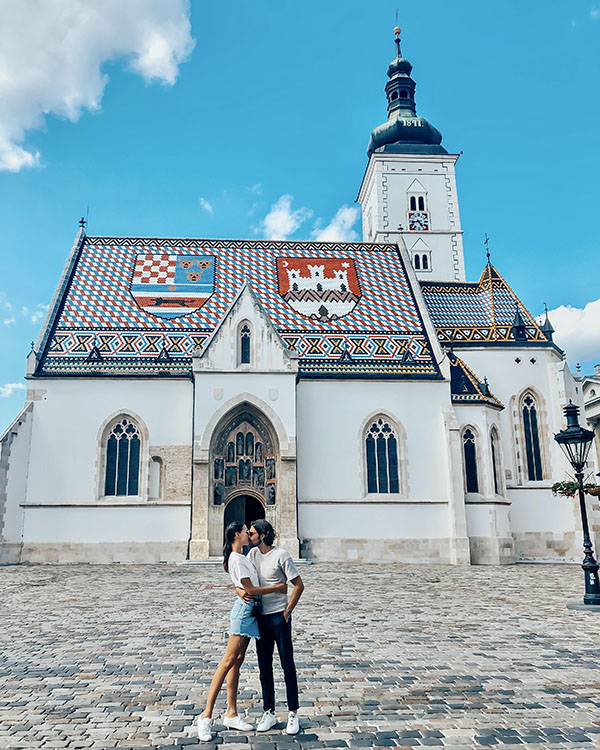 Zagreb Cathedral is the tallest building in Croatia, and its majestic twin spires are visible from all over the city. The architecture of the cathedral takes you on a journey through time, as there have been many attempts to rebuild it after natural disasters and invasions. Some of its frescoes date back 800 years. The spires are still being restored today, based on the designs of the famous 19th Century architect Hermann Bollé who also designed the Mirogoj Cemetery. Outside, you’ll be able to take stunning photos that show off the cathedral’s Gothic Revival aesthetic. With this majestic building in the background, you’ll give your Instagram feed a sense of history that’s uniquely Zagreb. 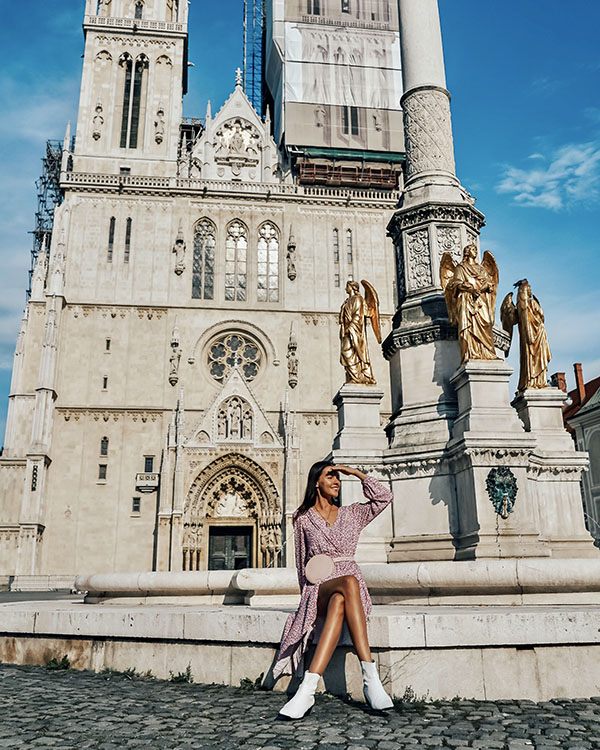