The Ultimate Guide to Truffles 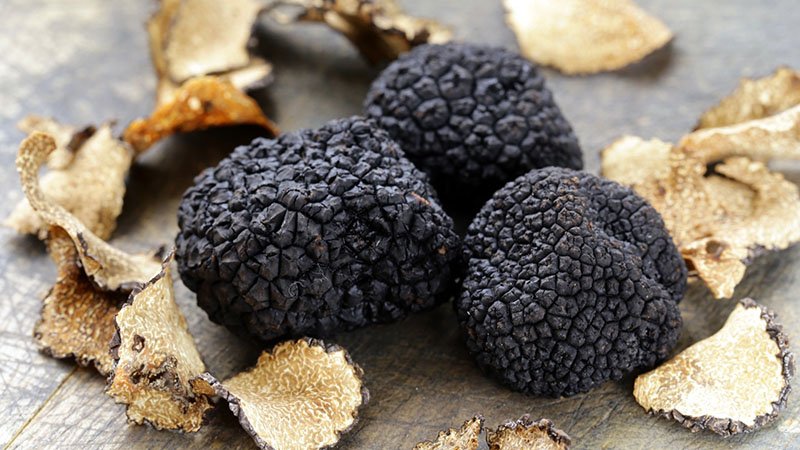 In the incredible and fast-paced world of fine dining, there are a few delicacies that last the test of time. Best known as culinary gold, this fungus is highly coveted, aromatic, tasty, and mighty expensive. Why is this chef-adored ingredient so sought-after, how rare are they, and why do they cost so much money? Let us take you through our ultimate guide to truffles and see why they garner so much hype in the cuisine scene.

Truffles are the fruiting body of an ascomycete fungus – they grow underground and are typically hard to find. There are over 200 species that exist, but the most popular options include black and white. You can typically find them across France, Italy, and Spain. To grow them, they have to mature in a specific type of soil at the right temperature. They’re also very expensive. While it’s almost impossible to describe the taste of this food, the reviews are often polarising. They’re often noted as aromatic, earthy, sweet, and musky, and the scent and taste can be overpowering in some cases, so small amounts are added to dishes. Truffles add flavor and enhance the aroma of a meal, such as pasta, sauces, mashed potato, and risotto. 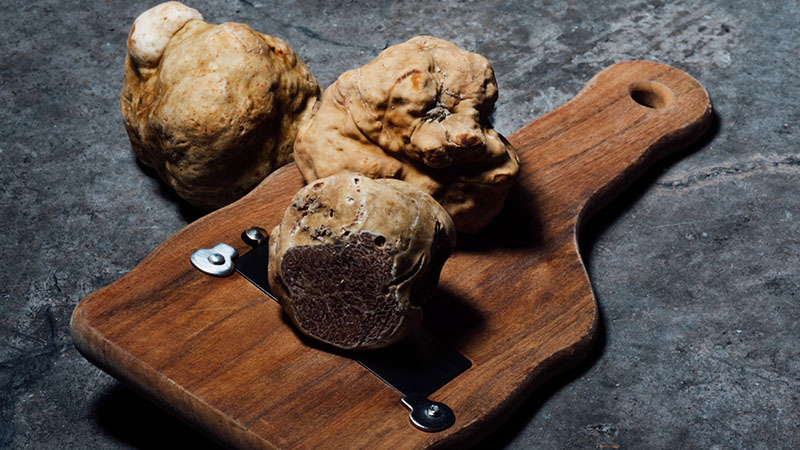 While truffles are a part of the fungi family, they are not necessarily mushrooms – essentially, they’re cousins. Both of these species classify as eukaryotic organisms, meaning they have similar qualities but are not the same thing as each other. There are a few key differences in the way they are grown and how you eat them. Unlike a mushroom, a truffle best grows near the roots of a beech, hazel, or oak tree.

Cultivators will only find them underground, and they’re scarce. In contrast, mushrooms will only grow above the ground, can be found almost anywhere, and easily cultivated. Additionally, you can cook, fry, or even eat them raw – they can be added to almost any meal for texture, aroma, and flavor. However, you won’t want to cook a truffle as they can lose their characteristics almost instantly. Instead, shave a few thin slices to the top of your favorite savory dish. 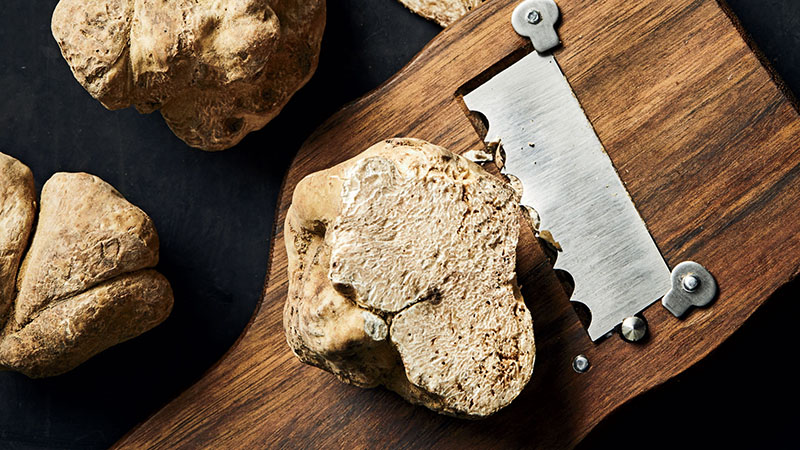 Truffles are quite distinctive in their aesthetic, but they are still hard to find. The two most popular choices include white and black – they can be found in Europe and have appeared in parts of Australia and the US. Its characteristics depend on the type you are looking at and trying. The black truffle, also the Périgord, are typically dark and matte with small raised cusps and reach a size of 10 cm. When you cut it open, you’ll find a flurry of small white veins inside that turn brown with age. These are often cheaper than white counterparts but are still aromatic and add plenty of flavor to a dish. The most coveted and expensive truffle, known as Alba or Piedmont, can reach up to 12cm and have slightly yellow and smooth skin. They could even resemble a potato and often have the most pungent flavors and aroma. 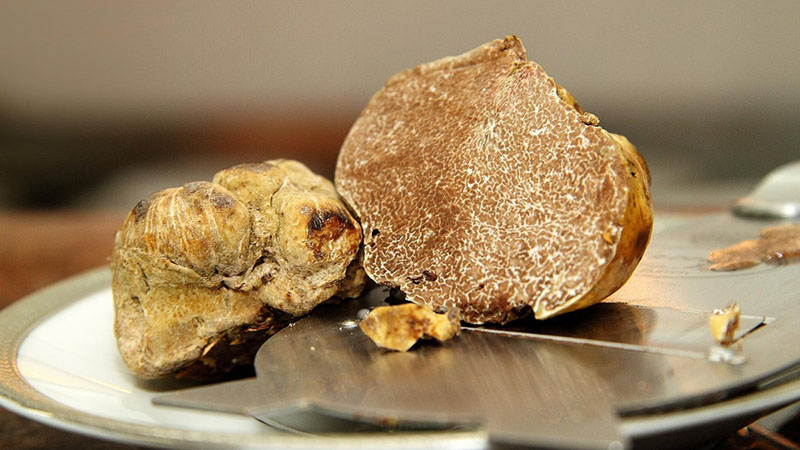 How are Truffles Grown?

While you can try and grow truffles anywhere, it’s important to know that they can’t be tamed and are very high maintenance. These have been delicacies among food lovers for centuries, and people have developed a fine-tuned way to grow them effectively. Unlike mushrooms, truffles must grow underground and require the roots of a hazel, beech, or oak tree. As they’re ectomycorrhiza fungi, they mutually benefit from the roots under the surface. Because they suppress other roots around them, it’s important that no other plants or vegetation is nearby. It’s notoriously difficult to try and cultivate them, as they require the right degree of alkaline, specific temperatures, and a lot of patience. 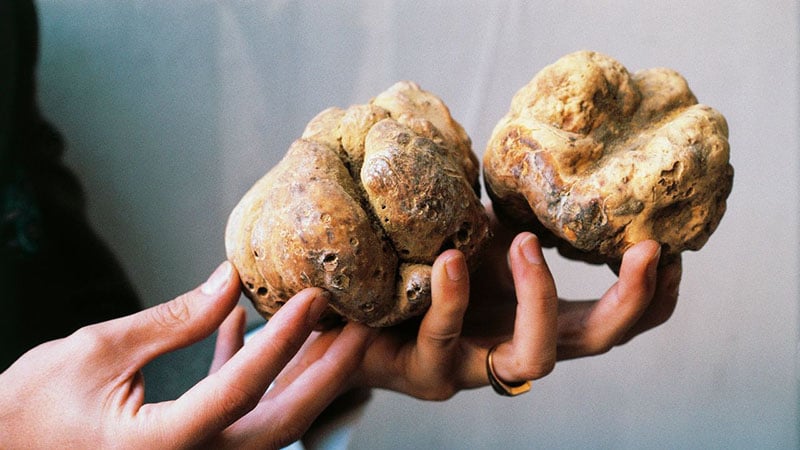 How are Truffles Harvested?

There are specific times of the year the culinary gold is available to find. The season for Black Truffles typically starts in November and runs until April, whereas the White Truffle begins to harvest from September to the New Year. Truffles can’t just be handpicked; they need a dog or pig to help sniff them out. Centuries ago, it’s safe to assume that wild boars would be used, but pigs replaced them by the 17th century. Since then, certain dogs have been trained and can effectively find the scent of the fungi. Labradors, spaniels, Britons, and the Italian Lagotto are the most common breeds used – they must understand what the food feels and smell like and locate them under any terrain. You’ll know the food is ready when the plants around it have started to die back. When we say you have to be patient when growing them, we mean it can sometimes take up to a decade for them to fully mature. 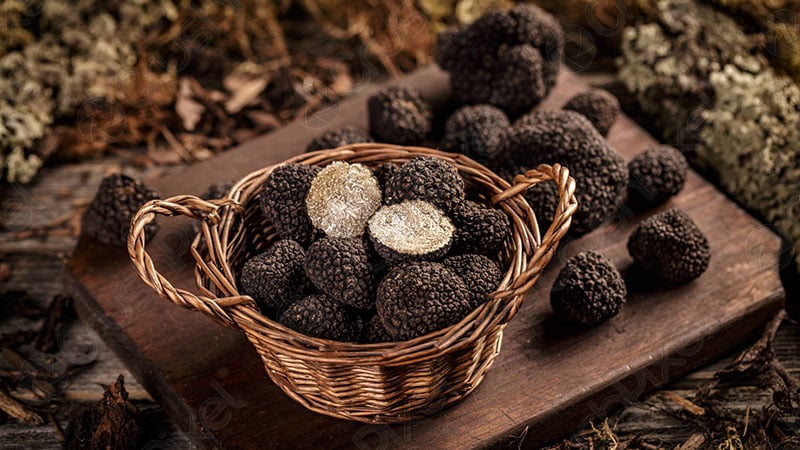 While they’re quite different, black and mushrooms actually share a few characteristics. To start with, they’re both Tuber species and grow in similar habitats across parts of Europe. Similarly, they share pungent aromas, enhance the flavor of savory dishes, and taste great with pasta! They’re also very expensive and are a delicacy in the culinary scene. While these two share similar qualities, they’re quite different from truffle oil. In fact, the latter may not be everything you think it is. While some are developed using the residue of the ingredient, most of it isn’t even made from truffle at all, but a chemical that mimics the aroma of the fungi – synthetic 2,4-dithiapentane, to be specific.& 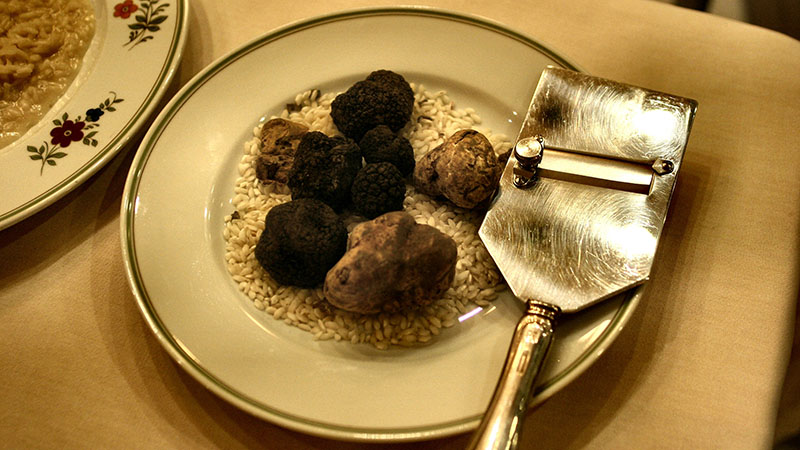 How Much Does a Truffle Cost?

You can expect to pay a pretty penny to get your hands on truffles. Typically, lovers of the fungi will pay anywhere from $150 to $300 for a few hundred grams. This is an expensive delicacy, but that’s because of its rarity and prized reputation across the cuisine scene. If you want to try out the aromatic ingredient yourself but can’t justify the cost, an alternative to consider is the Summer Truffle, which are markedly cheaper but lacks the same overwhelming taste. 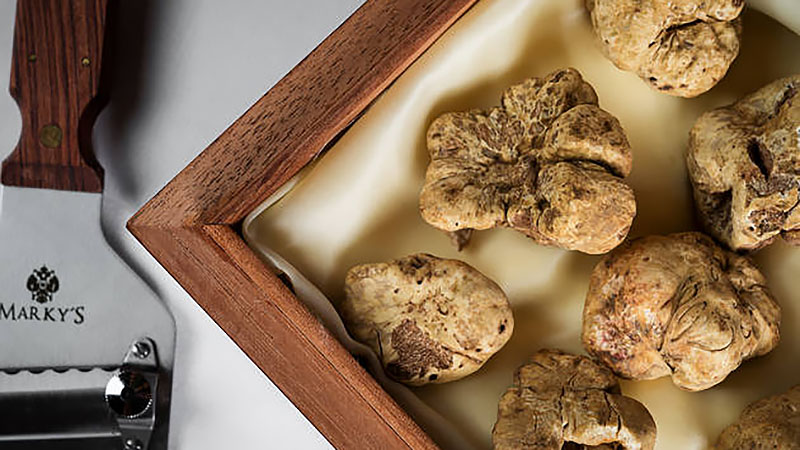 Where Can You Buy Truffles?

Truffles can be found almost anywhere that offers gourmet food, even online. Depending on your location, you can find a truffle grower and purchase directly from them or find a stockist that sells fresh fungi during winter. You can get your hands on some incredible fungi from truffle-specific harvests across the globe. Notably, the French village Richerenches hosts events every Saturday from November to March 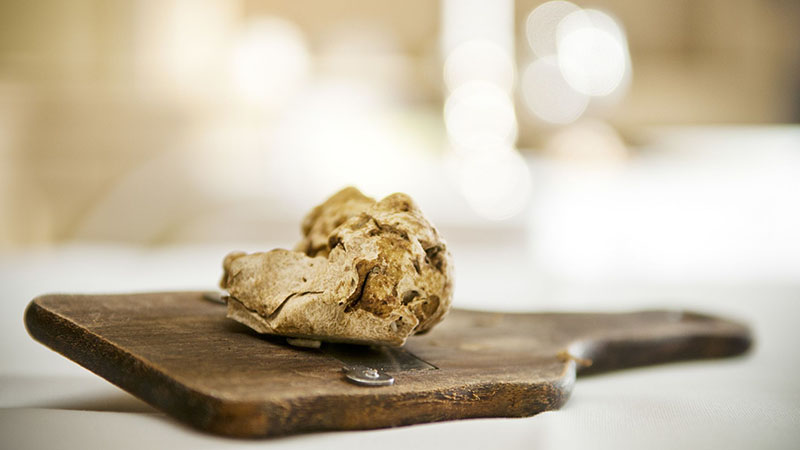 How to Store Truffles

Because they thrive in winter, truffles are best stored in cold environments. After you take them home, wrap each piece in a paper towel, place them in a glass jar and keep them locked in the fridge. If they get wet, they can lose their aroma and taste, so they must stay in an airtight container to retain the scent and freshness. 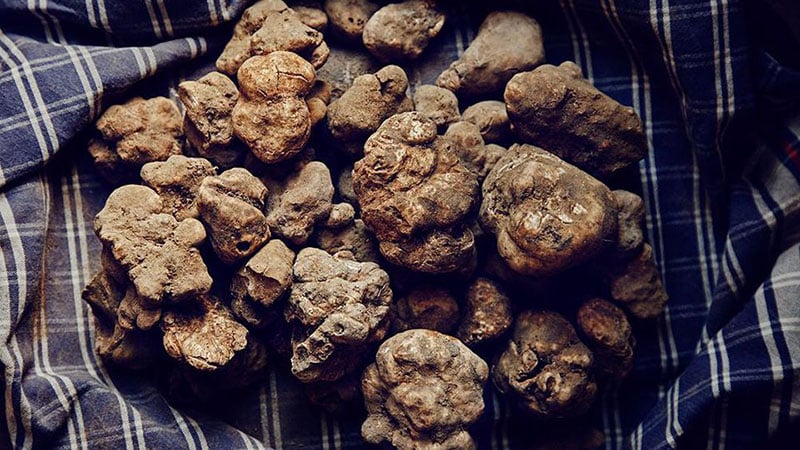 How to Cook with Truffles

This is a versatile ingredient and can be added to almost any savory dish to enhance its flavor. Typically, you can find the fungi shaved in thin slices over a dish before serving – this is common with White Truffles due to their rarity and fragrance. Alternatively, the tougher types of truffles, such as Black, can be simmered with a sauce. They taste incredible with pizza, pasta, mashed potato, or even sauce, butter, or oil. 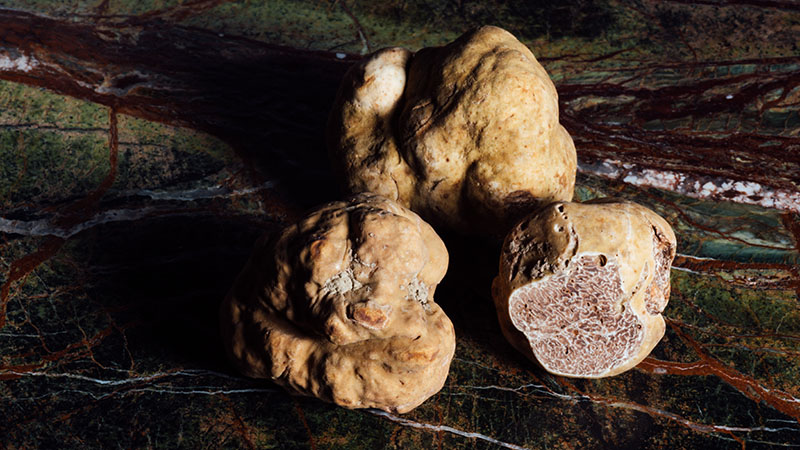 The Best Wines to Pair with Truffles

It can be a bit tricky trying to match a wine with such a delicacy as truffles. Blends that have aged for some time will easily pair well with the fungi, especially if they have an aromatic undertone. When considering a wine, it’s important to consider the flavor you wish to highlight. As truffles can be quite overpowering, you should avoid choosing anything light or fruity, like a Pinot Grigio. Complement the aroma of the ingredient with something smokey and earthy, like a Bordeaux or Barolo. 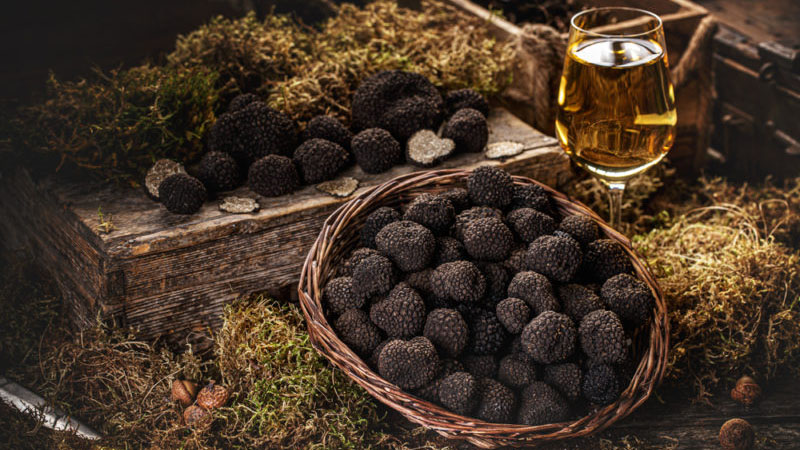 Why is truffle so expensive?

Truffles are so expensive because they take a long time to cultivate and grow. They also require specific elements to grow, including the type of soil and temperature. As truffles grow underground, farmers require a dog or pig to sniff them out, and they can take up to ten years to fully mature.

Truffles have a taste that may not be to everyone's standards. Typically, they're considered quite earthy and earth-like, but the aroma is sweet and musky. The taste is robust and adds depth to many meals. Truffles are considered delicacies in the cuisine scene, but you only need a small amount of the fungi to be effective.

Is a truffle a vegetable?

A truffle is a part of the fungi family, which is not related to vegetables. While they grow under the ground like typical vegetables and can be eaten by people, they are special members of the fungus kingdom and are more closely related to mushrooms.

How Big is the Truffle Industry?

Truffles have been grown for hundreds of years, and the truffle industry has grown alongside them. The most popular posts for farmers are in France, Spain, and Italy - this is due to the specific requirements needed to create a strong harvest. However, there are now farms growing in Australia, New Zealand, and the United States.

What’s the biggest truffle ever found?

The largest truffle on record Is the Tuber magnatum pico, which weighed in at 4.6 pounds or 1.78 kilograms. It was found in Italy and sold by Sabatino Tartufi at Sotheby's NY Auction House for $61,250 in 2014. A typical truffle can grow up to 10-12 cm in size to put this in perspective.

Where to Buy the Best Fresh Truffles

The best place to buy truffles is directly from the farmer, but we understand that's not always possible. To find fresh and delicious truffles, you will have to journey to a market or harvest festival. Alternatively, you can seek out the fresh fungi in gourmet grocers or online - just make sure they're transported and stored correctly to secure the scent.

Is Truffle Oil made from Truffles?

No. Truffle oil is typically made from a synthetic chemical that smells and tastes like the real thing. The name of the chemical is synthetic 2,4-dithiapentane and is lab-made. However, in some cases, fragments and residue of real truffles can be used while preparing the oil, but it's not common.