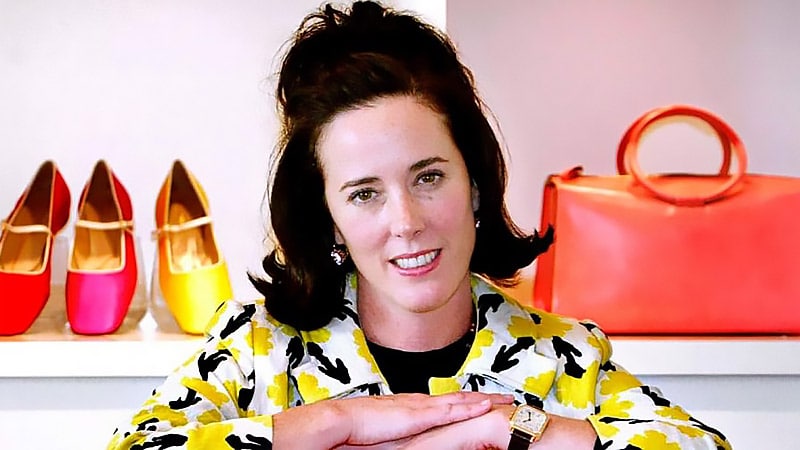 This week in fashion, Kate Spade was tragically found dead at 55, celebrities frocked up for the CFDA Awards, and Harry Styles is spotted with a new chick for his latest Gucci campaign. Find these stories and more as we reveal this week’s top international fashion news.

The world of fashion is in mourning after the tragic loss of Kate Spade. The designer built her fashion empire with her signature line of bags and reportedly took her own life at 55 years old. She was discovered by her housekeeper in her New York City apartment on Tuesday the 5th of June. Kate launched her namesake fashion line in 1993 along with her husband, Andy Spade. The handbag line quickly sored to success eventually including clothing, jewellery, bedding, legwear and fragrances. The couple sold the line in 2006 and launched Frances Valentine, selling footwear and accessories. Kate became synonymous with bright, elegant designs and making high-end items accessible for everyone.

Kate’s brother, Earl Brosnahan, released a statement on Thursday which read; “We are grateful for the incredible outpouring of love and support the family has received over the last few days,” he said. “We should all remember the beauty and joy that Kate brought to this world.”He continued: “But it is sad and very hurtful, given the pain the family is enduring, that people with no real knowledge of the situation are leaking false, speculative information that maligns Kate’s character and belittles the health issues she bravely fought. We once again ask that the family’s privacy be respected during this challenging time.”

The CFDA Awards Went Down

Celebrities flocked to the Brooklyn Museum on Monday night to celebrate the American fashion industry’s night of nights. Hosted by Issa Rae, the 2018 Council of Fashion Designers of America Awards, honouring the best and brightest people in fashion design. The eco-friendly red carpet made from recycled materials hosted some of the biggest celebrities and hottest emerging and renowned fashion designers in the world.

Kim Kardashian took out the first ever influencer award, joking during her speech “I’m kind of shocked I’m winning a fashion award when I’m naked most of the time. But this is seriously such an honour.” Womenswear Designer of the Year went to Calvin Klein’s Raf Simons, while street style kings, Supreme scored the menswear award. Ashley and Mary-Kate Olsen scored Accessory Designer of the Year for their label, The Row. Diane von Furstenberg received an award for creating positive change while the Fashion Icon award went to Naomi Campbell.

Our 2018 #CFDAAwards winners are all smiles, Trova in hand, backstage at the @swarovski Winner's Walk ?: @lewismirrett

Harry Styles has a new bird. The singer is pictured rocking a Gucci suit while holding a chicken for Gucci’s latest campaign. While Styles and Gucci have a penchant for the strange, it is actually for a great purpose. The luxury label announced that in support of World Environment Day on June 5th, they are launching Gucci Equilibrium. It is an online platform to “connect people, planet and purpose” in an effort to continue to progress in the field of sustainable fashion.

The initiative is part of the Italian Fashion House’s ten-year plan towards reducing its environmental impact. Over this time, Gucci will gradually integrate sustainable strategy throughout all aspects and avenues of the brand. In an official statement, Gucci CEO Marco Bizzarri said, “Gucci is not a company where you must leave your values at the door, but one where they are enhanced, challenged and amplified. Gucci Equilibrium is about us spreading that energy and that positive intent to everyone who loves our brand.” Equilibrium covers a range of issues, such as Gucci’s overall environmental performance, use of sustainable raw materials, stance on fur, packaging and more. You’ll also find links to the brand’s corporate sustainability and responsibility and other important documents.

Miss America has announced that it will ditch the swimwear section of its competitions. The change follows an overhaul of the entire organisation, which has seen three women promoted to top leadership positions. Live interactive sessions with the judges will replace the bikini component. The move comes as the pageant strives to shift its focus from looks and body image towards personality and intellect.

Miss America Organisation chairwoman Gretchen Carlson told Good Morning America, “We are not going to judge you on your outward appearance.” She added, “We want more women to know that they are welcome in this organisation.” In a bid to attract more diverse contestants, the pageant will now be known as a competition. Ms Carlson said, “We want more young women to see this program as a platform upon which they can advance their desire to make a real difference and to provide them with the necessary skills and resources for them to succeed in any career path they choose.”

Converse and Miley Cyrus Collaborate for a Pride Month Collection

June is Pride month and to celebrate Queen Miley has teamed up with Converse for a rainbow collaboration. Converse releases a pride collection every year, however, this line, designed by Miley Cyrus will debut four new styles.

The Chuck Taylor All Star Platform High gets a prideful upgrade in the form of a six-layer rainbow sole. Other converse signature styles like the Chuck Taylor All Star High, Chuck Taylor All Star Low and Chuck 70 also boast colourful stripes and polka dots. Converse will donate a portion of the proceeds to LGBTQ+ youth partners all over the globe. Charities include the It Gets Better Project, Minus18, RainbowYOUTH, and Miley’s own Happy Hippie Foundation. There is also a pullover, trackies, T-shirts and hats, with polka dots and rainbows to match your fab new sneakers.