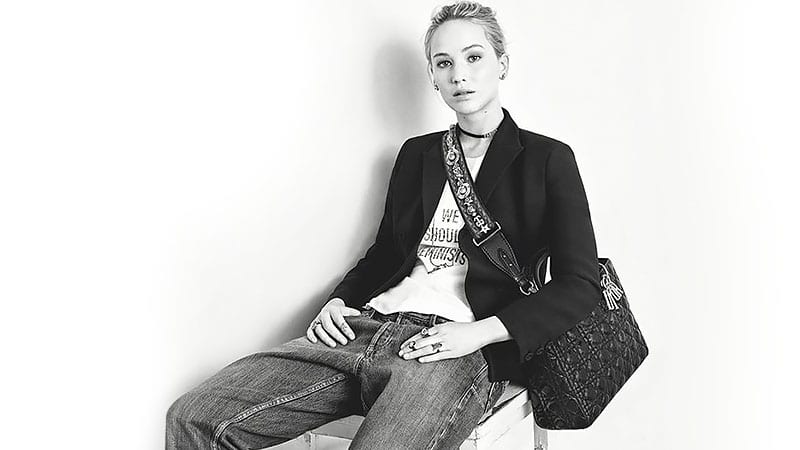 From DNA origin tracking on emeralds to parties in Phillip Plein’s private jet themed bar, these are the top international fashion news stories of the week.

Champion tennis player, René Lacoste, was renowned for his performance on the court and his inventions of the first tennis-ball machine and the steel tennis racket. Add an internationally acclaimed fashion brand with a little crocodile logo and Lacoste became an empire. Since its inception in 1933, Lacoste has revolutionised the bond between the sporting and fashion worlds. This week, it took a stride back to its roots with a new tennis inspired capsule collection that saw the brand collaborate with the avant-garde Yazbukey.

Famous Parisian boutique Colette was honoured as the premiere destination to exclusively sell the new collection, which will appear in Lacoste stores internationally from the 15th April. It features a quirky twist on sporty classics and includes polos, t-shirts, shorts, beach bags, watches, and visors. This round, the famous Lacoste crocodile has made a friend, with emoji style tennis balls making an appearance. Designer, Yaz Bukey, has described the story behind the range as a “game of seduction” between the cheeky tennis balls and the signature crocodile. Each with their own facial expression, one tennis ball is scared of the crocodile, the second wears sunglasses and is simply disinterested, and the third, featuring Yazbukey’s signature red lips, “just wants to kiss him”.

This week, the world of male fantasy that epitomises luxury German fashion house, Phillip Plein, reached epic new heights. On March 30, the brand hosted a party at their private jet-inspired ‘Air Force Plein’ bar, which was installed last year inside the Milanese flagship. The store, which sells ‘Phillip Plein’ and ‘Plein Sport’ ready- to-wear and accessories, is a man cave of epic proportions, spanning across three stories. Not only does it feature the famous bar, but guests may also wander through an exclusive art gallery, featuring work by the painter Alec Monopoly. The party itself was the first of what is set to become a monthly tradition, with selected guests being invited to attend the exclusive soirées. Each event shall have the theme of a different flight destination, with the first paying tribute to Miami. Creating the full experience of a private jet, the parties feature alluring hostesses in custom designed uniforms, a pilot DJ and an endless serving of decadent canapes and Phillip Plein’s signature champagne. Want to know where you’re ‘going’? Simply look out the window – or rather, the window shaped screens that line the bar and will broadcast footage of the chosen ‘destination’ of each party.

This luxurious new venture is not unexpected from the outspoken and wild designer, who in the past has featured roller-coasters, exploding golden monster trucks and jet skis in his shows. For his 2017 Spring Summer show, ‘Alice in Ghetto Land’, the Duchess of music, Fergie, appeared in an extravagant fantasy land featuring candy houses, giant garden gnomes, and a colossal pink and blue carousel. If his parties are as epic as his shows – which according to everybody who has had the fortune of attending, they are, sign us up for the next one!

The Girl on Fire, Miss Jennifer Lawrence has added another notch to her star-studded belt this week as she appeared as the face of Dior’s new Autumn/Winter 2017 campaign. The campaign was released as a series of effortlessly cool, elegant black and white photos, shot by photographer Brigitte Lacombe. Promoting feminism, Lawrence, who has been a muse for the high fashion house for years, is pictured wearing a white t-shirt with the slogan “We Should All Be Feminists”. The tee, which will be sold in Dior boutiques until Mid-May, will set you back $710. Picking up one of these shirts will score you a double dose of karma, with a portion of the profits going towards Rihanna’s Clara Lionel Foundation, which funds educational scholarships for students in need globally.

The campaign itself is only one of the ways Dior’s creative director Maria Grazia Chiuri is showcasing her proactive stance towards feminism. The photos form part of a larger project called “The Women Behind The Lens”, which uses only female photographers. The goal is to create “a body of photographic work made exclusively by women delivering their personal vision of the collection.”

Our muse Jennifer Lawrence is still maintaining her cool and relaxed allure ‎in her new campaign for Dior, while rocking the emblematic 'We Should All Be Feminists' T-shirt and the revamped studded 'Diorama' bag by ‎#MariaGraziaChiuri. © @BrigitteLacombe

Couture Gowns and Ballerinas Grace the Stage in New York

The worlds of dance and fashion collided this week with the premiere of choreographer Blanca Li’s show, ‘Goddesses and Demonesses’, taking centre stage at the New York City Centre. Named by The NY Observer as “one of the greatest choreographer’s of our time”, Li is a veteran of the stage, having worked with Beyonce, Daft Punk, Kanye West and Coldplay. To the fashion world, she is no stranger either, having starred in a video for Louboutin, and choreographed the fashion shows of Stella McCartney and Jean Paul Gaultier.

Her new show celebrates femininity while exploring its complexities, looking at the woman’s role throughout history as both the sinner and the saint, as well as the nurturing mother and femme fatale. Blending legend, mythology, classical ballet, and contemporary dance, Li is joined in her performance by the principal dancer of Russia’s Bolshoi Ballet, Maria Alexandrova. The performance, which initially debuted in Paris in December 2015, sees the fiery Spanish Li and the ethereal ballet dancer Alexandrova meet on stage in a flurry of dazzling dresses. The original, couture costumes were designed by fashion moguls Stella McCartney, Jean Paul Gaultier, Azzedine Alaïa, and Sophie Theallet.

To see the show, make sure to get in quick. The New York performance is showing between March 30 to April 2.

For fans of the brilliant Martin Margiela, Belgium is the place to be, as this week the MoMu Fashion Museum in Antwerp opened its newest exhibition “Margiela: The Hermès Years”. The exhibition focuses exclusively on the designer’s seven years as creative director of Hermès from 1997 to 2003, showcasing the elegant mark he made on the French fashion house.

Walking into the exhibition, you will find yourself being complimented in French by a tender, male voice playing from the speaker system. “I wanted to have it at the start of the exhibition so that all women pass through a shower of compliments”, explained Kaat Debo, the director of the museum and curator of the Margiela exhibition. “I think it illustrates the respect for women that is in Martin’s entire body of work for Hermès.” The exhibition space features walls painted either orange or white, which show “both worlds of Martin – Maison Martin Margiela and Hermès – next to each other”. The orange world is a tribute to the signature colour of Hermès, while the white is reminiscent of Martin’s pristine studios. The studios were iconic for their purely white furniture, white chiffon chandeliers, and the fact that staff dressed in white lab-coats.

The exhibition will run from March 31 – August 27, but for those of you who cannot make it to Belgium, don’t despair. The opening of the exhibition coincided with the release of a book with the same name that similarly details Margiela’s reign at Hermès.

When the two worlds of the designer Martin Margiela meet: Margiela, the Hermès Years from 31st March until 28th August 2017 #momuantwerp #margielathehermesyears

The stunning green gem has been seen as a symbol of luxury and power for centuries, with the illustrious Queen of Egypt, Cleopatra, adorning her palace and herself in the precious stones. Unfortunately, where there is luxury, crime and exploitation have often been shown to follow, and the emerald is no exception. In the 90’s particularly, the stones were heavily linked to the Columbian drug cartel trade and the mafia. This week, the Gübelin Gem Lab sought to make emeralds more ethical, unveiling the revolutionary ‘Emerald Paternity Test’. The accompanying technology uses DNA nanotechnology to prove the provenance of emeralds all the way back to the mines.

The customised DNA-based particles have a diameter of 100 nanometers (0.0001mm) and are invisible to not only the naked eye but also to the best optical microscope. After being mined, rough crystals are tagged with the nano-particles, which have unique DNA encryptions identifying the mining location, time, and the miner. The nanoparticles are resistant to all cutting, cleaning, and polishing, and importantly do not affect the appearance, quality, or properties of the emerald. This technology is the first endeavour of the ‘Provenance Proof’ initiative, which aims to bring more transparency to the gemstone industry. At any later stage, consumers, jewellery houses, governments, or retailers, can submit their jewel to an authorised lab for a ‘paternity test’, to reveal the details of origin.

Look for the ‘Provenance Proof’ label and shop with a clear conscience next time your shopping spree takes you to the jewellery store. Ethical emeralds? How could you resist?

The House of Gübelin presents the world’s first jewel, set with an emerald with a Provenance Proof label. Thanks to the Gübelin Gem Lab’s new technology, the Emerald Paternity Test, information about the complete supply chain of this gemstone is available and it can be traced back to its exact mine of extraction, in this case to the Belmont Group; a mining company well-known for its ability to produce ethical and conflict-free gemstones. Learn more about the new technology under @gubelingemmology or click on the link in bio.