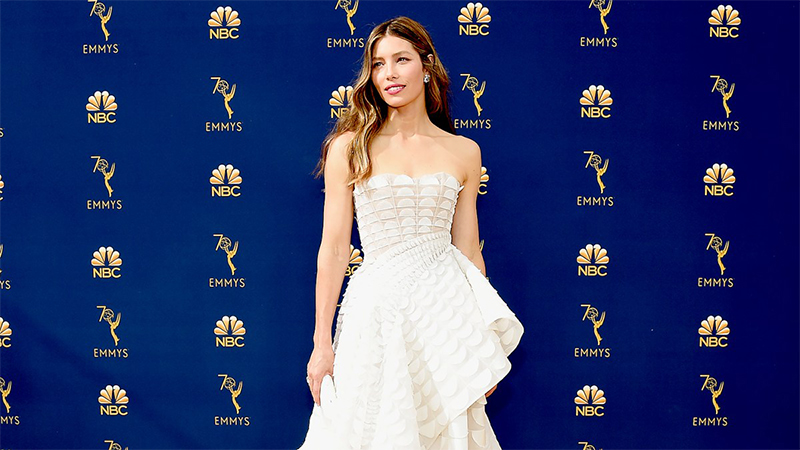 This week in fashion, stars stun at the Emmys, LA bans the sale of fur, Gucci’s new campaign is once again a success, while Diesel’s latest campaign is copping some backlash. Find these stories and more as we reveal this week’s top international fashion news.

All your favourite TV celebrities flocked to the red carpet for the 2018 Primetime Emmy Awards. The stars of the small screen certainly put their best foot forward fashion-wise, proving they’re every bit as glamours as those on the silver screen.

Actress Michelle Dockery and Joey King of The Kissing Booth proved that princess gowns were back in a big way. While some other celebrities, like American Horror Story Sarah Paulson, opted for old Hollywood style gowns. Paulson, who scored her seventh Emmy nomination wore a black Oscar de la Renta gown complete with a feather skirt and plunging neckline. Sinner star, Jessica Biel stunned in a sleek white number from Ralph and Russo’s 2018 Fall Collection. Darren Criss looked slick in an all black suit and tie ensemble. The Former Glee star took out the award for the best actor for his performance in the mini-series The Assassination of Gianni Versace: American Crime Story. Regina King rocked a fluorescent lime green number as she accepted her award for lead actress for her starring role in Seven Seconds.

Los Angeles Has Banned the Sale of Fur

Following San Francisco, Los Angeles has become the largest city in the United States to ban the sale of fur. As voted by the Los Angeles city council, the ban will include everything from coats, handbags and shoes. The sale of faux fur is still permitted however any items partially or fully made from fur are no longer permitted to be sold within the parameters of LA. The new laws will come into effect 24 months after the final language has been passed.

City councilmember, Bob Blumenfield said, “It’s 2018 — there’s no excuse for being complicit in this inhumane and unnecessary trade. We will continue to be a leader in animal welfare efforts and must work with other cities and states until this vile practice is ended across our nation.” Animal rights activities have long had a strong presence in LA and the ban has received positive reactions.

You may remember Harry Style posing with puppies and chickens for Gucci’s cruise men’s tailoring campaign? Well, just when you thought things couldn’t get any cuter, the label has dropped another campaign. And this time it features baby farm animals. Set in the historic Villa Lante gardens, north of Rome, Harry Styles poses holding piglets, petting lambs and relaxing with a few baby goats.

The former One Direction frontman sports a range of looks from the upcoming Cruise 2019 collection. In true Gucci style, the line features bold prints and signature Gucci flourishes. Alessandro Michele is currently at the helm of the Italian fashion house and is responsible for this adorable campaign, which will be released fully in November.

Diesel has dropped an anti-cyberbullying campaign to go along with its Autumn/Winter 2018 line. Nicki Minaj stars in the ‘Hate Couture’ campaign alongside Gucci Mane, actors Bella Thorne, Tommy Dorfman and Yoo Ah-in, and model Jonathan Bellini. The campaign saw celebrities wearing shirts donning the most hateful messages they have received online. Sporting a shirt that reads “the bad guy,” Nicki Minaj has been called out on Twitter for being an inappropriate addition to the anti-bullying campaign.

The rapper has been at the centre of numerous conflicts. She infamously insulted Wanna Thompson, who commented on her music earlier this summer. She has also been known to encourage her fans to attack her critics over Twitter. People are calling the campaign tone deaf and claiming it makes a mockery of cyberbullying. However, Diesel responded to the backlash, stating, “We’re here to support anyone who’s getting hated on, and Nicki is one of them.” All proceeds raised from the limited-edition pieces will reportedly be donated to anti-bullying programs at its OTB foundation, a not-for-profit organization.

@nickiminaj has received her share of online hate. Well, she might have a thing or two to say about that. 19/09 . . #regram @nickiminaj "You need people like me. So you can point your finger & say: THAT’S THE BAD GUY‼️ Got a surprise for anyone who’s ever been labeled #TheBadGuy ?☺ Stay tuned ? ????? @diesel 9|19"

Irish designer label, Orla Kiely has gone into administration. Recognised for its bright colour palettes and interesting patterns, the retail and wholesale side of the brand ceased trading last Monday. Three of the label’s outlet stores have also closed.

The brand’s website has ceased operations and staff were made redundant immediately following the announcement on Monday. Founder Orla Kiely and her husband Dermott Rowan released a statement which read, “Thank you for embracing our brand and designs throughout the years and for your ongoing support.”