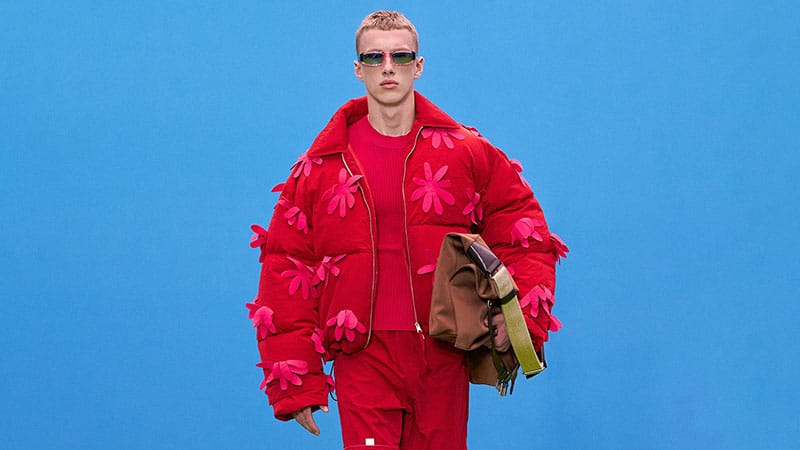 Menswear and Haute Couture Paris Fashion Week is back, and Neiman Marcus goes fur-free. Stay up to date with the hottest international fashion news stories of the week.

Menswear Paris Fashion Week has returned in full swing but at half the capacity. Designers like Dior, Vetements, and Jacquemus presented their SS22 collections, featuring plenty of celebrities. For Jacquemus’ first show in almost a year, the runway was set in a studio with blue walls and a green floor. “I wanted to focus on the clothes, the silhouettes, the colors, the fabrics, the details, and the energy of the models,” said Simone Porte Jacquemus. The collection featured tailored suits, cropped cardigans, and split hems in hot pink, red, and orange shades.

The long-awaited ‘secret project’ of the Gvasalia brothers is finally here – Vetements is launching a new brand. During PFW, the brothers shared a teaser video of the label, which launches on July 22. According to the designers, it will be “a brand that wears something old, something new, something borrowed, and something blue,” catering to all genders but still featuring men’s tailoring. Dior’s SS22 showed at half-capacity – launching its Dior x Air Jordan collaboration and Travis Scott’s and Kim Jones’ collection.

Bianca Saunders has won the ANDAM Prize in Paris. The London-based designer took home an award of €300,000 and a mentoring program with Balenciaga’s President CEO, Cédric Charbit. “It was amazing meeting and presenting to people that I really admire,” she said. Saunders plans to use her prize money to show her collection in Paris, then expanding as a global brand in the Asian market. “Mentorship from such a key player in the industry plus financial support like this will help me really focus on growing my business and realizing my lifelong dream — establishing Bianca Saunders as a global fashion brand,” she explained. The award’s finalists include GmbH, Area, Rokh, Ludovic de Saint Sernin, Casablanca, and Wales Bonner.

Skims is officially the provider of undergarments and pajamas for the USA team at the 2021 Tokyo Olympics. The piece includes t-shirts, bras, underwear, and shorts – each featuring the American flag and Team USA’s logo. Ever since I was 10 years old, I’ve heard every single detail about the Olympics from my stepdad,” said Kim Kardashian, the owner of Skims. “When I received the call inviting Skims to be a part of @TeamUSA, every moment I’ve spent admiring the strength and energy of the Olympians from the sidelines came full circle.” The campaign that features alongside includes USA athletes Alex Morgan, Scout Bassett, and many others. The collection will be available for purchase on July 23.

Neiman Marcus is vowing to go fur-free, closing its fur salons by early 2023, and plans to explore ethical alternatives. “It is clear the future is fur-free, and that includes the ultra-luxury space. As a leader in luxury retail, NMG has an opportunity to make a positive impact and help build a better future for our industry,” said CEO Geoffroy van Raemdonck. The company follows in the footsteps of other brands like Macy’s, Bloomingdales, and Saks Fifth Avenue – all of which have stopped the sale of fur.