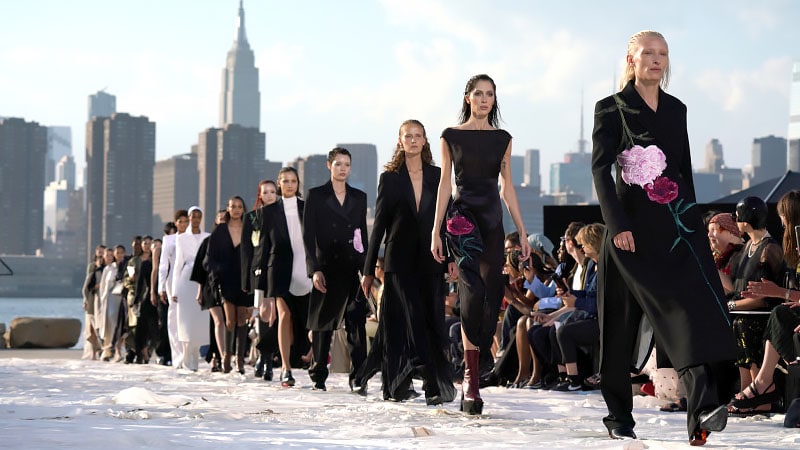 New York Fashion Week is back in a big way, and Nensi Dojaka wins the LVMH Prize for Young Designers. Find these stories and more as we uncover the top international fashion news stories of the week.

NYFW is Back for SS22

New York Fashion Week is back for Spring/Summer 2022, and it’s better than ever. Christian Siriano kicked off the event with his SS22 collection, followed by Michael Kors, Peter Do, and LaQuan Smith, to name a few. Carolina Herrera celebrated its 40th anniversary with 80s-inspired oversized sleeves, graphic stripes, and bright hues. Moschino’s runway featured a flurry of throwback ’90s patchwork, teddy bears, plastic jewelry, and pastel shades.

Peter Do presented his collection with Manhattan’s skyline as the backdrop. “I wanted to show the skyline as a nod to the point of arrival for my parents, which is why I’m here,” he said. “For us, New York has always been home. But with the rise of COVID-19 and Asian American hate, with people telling us to go back to where we came from, I’ve been thinking a lot about Vietnam.”

Nensi Dojaka is the winner of the 2021 LVMH Prize for Young Designers. The London-based Albanian designer began her label in 2017 – her strappy, mesh dresses and shirts take inspiration from lingerie and ’90s style. Each garment is produced in Italy from eco-friendly source materials. The likes of Bella Hadid, Adwoa Aboah, Emily Ratajkowski, and many others have worn her pieces on the red carpet.

Among the jury at this year’s awards included Virgil Abloh, Kim Jones, Stella McCartney, and Marc Jacobs, and many others. “Her little black dress somehow won us over. It can be a new classic,” shared Virgil Abloh on her win. According to Marc Jacobs, the decision was unanimous. “It hasn’t happened for as long as I can remember,” he said.  Nensi Dojaka takes home €300,000 and a one-year mentorship program with experts from LVMH. The Karl Lagerfeld Prize was awarded to three recipients: Colm Dillane, founder of KidSuper; Lukhanyo Mdingi, a South African designer; and Rui Zhou, designer of the genderless brand, Rui.

AZ Factory is honoring the late designer, Alber Elbaz. The fashion start-up will work with more than 40 designers on a collaborative catwalk. Love Brings Love will take place on October 5th, closing out Paris Fashion Week. “We are so moved and humbled that today’s best creative minds are joining the AZ Factory team in paying tribute to Alber’s memory,” shared Laurent Malexazze, CEO of AZ Factory. “The show will be a powerful expression of love and a beautiful celebration for our dear Alber. We know that he would have been incredibly honored to be remembered in this way.”

The schedule for Milan Fashion Week is here. From September 21-27, the Italian fashion week will present in-person shows. Currently, there will be 42 shows out of 65 in total. Currently, confirmed designers include Versace, Giorgio Armani, Fendi, Prada, Etro, Max Mara, and others. Camera Nazionale Della Moda Italiana President, Carlo Capasa, said the event would be ‘inverted’ compared to digital editions, something that “gives [them] a powerful injection of energy in this moment.”