The Academy Awards is one of the biggest events of the year, and as Hollywood’s A-listers gathered for the prestigious awards ceremony our eyes were on the dresses, both on the red carpet and at the after party.

As with every major event there are always notable trends, and some of the trends we spotted at the 2015 Oscar’s included:

It looked as though many celebs ditched their underwear for the after-parties because there was a lot of skin showing. Rita Ora was one such celeb who wowed (and showed part of her butt) in her sheer black gown at the Vanity Fair Oscar bash. Model Irina Shayk chose an Atelier Versace cutaway gown that exposed half her body, and model of the moment Gigi Hadid also opted for a gown that revealed an ample amount of skin, with a high side-slit and beautiful swirl patterns across the bodice.

It’s clear that the women who opted to show a lot of skin with their risqué dresses made an unforgettable appearance. 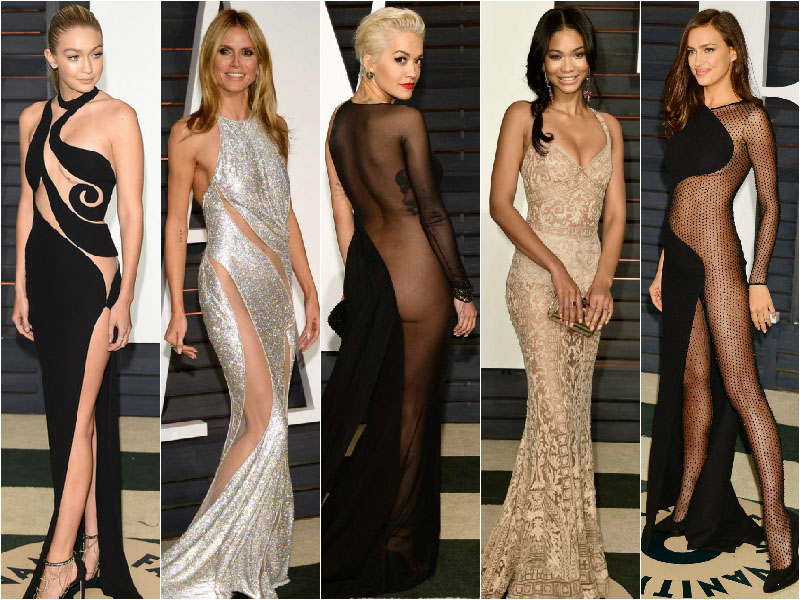 Celebs including Oprah, Zoe Saldana, Anna Kendricks (who wore Thakoon) and Octavia Spencer, opted to wear gowns that were inspired by Grecian draping. Octavia’s look was quite possibly our favourite as she walked the red carpet in a beautiful pale blue embroidered gown.

Oprah’s blush-coloured Vera Wang gown also deserves a mention, because the fit was superb and proved that this style is one of the most flattering thanks to the careful placing of chic pleating. Also, is there anything that this woman cannot do? 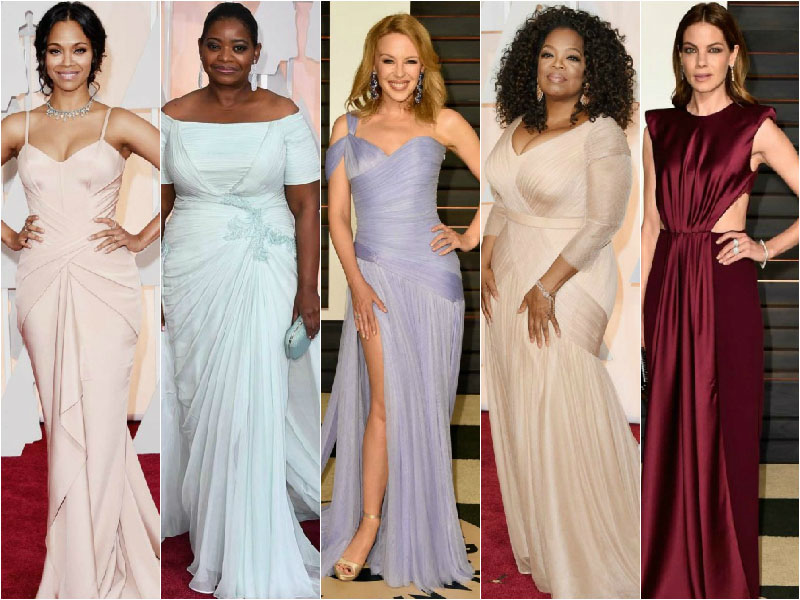 Stars took to the red carpet in dazzling, shiny silver gowns to give the night a touch of classic glamour.

Among the celebs who shone on Sunday night was former supermodel Heidi Klum, who wore a sparkling Versace gown; Anna Faris, who attended the Oscar’s in a sparkling jewel-encrusted Zuhair Murad Spring 2015 Couture gown; and Miranda Kerr caught everyone’s eye in her white Emilio Pucci gown, complete with thousands of gold embellishments around the lining. 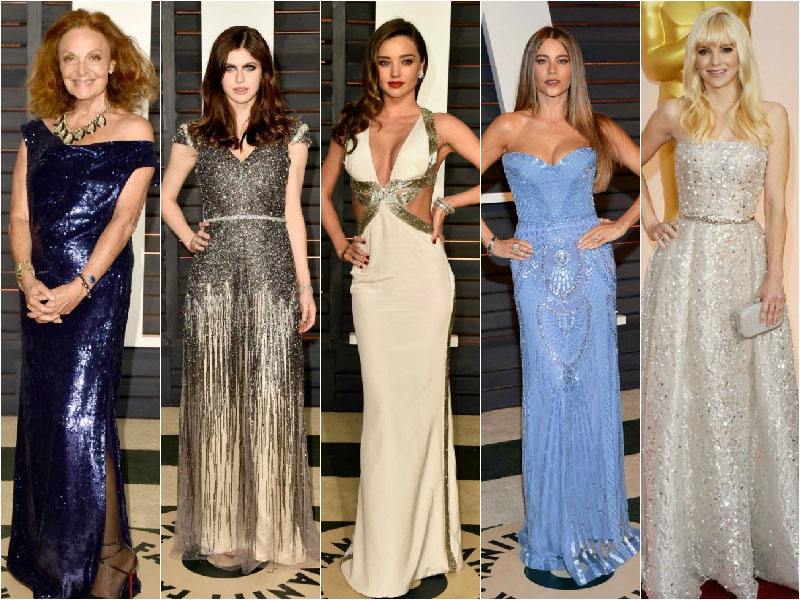 Some celebs decided that boy/girl styling was a great option for an after-party look, and we have to agree: We loved how Birdman actress Naomi Watts ditched her Armani gown for a white suit with plunging neckline, and how Solange Knowles wore a striking red Christian Siriano Fall 2015 crepe cape top and pant (which many people did not like, but we disagree). 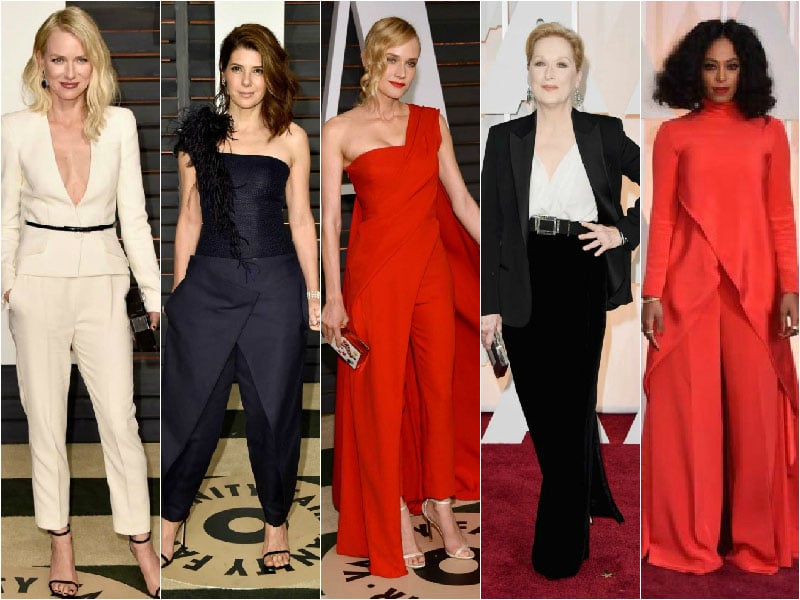 Tube dresses were the most popular choice for the 2015 Oscar’s and we loved how each celeb rocked the style in their own way. From Gone Girl’s Rosamund Pike’s striking red tube dress to Rita Ora who looked breathtakingly beautiful in her super feminine midnight blue and gold gown –which she styled with around $7.5 million worth of Lorraine Schwartz jewellery, including 40-carat, Victorian-inspired diamond drop earrings — it’s clear that tube dresses were a popular choice among Hollywood’s elite.

We also saw that the pearl colour tube dress was a popular choice on the runway — Nicole Kidman, Kerry Washington, and Lupita Nyong’o were all ladies who rocked this colour and design — but in particular we were blown away by Oscar-winning star Julianne Moore’s gown.

Moore’s gown was a custom-made Chanel Haute Couture gown, designed by Karl Lagerfeld. The gown was simple, yet impressive in it’s construction, which took 987 hours to complete with 80,000 hand-painted sequins expertly sewn on this gorgeous garment. 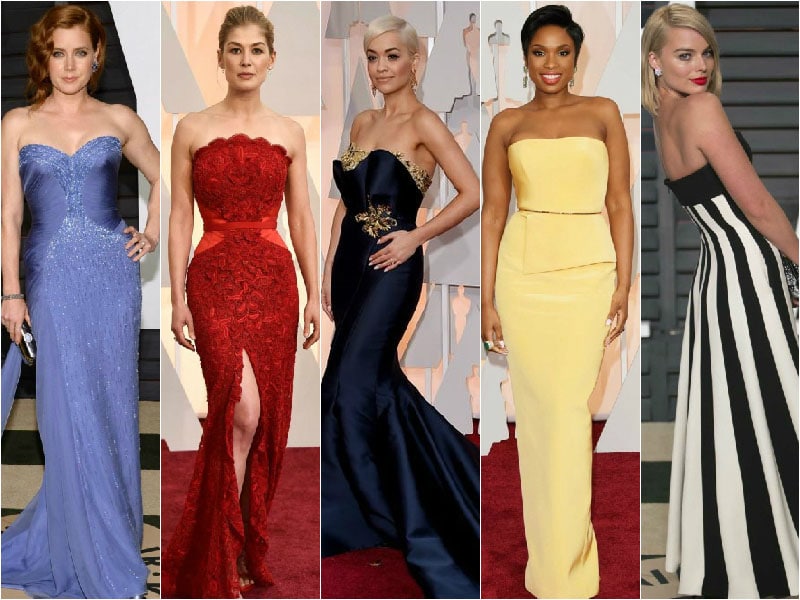 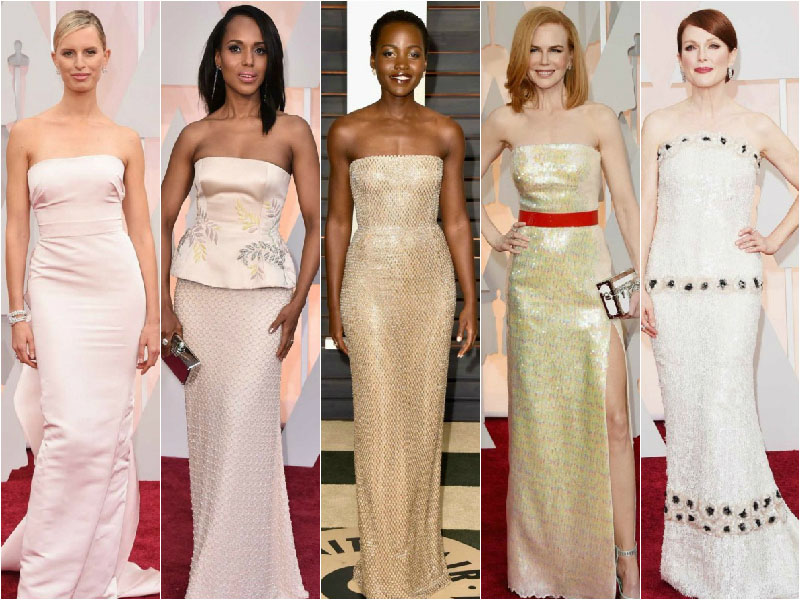 While many celebs opted for simple colours (because prints can be risky on the red carpet) florals were definitely one of the trends we saw on the runways: among the celebs who chose to wear these textured, fun looks were Michelle Schumacher, Chloe Grace Moretz, Rashida Jones, Marion Cotillard and Keira Knightley.

Keira Knightley quite possibly has the best maternity style ever, and she looked amazing in her floor-length floral Valentino Couture gown. Keira has proven that she is a fan of loose-fitting, flowy silhouettes during her pregnancy and her choice for the red carpet was no exception.

We also loved Marion Cotillard’s floral ensemble that she wore to the Vanity Fair after party. The great thing about this look is that it was actually a skirt and top combo, both Giambattista Valli Haute Couture and although it was a risky choice, we think she pulled it off. 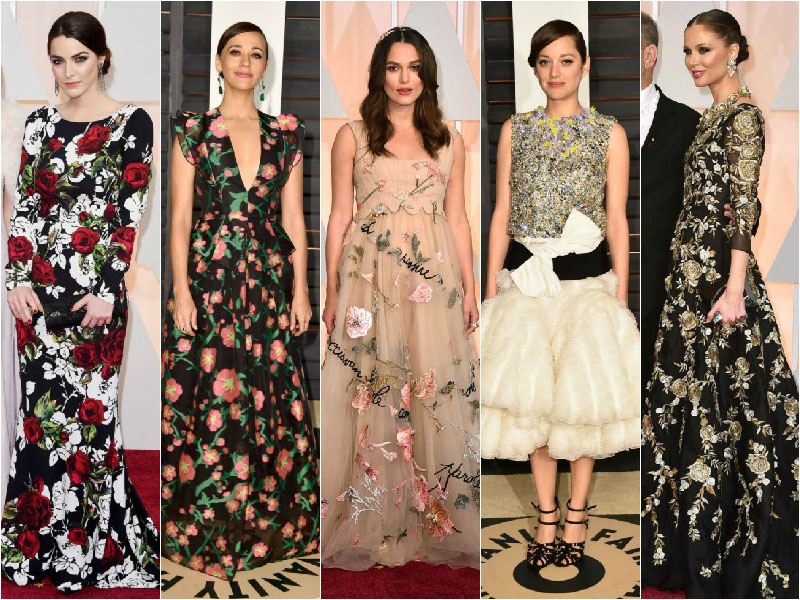