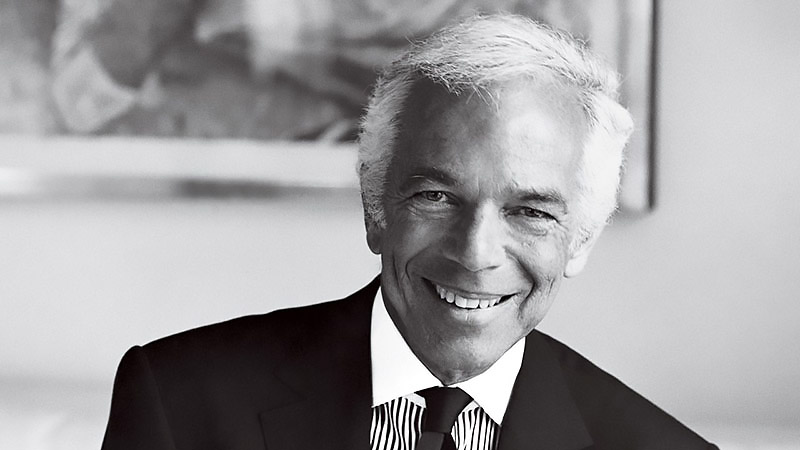 This week in fashion, Zara is pledging to make its clothes 100% sustainable and Ralph Lauren is getting his own film. Read these stories and more as we uncover the top international fashion news of the week.

HBO is Creating a Film About Ralph Lauren

Ralph Lauren is celebrating his 50th anniversary in the industry with a film by HBO, Very Ralph. The movie is a deep dive into his life and will include interviews with Anna Wintour, André Leon Talley, the late Karl Lagerfeld and many more. The Polo brand was established in 1968 and has become one of the world’s most influential designers. Very Ralph debuts on November 12, exclusive to HBO.

Versace has released a pair of sneakers in honour of the infamous dress worn by JLo in 2000. The gown shut down the red carpet and inspired the launch of Google Images. The shoe, Concepts x Versace Chain Reaction Sneaker, is also in honour of the singer’s 50th birthday and the upcoming 20th anniversary of the piece.

It is featuring the same leaf pattern in green and blue, with a chunky heel and a nude insert to match Ms Lopez’s cleavage in the dress. “Usually if you come to a fitting of mine, there are tons of dresses and tons of shoes,” said JLo. “There’s always so many choices. But this day we only really had a choice between two dresses. One was kind of like a white dress, and the other was the Versace jungle-print dress…I put on the green dress and come out, and Benny [Medina] goes, ‘That’s it. That’s it. Don’t even talk about it. That’s the dress.”

Kanye is filing a trademark for the name Sunday Service, for a new clothing line. The name is reminiscent of the weekly concerts he holds where a choir sings covers of his songs. The trademark covers apparel including “bottoms, dresses, footwear, headwear, jackets, loungewear, scarves, shirts, socks and tops”.  Kanye has made a name for himself with the launch of Yeezy in 2015 and his collaborations with other designers. The line is yet to be released.

Kanye West is adding a fashion line to his portfolio.⁣ ⁣ The musician and designer has filed a trademark for “Sunday Service,” the name of his weekly concerts where he gathers a choir to sing gospel versions of his songs. ⁣ ⁣ Tap the link in bio for more. ⁣ ⁣ Report: @laylailchi⁣ ?: @lexieblacklock .⁣ .⁣ .⁣ .⁣ .⁣ #wwdfashion⁣ #kanyewest⁣ #sundayservice

Elizabeth Hurley’s son, Damian, channelled his mum’s iconic safety pin dress at launch for Pat McGrath in London. The actress wore the Versace gown in 1994 with then-boyfriend, Hugh Grant, at the Four Weddings and a Funeral premiere. Her son wore a suit covered in gold pins at his debut into the modelling world. Damian is part of the launch of Pat McGrath’s new foundation line Sublime Perfection: The System, in his first beauty campaign.

Zara Pledges to Use Sustainable Fabric by 2025

Zara is pledging to use 100% sustainable fabric by 2025. The brand, owned by Inditex, will join other brands including Zara Home, Pull & Bear, Massimo Dutti and Bershka. The brand no longer provides plastic bags to its customers and will phase out the use of fibres from endangered forests. It will also stop releasing toxic chemicals in the air by 2020 along with zero waste, in partnership with Zero Discharge of Hazardous Chemicals.

“We need to be a force for change, not only in the company but in the whole sector,” explained Pablo Isla, Inditex’s CEO. “We are the ones establishing these targets: the strength and impulse for change is coming from the commercial team, the people who are working with our suppliers, the people working with fabrics. It is something that’s happening inside our company.”

From #fastfashion to #luxury, big brands want consumers to know they care about the environment. In the last week alone, Inditex SA — owner of Zara, the world’s biggest fast fashion brand — launched a suite of new sustainability targets, including a commitment to only use recycled polyester and ensure all its cotton, linen and viscose are produced more sustainably before 2025. Meanwhile, luxury conglomerate LVMH Moet Hennessy Louis Vuitton has made an effort to bolster its climate credentials by taking on eco-conscious designer Stella McCartney as an advisor alongside a minority stake in her brand.⁠ ⁠ Underpinning these moves, and a flurry of similar commitments and investments over the last year that also take into account the industry's treatment of workers, is a rising tide of consumer awareness and regulatory scrutiny on the fashion industry’s environmental impact. The challenge for the fashion world is finding a way to operate sustainably and profitably in the long-term. Fundamentally more sustainable fashion, means less fashion.⁠ ⁠ Nonetheless, brands are increasingly eager to champion their sustainability credentials in a bid to entice younger consumers who claim to care deeply about how and where their clothes were made — 42 percent of millennials say they want to know what goes into products and how they are made before they buy, according to The Business of Fashion and McKinsey & Company’s annual State of Fashion report.⁠ ⁠ In the near-term, brands see big potential in conscious consumption, with a growing number of wholesalers carving out spaces in-store and online dedicated to more sustainable products. But longer-term, the trend raises a central tension for many brands: in an era of growing consciousness and concern about the strain mass consumption is placing on the planet and its resources, can brands be #sustainable and continue to grow at the same time? [Link in bio] ?: @zara⁠