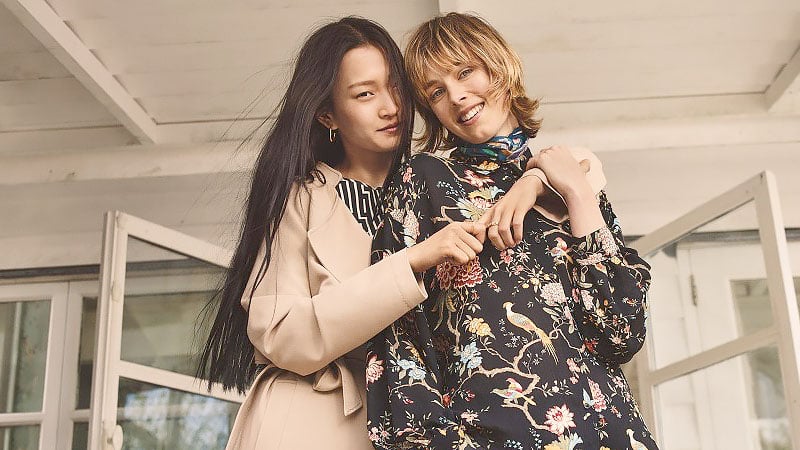 This week in fashion, Brandon Truaxe the founder of Deciem dies, H&M collaborates with British textiles brand GP & J Baker, Net-a-Porter has finally launched its kidswear collective and Viktor & Rolf’s new collection debuted at Fashion Week. Find these stories and more as we reveal the top international fashion news of the week.

High street favourite H&M announced its inspired alliance with heritage British textiles brand GP & J Baker last July but now the capsule collection has firmly hit Australian shores. Available to shop in-store on January 31, the colour-driven GP & J Baker x H&M collection is based off classic prints from the GP & J Baker archives, which goes back more than 100 years to when the stalwart brand was founded in 1884. The in-house design team at H&M hand-picked some of GP & J’s most iconic and captivating prints, including Magnolia, which William Turner painted for GP & J Baker in 1913. Also appearing in the must-have collection are forever favourites like Oriental Bird, Blossom and Hydrangea Bird. They are refreshingly offset with some of the brand’s more geometric treats, giving the line-up a discernibly fashion-forward feel.

Net-a-Porter has Launched its Kidswear Collective

“The new year felt like the perfect time to launch this collective,” Net-a-Porter’s global buying director, Elizabeth von der Goltz, said. “It’s January – kids are back to school but there’s this idea of coziness and wanting to feel comfortable.” The capsules, accordingly, reflect this with comfy cardigans, cashmere sweaters, track pants and trainers. “Whether it’s for ourselves or for our kids, we are always thinking about wellness in January so this is an extension of that – it’s luxe athleisure for kids!”

THIS JUST IN: Kid's casuals. Discover the biggest trends in little sizes with our collection of closet must-haves ? Tap the link in bio to shop your favorite looks from Instagram at #NETAPORTER.

After Alber Elbaz left the company in late 2014 (working 15 years with the brand), Bouchra Jarrar took over, but he stayed for just over a year. Olivier Lapidus replaced Jarrar, but left a few months later. Lanvin has since been looking for the right designer to take the lead. And they believe they have found what’s been missing in Sialelli. The label’s chief executive officer, Jean-Philippe Hecquet said in a statement that they believe the designer’s vision will “bring [Lanvin] back to life”.

Some designers aim to make a fashion statement when they reveal their newest collection—and now Viktor & Rolf have done it! Earlier this week, the fashion house debuted their latest Spring/Summer 2019 Haute Couture collection in Paris. One by one, dresses featuring voluminous layers of ruffles and tulle graced the runway on a theme with the brand’s bold and theatrical designs. Though it was something else that got people talking—or rather, reading.

Each dress was adorned with a different statement. They ranged from the uplifting (“I want a better world”) to the antisocial (“Sorry I’m late. I didn’t want to come.”). The dresses certainly speak a very frank mind of their own.

Brandon Truaxe, the founder of Deciem, has died after a year-long public unravelling. He built the Canadian skin care company into a worldwide brand through radical pricing and social media marketing. But his increasingly erratic behaviour, documented on his company’s Instagram account, ultimately cost him his position as CEO.

According to a statement in Canada’s National Post, “it is understood he fell from a condominium building near Toronto’s downtown.” Riyadh Sweedan, a Deciem employee who said he also lived with Truaxe and had been his boyfriend, told the paper, “I don’t think he jumped. I think he fell.” A spokesperson for the Toronto Police Service would not confirm any information about the incident. They, however, revealed that they had been called to Truaxe’s neighbourhood and found no evidence of criminal activity.

Brandon, our founder and friend. You touched our hearts, inspired our minds and made us believe that anything is possible. Thank you for every laugh, every learning and every moment of your genius. Whilst we can’t imagine a world without you, we promise to take care of each other and will work hard to continue your vision. May you finally be at peace. Love, (forever) your DECIEM ❤