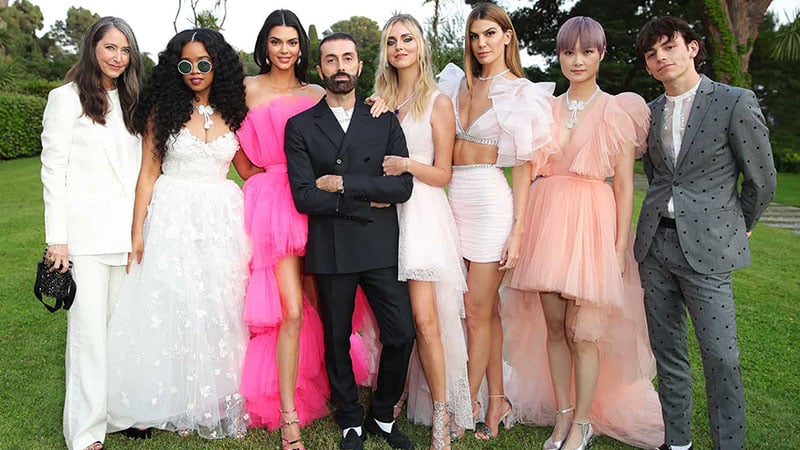 This week in fashion, Rihanna unveils her new Fenty collection in Paris, and Giambattista Valli collaborates with H&M. Find these stories and more as we reveal the top international fashion news of the week.

Following in the footsteps of brands like Gucci, Michael Kors and Burberry, this week Prada and Miu Miu announced they have decided to become fur-free fashion houses too. The luxury brands—which are both owned by The Prada Group and helmed by Creative Director Miuccia Prada—vowed that as of September animal fur will no longer be used across any collection. In an official statement, Miuccia Prada explained, “The Prada Group is committed to innovation and social responsibility, and our fur-free policy is an extension of that engagement.” She continued, “Focusing on innovative materials will allow the company to explore new boundaries of creative design while meeting the demand for ethical products.”

Italian-born designer Giambattista Valli may be known for his whimsical, haute couture gowns, though this week, the creative director announced that he has been working on a decidedly more accessible collection. Valli has collaborated with high-street retailer H&M on a capsule collection which was unveiled earlier this week at Cannes Film Festival. Debuted by celebrities including Kendall Jenner and Chiara Ferragni, the capsule collection features a heart motif and the voluminous tulle aesthetic Valli has become known for. Selected pieces from the range will be available at limited H&M locations worldwide on May 25, while the full collection will hit shelves in November.

Creative, cool and couture-like. Welcome to the exciting world of the Paris-based master of beauty and sophistication. @giambattistavalliparis is this year’s designer collaboration! @hm #Project? On 25 May, we will release a pre-drop from @giambattistavalliparis x @hm with a limited edition of nine looks, as well as a few accessories, in selected stores and online. The main collection will launch on 7 November 2019.

After announcing the creation of her new ready-to-wear brand, Fenty Maison, a few weeks ago, Rihanna officially debuted the LVMH-backed venture in Paris this week. Amongst a small crowd of fashion industry insiders, Rihanna unveiled her first collection, which consisted of 18 individual looks. The curated range features boxy denim silhouettes, sharp suiting and bold accessories. According to reports, the collection will retail for between approximately $200 – $1,500 USD and will be available online as of May 29.

make room in your closets. we coming @FENTY FENTY.com ‼️

Margot Robbie is Chanel’s latest fragrance ambassador. The Australian actress is in good company, joining a star-studded list of fellow Chanel fragrance ambassadors, which includes Lily-Rose Depp and Keira Knightley. While Robbie has never fronted a Chanel fragrance campaign, the Oscar-nominee has been associated with the house since 2018, when she was announced as an official Chanel fashion ambassador. Since then, Robbie has worn Chanel to numerous red carpet events and also starred in the brand’s Coco Neige campaign.

CHANEL is pleased to announce @margotrobbie as a new fragrance ambassador for the House of CHANEL. #ChanelFragrance

In what will come as a shock to no-one, Harry Styles has been selected to star in Gucci’s latest campaign. The singer, who is a known devotee of the Italian fashion house, appears in the brand’s Pre-Fall ‘19 collection imagery, modelling a series of tailored menswear pieces. For the campaign, Styles was photographed within several elaborate scenes featuring statues and swans. Creative Director Alessandro Michele dreamt up the campaign concept, which Gucci describes as “a dreamscape of statuary and artworks.”