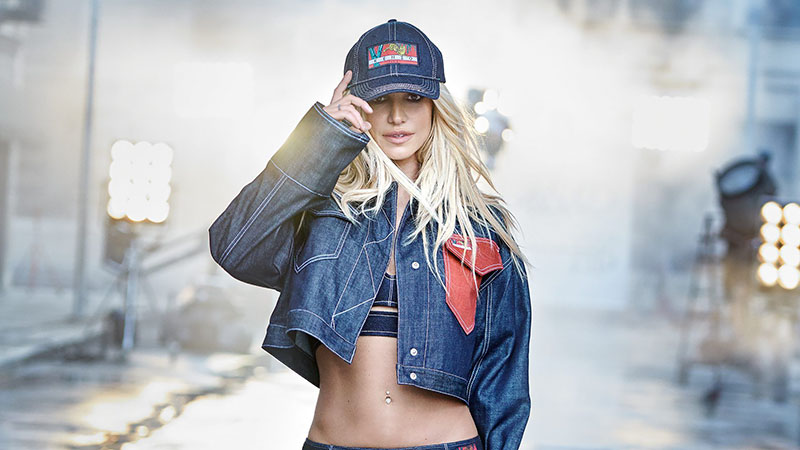 This week in fashion, Britney Spears is back as the new face of Kenzo, Instagram brings its shoppable feature to Australia, the Mercedes Benz Fashion Week Australia schedule is released and Jaden Smith is collaborating with G-Star Raw. Find these stories and more as we reveal this week’s top international fashion news.

We aren’t sure what’s bigger news, the fact that Britny Spears is the star of Kenzo’s newest campaign, or that this is the iconic singer’s first ever luxury fashion campaign. That’s right, believe it or not, this is something that the Queen of 90’s and 2000’s pop has never done. However, it seems Kenzo’s loud, no-holds-barred, 80’s inspired shoot was the perfect way for Britney to make her luxe fashion debut. Shot by Peter Lindbergh in Los Angeles, the bright campaign features thigh-high lace-up boots, sweatshirts, baseball caps stamped with the OG Kenzo logo and cropped denim jackets. This is the label’s second throw-back collection and is a tribute to the debut of Kenzo jeans in 1986. The collection is youthful, fun and oh so Britney.

KENZO LOVES BRITNEY SPEARS ? Get behind the scenes of the new @KENZO campaign with @britneyspears photographed by the legendary @therealpeterlindbergh! The collection is now available on KENZO.com. #KenzoLovesBritney #KENZO #CollectionMemento2

Instagram is the ultimate destinations for fashion inspiration, so its only fitting that you should be able to scroll and shop straight from your feed. Thankfully, Australia is the latest country to be blessed with Instagram’s newest feature which makes shopping your feed not only possible but also a breeze. Stores simply attached the shopping tag to images which allows their followers to view the name and price of the product before purchasing it straight from the app. Myer, Country Road and PepperMayo are the first Aussie stores to test this feature out, but it will soon become available to any business account on Instagram. So say goodbye to your money. Launching in the US last year, the feature was an instant hit and is expected to be rolled out in Brazil, Canada, France, Germany, Italy, Spain and the UK.

The preliminary schedule for Mercedes-Benz Fashion Week Australia was released during an exclusive industry launch earlier this week. The event detailed which designers will be showcasing their 2019 resort collections. Camilla and Marc will open the event as part of the label’s 15th-anniversary celebrations. Camilla will return to close the festival with an evening show. International designer Emilia Wickstead will debut her collaboration with Matchesfashion.com. While the likes of Albus Lumen, Bianca Spender, Lee Matthews, Michael Lo Sordo, Romance Was Born, Christopher Esber and Akira will be present to rep the local labels. The emerging designers will include Blair Archibald, Deadly Ponies, I.am.Gia, Leo + Lin and Pereira Fitzgerald. Musicians Client Liaison will also be debuting their first ever fashion collection. Further announcements are still to come.

G -tar RAW co-owner, Pharrell Williams has tapped Jaden Smith to design the label’s fall 2018 range. Pharelle dropped the news via an Instagram video on Tuesday. We don’t know much about the collection. However, we do know that it will consist of eco-friendly denim pieces. The video used to announce the partnership shows Jaden walking through rails of denim, using a sewing machine and meeting G-Star staff. The promo video, which was shot in G-Star Raw’s archives in Amsterdam, doesn’t give away much about the forthcoming collection. G-Star Raw chief marketing officer Thecla Schaeffer hails Jaden as, “a creator, an artist and an inspiration for the next generation.” Stating that, “He continuously pushes boundaries in multiple fields, in music, design and in sustainability. He inspires us to keep challenging the conventions of sustainable innovation in the denim industry.” The collection is set to be released later this year.

We’re proud to announce that we’ve teamed up with @c.syresmith for a sustainable collaboration. When the forefront of denim manufacturing meets a sustainable visionary artist, only good things can come of it ;) #denim #GStarRAW #sustainable