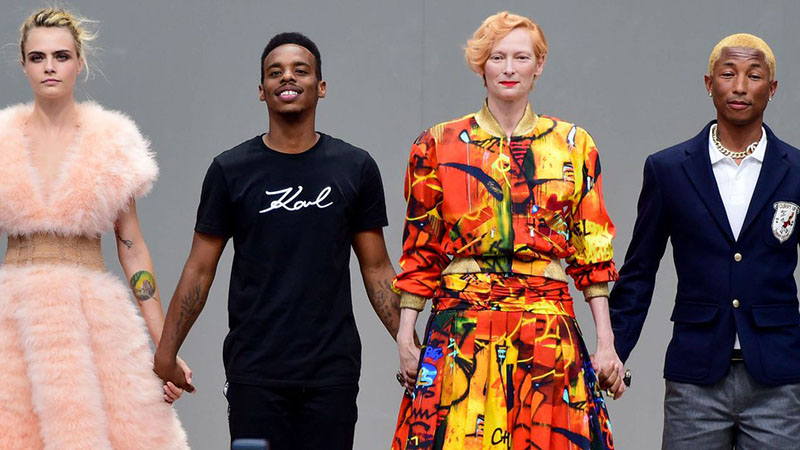 This week in fashion, Ralph Lauren receives an honorary knighthood and Karl Lagerfeld’s Legacy is Honoured. Find these stories and more as we uncover the top international fashion news of the week.

Some of the biggest names in the fashion industry have honoured the late Karl Lagerfeld at the Grand Palais in Paris. The special event, Karl For Ever, paid homage to the designer and his contributions to the industry. Guests included Anna Wintour, Gigi Hadid, Stella McCartney and Cara Delevigne, among many others.

Fashion designer, heiress and socialite, Gloria Vanderbilt, has passed away at the age of 95. Best known for her extravagant life, she was friends with Diane von Furstenberg and Truman Capote. She also had relationships with Frank Sinatra, Howard Huges and Sidney Lumet. In her life, she dabbled in art, acting, designing and being a style icon.

“Gloria Vanderbilt was an extraordinary woman, who loved life, and lived it on her own terms,” said Vanderbilt’s son, Anderson Cooper. “She was a painter, a writer and designer but also a remarkable mother, wife, and friend… she was 95 years old, but ask anyone close to her, and they’d tell you: She was the youngest person they knew — the coolest and most modern.”

Melbourne Fashion Week has released its lineup for the upcoming festival. In its 25th year, the festival will be pulling out all the stops, with amazing shows by some of Australia’s best designers. The lineup includes Thurley, Carla Zampatti, Keepsake the Label and many more. The full program is set for release on July 15th.

Ralph Lauren is the first American designer to receive a knighthood for his contributions to fashion. Although he won’t have the title ‘Sir’ in front of his name, he can use the title of ‘KBE’ following. This comes after the label celebrated its 50th anniversary in 2018. “This is one of the most meaningful honours bestowed at this very special moment in my 50th anniversary,” Mr Lauren said in a statement.

Ralph and Ricky Lauren in London, where Mr. Lauren was presented with the knighthood insignia of Honorary Knight Commander of the Most Excellent Order of the British Empire, the greatest honor the kingdom awards to non-Britons. . It’s a recognition of Ralph Lauren’s contribution to British life over his career, celebrating his impact on the worlds of fashion, business, and philanthropy. . #RalphLauren #RL50 @UKinUSA @UKinNewYork @ClarenceHouse