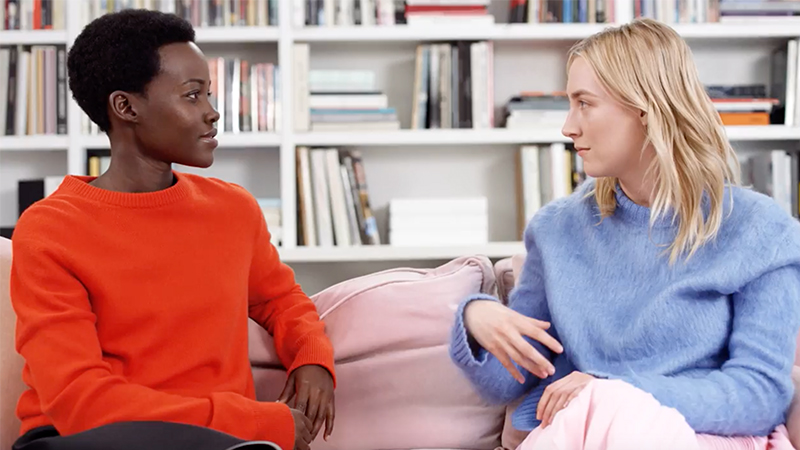 This week in fashion, MOGA vows to no longer use white models, Calvin Klien taps Lupita Nyong’o and Saoirse Ronan as the faces of its new fragrance while Sarah Paulson and Amanda Murphy are the new faces of Prada. Find these stories and more as we reveal this week’s top international fashion news.

Actress and Academy Award winner, Lupita Nyong’o will feature alongside Ladybird star, Saoirse Ronan in Clavin Klein’s latest fragrance campaign. Titled “Women”, this is the fashion house’s first perfume since Raf Simons took over as a chief creative officer and will drop on August the 15th.

The campaign will show Lupita and Saoirse as inspirational figures like Eartha Kitt, Katharine Hepburn, Sissy Spacek and Nina Simone. A TV commercial will be released later this year accompanying the print ad. The label has also spearheaded a social media campaign using the hashtag #IAmWoman. Fans are posting the hashtag alongside a picture of a woman who inspires them. Calvin Klein released a teaser of the campaign video on Instagram, check it out below.

With an all-female cast, the CALVIN KLEIN WOMEN #fragrance campaign champions iconic women of past generations and celebrates heroines of contemporary culture. Who are your women? ⠀⠀⠀⠀⠀⠀⠀⠀ See the full campaign at calvinklein.com/iamwomen. #IAMWOMEN #CALVINKLEIN

Titled Neon Dream, a snapshot of the campaign film was released on the fashion house’s Instagram earlier this week. It shows Amanda driving through a fictional Americana-inspired Las Vegas and walking down the infamous Sunset Strip. Sarah Paulson makes a series of mysterious appearances as different characters throughout the short film. The movie is also complete with a soundtrack by French music producer Frédéric Sanchez.

The one person that is always there, my watchful guide. Starring @mssarahcatharinepaulson in #PradaNeonDream. #PradaFW18 #Prada365 A film still from the campaign. See full film via link in bio. Photography @willyvanderperre Styling #OlivierRizzo Creative Direction @dja_dj

Burberry’s annual report has shown that they have incinerated more than US$13 million in beauty products and over US$24 million in ready-to-wear pieces. Even the high-end label’s prices such as their signature trench coats.

According to The Times, the label burnt the unwanted stock in a bid to maintain the label’s exclusivity. However, wastefulness appears to be a growing trend for Burberry whose waste value has risen 50% in two years. This is along with a six per cent increase since 2013. In fact, Burberry has destroyed more than $100 million worth of stock in the last five years. The British fashion house has responded to criticism by claiming it harnessed the energy generated from the burning clothing. Therefore making it more environmentally friendly. “Burberry has careful processes in place to minimise the amount of excess stock we produce,” the company said in a statement. “On the occasions when disposal of products is necessary, we do so in a responsible manner, and we continue to seek ways to reduce and revalue our waste.”

Italian luxury label, Bottega Veneta has announced that Daniel Lee will not be making his runway debut until next year. Lee took over as creative director earlier this year. However, we won’t get a glimpse of his next collection until February.

Sri Lankan headscarf label MOGA will no longer use Caucasian models in any of its advertising campaigns. The move comes as the label strives to promote more opportunities for racial and ethnic minorities. The label has launched a model search to find someone to represent them for the next 12 months. They are calling for women of all shapes, sizes and colours – except those who are white. MOGA stated in a press release; “We want to use the limited spacing we have in each of our campaigns to show races that are currently underrepresented in the media in an effort to promote racial diversity and more opportunities for ethnic minorities.”

You may know the accessories brand as the label who gifted its head scarfs to Pauline Hansons, only to have them returned by the politician. This is also not their first move for equality. In 2017 MOGA directed its online advertising towards Australia Day. A series of ads were made in response to growing negativity towards minorities and immigrants.  It showed four women from various backgrounds, with very different styles. Each woman styled a green and gold scarf in a way that embodies their own personal culture and style.