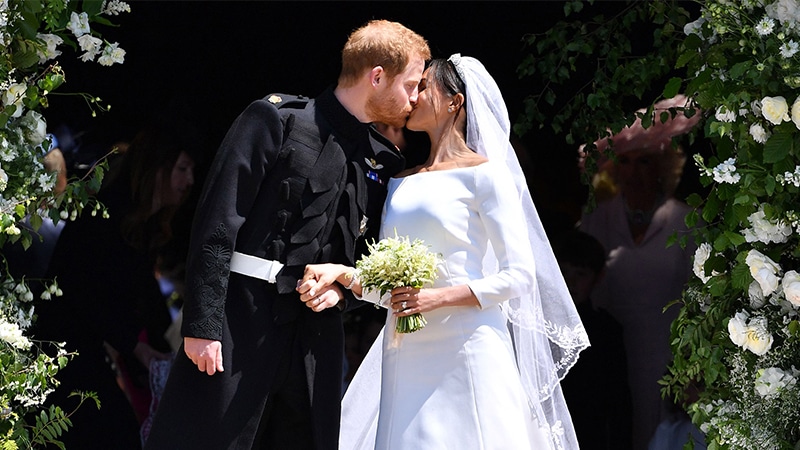 This week in fashion, Megan Markle and Prince Harry gave us the royal wedding of our dreams, fashion’s elite flocked to Sydney for Mercedes-Benz Fashion Week, and 88-year old Tippi Hedren is the face of Gucci’s latest campaign. Find these stories and more as we reveal this week’s top international fashion news.

In the most anticipated fashion moment of the year, Meghan Markle wed her prince at the royal wedding. The TV actress turned princess stunned the entire world in her gorgeous off the shoulder white gown. It featured long sleeves and a boat neckline and was designed by British designer, Clare Waight Keller for Givenchy. Markle wore a low bun and a diamond bandeau tiara, belonging to Queen Mary. Ms Waight Keller was appointed as the first female artistic director of French fashion house Givenchy last year. Markle chose to work with her because of “her timeless and elegant aesthetic, impeccable tailoring, and relaxed demeanour,” a Kensington Palace press release said. Meghan’s amazing extra long veil featured distinctive floral designs from all 53 countries in the commonwealth. It was five meters long and made from silk tulle with hand embroidered flowers.

For the royal reception, Meghan wore an equally stunning bespoke Stella McCartney gown. It featured silk crepe details, a high neckline and a flared skirt. The outfit change came as no surprise, especially considering Meghan’s now sister in law, Kate wore not one, but three dresses to her wedding.

The Duchess of Sussex's wedding dress has been designed by the acclaimed British designer, Clare Waight Keller. Ms. Waight Keller last year became the first female Artistic Director at the historic French fashion house Givenchy. Ms. Markle expressed the wish of having all 53 countries of the Commonwealth with her on her journey through the ceremony. Ms. Waight Keller designed a veil representing the distinctive flora of each Commonwealth country united in one spectacular floral composition #RoyalWedding

The who’s who of fashion flocked to Sydney this week for the 2018 Mercedes-Benz Fashion Week. The event as always drew Australia’s biggest bloggers, designers, magazine editors, models, stylists and influencers. It delivered endless street style inspiration as well as offered lucky industry professionals the opportunity to view the forthcoming resort collections of some of the country’s most prominent designers. As well as collections from international labels such as London-based designer, Emilia Wickstead.

Held at Carriageworks, the industry-exclusive event saw runways from notable designers such as Camilla and Marc who opened the 15th annual festival. While Camilla closed the festival with a runway, upcoming label I.AM.GIA showcased their forthcoming collection and surprised the crowd by debuting their first menswear range. The rotation also included established designers such as Bianca Spender, Michael Lo Sordo, Romance Was Born, Christopher Esber, Alice McCall, and Karla Spetic. There were also runways by emerging designers such as Blair Archibald, Deadly Ponies, Leo and Lin, Pereira Fitzgerald, with musicians Client Liaison presenting their first foray into fashion.

Muse to Alfred Hitchcock, Grandmother to Dakota Johnson and bona fide Hollywood royalty, Tippi Hedren is the face of Gucci’s new campaign. Fifty years since she graced our televisions and magazine covers as a model and actress, the 88-year-old is back as glamours as ever.

The ad for Gucci’s new range of jewellery and timepieces features Hedren as a mysterious fortune teller. Hedren is pictured reading a crystal ball and the palms of young models. She wears layered gold bangles and bracelets with the label’s signature snake inspired rings. She also wears a Gucci print dress designed by Alessandro Michele. The campaign is just the latest in an emerging trend of designers embracing age diversity. Calvin Klein featured 73-year old Lauren Hutton modelling their underwear last year, while Gucci has also cast Vanessa Redgrave in one of its cruise campaigns.

Cannes Film Festival has long been one of the most anticipated fashion events of the year. But this year’s 71st annual film festival has seen some very different fashion statements. Sixteen black actresses have taken a stand against racial inclusivity. All dressed in Balmain, the women stood united with French actress Aïssa Maïga to raise awareness for their project, “Noire N’est Pas Mon Metier” which means, “Black Is Not My Profession”.

The project aims to expose the discrimination faced by women of colour in the American and French entertainment industries. Olivier Rousteing of Balmain was approached by Maïga to create the outfits for the women. Rousteing agreed, stating that he “recognised the discrimination the women have faced and wanted to express his support for their project.” The likes of Nadège Beausson-Diagne, Mata Gabin, Maïmouna Gueye, Eye Haidara and Rachel Khan were also among the women. This follows Cate Blanchett who lead 82 women in a #Metoo protest at the festival earlier this week.

CANNES 2018 Balmain and #OlivierRousteing are proud to support all sixteen actors behind the compelling new book « Noire N’est Pas Mon Metier » (« Being Black Is Not My Profession ») by #AissaMaiga, as they mounted the legendary steps of #Cannes2018 wearing #BALMAIN last night. #NoireNestPasMonMetier #BALMAINARMY

Over 100 models have put their names on an open letter demanding an end to sexual misconduct. The latest step in the #metoo movement and part of the model alliance includes the likes of Doutzen Kroes, Edie Campbell, Milla Jovovich and Karen Elson. The New York-based organisation, The Model Alliance was founded in 2012 by Sara Ziff and has been advocating for model’s rights since. Launching the RESPECT Program on Wednesday, the alliance calls for fashion houses, media companies and model agencies to commit to “an orderly and fair process for addressing charges of abuse”, along with training and education initiatives.

The letter opens with “Over the past year, many courageous individuals have revealed the dark truth of sexual harassment in the fashion industry. These concerns have yet to be addressed in a meaningful and sustainable way. As models, our images serve commercial purposes, but our bodies remain ours.” Ziff says the fashion industry has yet to take action against a slew of sexual misconduct claims. The alliance proposes stronger, enforceable workplace standards to protect models including, prior agreements for underage models to pose nude, a secure complaints process and a neutral body to investigate complaints. Ziff hopes over the coming weeks, designers and brands will commit to these new standards.

Together, we will enable a working environment in which creative collaboration and self-expression flourishes — and everyone can work without fear of harassment or abuse. It’s #Time4RESPECT