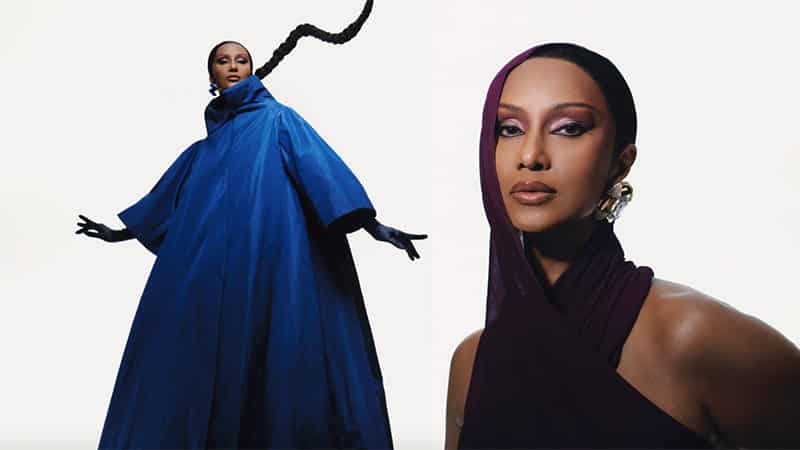 Iman stars on her first British Vogue cover, and Alexa Demie says goodbye to Balenciaga. Stay up to date with the top international fashion news of the week.

Supermodel Iman is the star of British Vogue’s January 2023 cover. The Somali model has been in the industry for more than 40 years, but this is the first time she has appeared in the publication. Wearing Norma Kamali, Sun Woo, and Richard Quinn, the campaign was photographed by Nadine Ijewere in the ‘60s and ‘70s-inspired shoot with bright colors against a clean, white background.

In the story, Iman discusses her experience as a Black woman in the modeling industry. Spotted by photographer Peter Beard, she created the Black Girls Coalition alongside Naomi Campbell and Bethany Hardison in the ‘80s. “I’m done with the seat at the table. Let’s just dismantle the whole table,” she said.

It appears that actress, Alexa Demie, is cutting ties with Balenciaga. The Euphoria star deleted all of her campaign photos from her Instagram. She also unfollowed the Spanish designer on the platform. She starred in several Balenciaga campaigns in recent months, wearing the label on red carpet events and appearing in their winter 2022 campaign. Despite the actions, no statement has confirmed the rumor.

Chairpeople Added to CFDA Board

The Council of Fashion Designers America is adding three new names to the Board. In its biannual board meeting, the CFDA named Prabang Grant, Aurora James, and Maria Cornejo to the Board. The decision was decided unanimously, naming them as vice chairs and secretary, respectively. Diane Von Furstenberg, Norma Kamala, Reed Krakoff, and Tracy Reese were all reelected as board members. This comes as Thom Browne was named as Chairman, replacing Tom Ford, who stepped down in May 2022.

A Look at Jacquemus’ SS23 Show

“We wanted to have a bit of fun with our brand,” said Simon Porte Jacquemus. Of the collection, the designer said he pictured “girls you imagine in Portofino and Capri, going around with their hats and earrings and polka dot pants.” The French designer pranked the fashion industry in the lead up to the show, sharing a cryptic post on Instagram before the show. “This is my last show,” it said on one slide. “Of the year,” read the next slide.