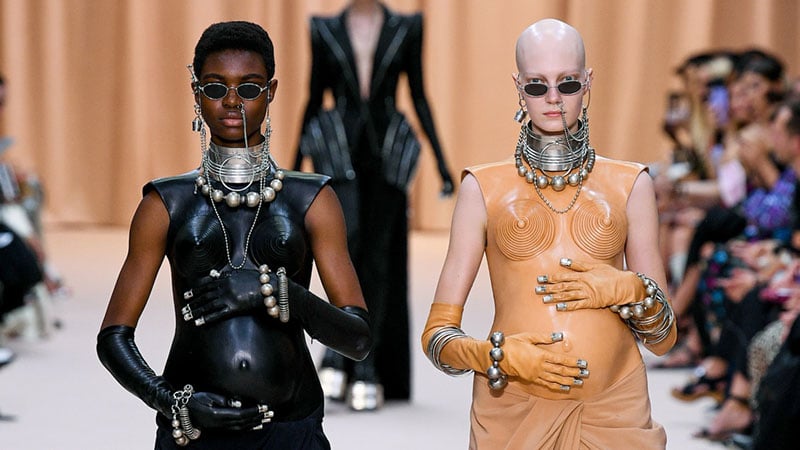 Olivier Rousteing goes viral with his JPG Couture collection, and celebrities strut on Balenciaga’s latest runway. Stay up to date with the latest international fashion news stories of the week.

The rumor mill is churning with reports of Tom Ford selling his namesake brand. A report from Bloomberg speculates that Tom Ford is talking to the firm Goldman Sachs to discuss finding a potential buyer. Tom Ford founded the brand in 2005 following his departure as Creative Director of Gucci, a role he held from 1990 to 2004. Moreover, he was the Creative Director of YSL from 1999 to 2004. The Tom Ford brand began as a menswear line but expanded into ready-to-wear, footwear, eyewear, perfume, and cosmetics. The report is not yet confirmed – Ford could remain within the business, and the label may remain independent. Watch this space.

It was a history-making moment in fashion this week, with Balmain’s Creative Director Olivier Rousteing debuting his collection for Jean Paul Gaultier (JPG) in Couture Fashion Week. This is the second iteration of JPG’s collaboration efforts, with the first created by Y/Project’s Glenn Martens. Rousteing’s collection celebrated the world of JPG, paying homage to some of the designer’s most iconic and scandalous moments.

Pieces inspired by JPG’s perfume bottles influenced the footwear, skirts, and shirts, with the bottle’s silhouette acting as the heel. Another major influence in the collection was a pinstripe dress with nude illusion cups over the breasts. This is a tribute to the dress that Madonna wore at the AIDS fundraising gala at amFAR in 1992. An array of blue striped ensembles, mixed prints, cone bras, and corsets donned the runway, all inspired by previous collections. There was also an injection of Rousteing’s iconic style, with an all-leather sculptural skirt and blazer set, with sharp shoulders and a matching beret.

Balenciaga went viral with its show at Couture Fashion Week, as celebrities mixed with models along the runway. The collection featured Nicole Kidman, Dua Lipa, Christine Quinn, and Kim Kardashian, who wore asymmetrical gowns with flowing fabric. Pieces on the runway included plenty of morph suits, a staple for the Balenciaga brand for a few years, counterbalanced with oversized coats and textured gowns.

Naomi Campbell and Bella Hadid also walked for the show. The latter wore a green dress heavily influenced by Balenciaga’s couture Amphora gown, designed by Christobel Balenciaga in 1959. The gown was modernized with a mini skirt in the back, black opera gloves, and black heels. Naomi Campbell wore an oversized black ball gown with a huge skirt and a round neckline – the gown was so large that many models struggled to get through the threshold to the runway.

“This is a deeply personal collection because it’s all about the history of Valentino,” said Piccioli of the collection before its showing. In addition to the collection, the Creative Director invited 120 students from Rome’s fashion schools to attend the runway. “I still remember so well the feeling of being at the periphery of such an awe-inspiring event,” he said. “I wanted them to sit and watch the show, and not be left outside [in] the crush.”

The latest collection from Ivy Park is here, and supermodels from past and present are fronting the campaign. Beyonce’s athleisure brand is releasing its latest collection with Adidas, dubbed Ivytopia. Models such as Irina Shayk, Adut Akech, and Joan Smalls fronted the campaign, playing in the futuristic Ivy Park garden.

The collection features 52 gender-neutral pieces, footwear, and accessories in neutral shades like khaki, cream, black and white, which aims to present ‘natural and organic elements with futuristic details and shapes.’ The collection will be available for purchase online and in-store from July 21.