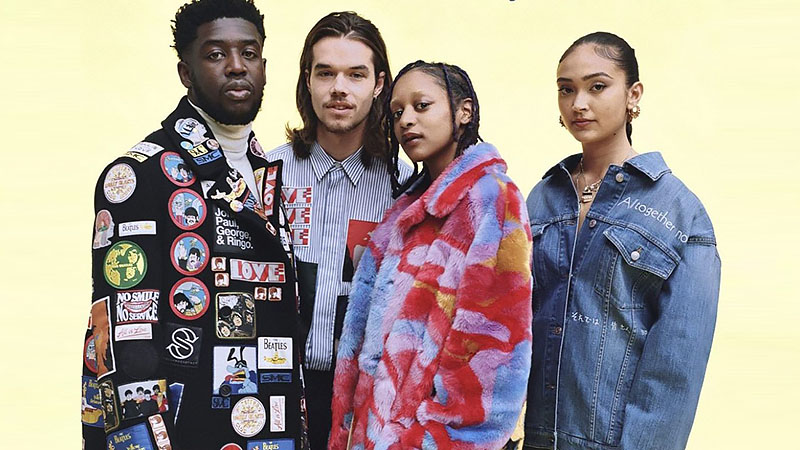 This week in fashion, Lady Gaga launches her makeup line, and Off-White is sued for copyright infringement. Discover these stories and more as we uncover the top international fashion news of the week.

Lady Gaga is launching her first makeup brand, Haus Laboratories. The line will be sold exclusively on Amazon. One of the collections, Glam Attack, features six items, including lip liner and lip gloss, eyeshadow and an eye pencil.

Gaga announced the launch on Instagram and explained her reason for starting it. “When I was young, I never felt beautiful. And as I struggled to find a sense of both inner and outer beauty, I discovered the power of makeup. I’ve come to accept that I discovered my beauty by having the ability to invent myself and transform. They said I was just weird, but really, I was just Born This Way,” the statement read. Haus Laboratories will release in September.

When I was young, I never felt beautiful. And as I struggled to find a sense of both inner and outer beauty, I discovered the power of makeup. I remember watching my mother put her makeup on every morning, basking in the glow of her power to put on her bravest face as the hard working woman she was. I then began to experiment with makeup as a way to make my dreams of being as strong as my mother become true. It was then that I invented Lady Gaga. I found the superhero within me by looking in the mirror and seeing who I wanted to be. Sometimes beauty doesn't come naturally from within. But I'm so grateful that makeup inspired a bravery in me I didn't know I had. I've come to accept that I discovered my beauty by having the ability to invent myself and transform. They said I was just weird, but really, I was just Born This Way. Love, Lady Gaga

Virgil Abloh’s label, Off-White, is being sued by creative agency, OffWhite Co, for copyright infringement. The agency said it has ‘publicly done business as ‘OffWhite’ since the late 1990s’, working with brands such as Coca-Cola and IBM. In a statement made by the agency, the designer’s name is too confusing and is ‘effectively dooming [OffWhite Productions’] ability to make use of, develop and enjoy the benefits of its brand,’. Christopher Kelly, Chair of Trademark Practice at Wiley Rein LLP said, “If these parties operated in the same space, sold to the same consumers, and had a more compelling relatedness, this would be a very different case.”

Virgil Abloh's brand @off____white has been hit with an infringement suit by a creative agency of the same name. ⁣⁣ ⁣⁣ OffWhite Co. claims the branding of veers too close to its own, muddying even its hashtag game. ⁣⁣ ⁣⁣ The suit raises some increasingly common trademark issues arising from social media marketing, though it doesn’t quite involve direct fashion industry competitors. ⁣⁣ ⁣⁣ “If these parties operated in the same space, sold to the same consumers, and had a more compelling relatedness, this would be a very different case,” said Christopher Kelly, chair of the trademark practice at Wiley Rein LLP. ⁣⁣ ⁣⁣ Tap the link in bio for more. ⁣⁣ ⁣⁣ Report: Sindhu Sundar ⁣⁣ .⁣⁣ .⁣⁣ .⁣⁣ .⁣⁣ .⁣⁣ #wwdmedia⁣⁣ #offwhite⁣⁣ #virgilabloh

Idris Elba is dropping a unisex fashion line, 2HR Set, it is inspired by his passion for music and the DJ culture. The collection includes hoodies, sweats, long-sleeve ad crew-neck T-shirts and other basics. 2HR Set features collaborative styling from DJs like Fatboy Slim, and will soon include other collabs with artists and musicians that love Elba.

The inspiration stems from his love and passion for music. “A two-hour set is the acid test for a DJ. But for me, I’ve taken this idea a step further. Whether I’m behind the decks on stage, in the gym, or studying a new script, I’ll give myself two hours and really get stuff done. It’s my window to go for it, get it done, and get it done well,” he explained. 2HR Set is available for purchase.

*GIVEAWAY* GET YOUR HANDS ON THE 2HR SET x FATBOY SLIM HOODIE FOR FREE The rules are simple: 1. Give us a ? and tag a friend that loves music as much as you do 2. Make sure you both follow @2hrset Sometime next week we'll pick a winner and send you both an exclusive hoodie FOR FREE. Good luck!

Stella McCartney is releasing a collection, All Together Now. It takes inspiration from the Beatles’ 1968 psychedelic film, Yellow Submarine and is based on the song with the same name. The film celebrated its 50th anniversary in 2018, and Ms McCartney was inspired to create a line dedicated to her father’s legacy. “It’s shockingly modern, what those four young guys did. The beauty of the lyrics blows me away,” she said. The collection includes shirts, coats and bags, and is available for purchase online.

Introducing ?… ‘All Together Now’! Bringing the fun, fantasy and psychedelia of The Beatles’ iconic film ‘Yellow Submarine’ back to life and sharing its message of peace, love and togetherness with a new generation. #StellaMcCartneyxTheBeatles⁣ ⁣ Watch the full campaign film, starring musical talents @KeyahBlu, @OscJerome, @JoyCrookes and @femiondrums, on #StellasWorld now.⁣ ⁣ #StellaMcCartney #TheBeatles #YellowSubmarine