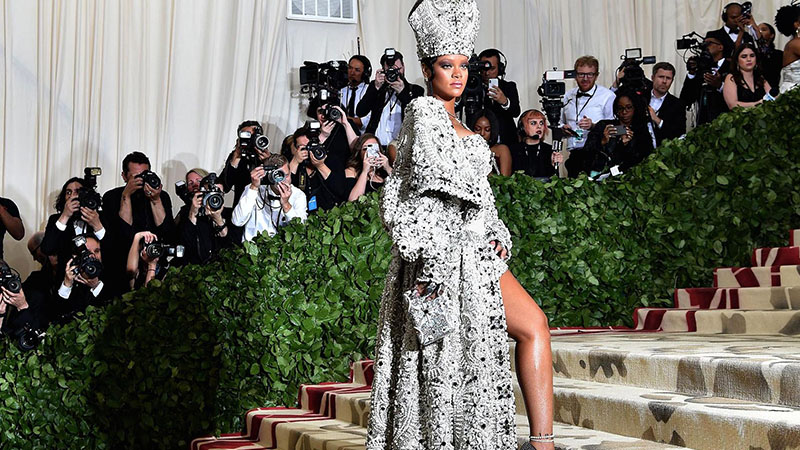 This week in fashion, celebrities frocked up in their Sunday best for the 2018 Met Gala, Kim Kardashian will receive the first-ever CFDA Influencer Award, and another Aussie fashion label collapses. Find these stories and more as we reveal this week’s top international fashion news.

In case you weren’t already been clued in by the Instagram flood of celebs donning outlandish looks, the Metropolitan Museum of Art’s Costume Institute Gala (otherwise known as the Met Gala) went down this week. Despite the Met Gala religiously being held on the first Monday in May, this year guests were asked to dress in their Sunday’s best.

The theme celebrated the Costume Institute’s new exhibit Heavenly Bodies: Fashion and the Catholic Imagination, curated by Andrew Bolton. This year the event was hosted by Rihanna, Amal Clooney, Donatella Versace, Anna Wintour, and Stephen and Christine Schwartzman. With everything from simple halos and embellished crosses, sexy nuns, Joan of arks and full-blown popes the looks did not disappoint. But special mentions go to Blake Lively, Rhianna, Ariana Grande and Cardi B.

Practically inventing the concept of being an influencer, it is only fitting that Kim Kardashian should receive the first ever influencer award. The Council of Fashion Designers of America, inc.’s (CFDA) Announced the reality star, beauty and fashion mogul and app invertor would receive the newly established accolade at this year’s awards ceremony.

The idea to create the award and bestow it to Kim K came from none other than Tommy Hilfiger. During an interview with WWD, President and chief executive officer of the CFDA, Steven Kolb, stated “Tommy Hilfiger said, ‘If you think about influencers and how they’ve changed our industry, I think we should acknowledge that’” Kolb told WWD. “[The board] all agreed that Kim was someone who has really impacted the industry and has changed the way brands are presented. She’s a friend of a lot of the designers and has had great influence on fashion globally.” Kim expressed her excitement about the honour by retweeting the announcement and adding “OMG OMG OMG ???.”

Exclusive: @kimkardashian is going to be the first-ever recipient of the @cfda Influencer Award. According to CFDA president and CEO Steven Kolb, it was @thomasjhilfiger’s idea during the board meeting to decide the recipients of this year’s special honors. “If you think about influencers and how they’ve changed our industry, I think we should acknowledge that,” Hilfiger told Kolb. The CFDA ceremony will take place on June 4 #wwdnews #wwdfashion (?: @rainerhosch)

Elyse Knowles is The New Face of Seafolly

Since booming onto the Aussie social scene following her season on the Block, Elyse Knowles seems to have taken over the country. And now, being appointed the new face of Seafolly, she shows no signs of slowing down. She joins the ranks of iconic Seafolly faces including GiGi Hadid, Miranda Kerr, Jessica Hart and Shanina Shaik.

This is just the latest in the line up of impressive accomplishments the 24-year-old has already added to her resume. These feats include being appointed the face of Myer Beauty, winning the 2017 season of The Block and being the face of 2016 Caulfield Cup Carnival.

Move over sunshine! Elyse Knowles is here to turn up the heat with salt in her hair and sand on her feet, one swimsuit at a time. We are thrilled to officially welcome @elyse.knowles to the Seafolly family as she fronts the new global campaign and steps into the brand ambassador role to represent the Seafolly way of life. Her good natured spirit and passion for living the iconic Australian beach lifestyle is what we love about the gorgeous Australian bombshell, and it was only natural for us to celebrate the obvious synergies between Elyse and Seafolly, and have her share the Seafolly spirit with women all over the world. Welcome to Seafolly, Elyse! Shop the first new arrival, La Belle, as seen on Elyse. #elyseforseafolly

H&M have gifted us affordable glamour in the form a Met Gala inspired line of dresses. The range will reference the custom H&M designs seen at the event worn by the likes of Lili Reinhart, Olivia Munn and Alek Wek. Dupped, The Gala Collection, it runs with the Heavenly Bodies theme. It features four red carpet looks in varying lengths, donning metallic beading and sequins. There are also plenty of ruffles, metallic colours and shimmery details.

H&M are no strangers to the Met Gala. In fact, this is the fourth year in a row the Swedish retailer has sponsored a table at the prestigious event. Previous years have seen the brand dress the likes of Nicki Minaj, Ashley Graham, Odell Beckham Jr and Janelle Monáe. The collection has yet to land in the Australian, however, is available online across the globe. So this could be your chance to nab a red carpet ready gown, at a more affordable price.

Another Aussie Label Bites the Dust as Metalicus Collapses

After becoming popular in the 90’s for its stretch nylon basics in bold colours, Metalicus has entered voluntary administration. Once having over 350 stockists across Australia, New Zealand, South Africa and Canada, Metalicus now only has 12 retail stores, 15 Myer concessions and an online store. The management behind the label announced this week they will be permanently closing the doors to their remaining stores.

The General Pants Co. owned label announced its closure via an email sent to consumers on Wednesday. The email read: “Metalicus has long been recognised as an iconic Australian fashion brand and we would like to take this opportunity to thank our customers for their ongoing loyalty and support over the years.” This could indicate sad times ahead for Australian retail with Metalicus being the second label to collapse within a week. US-based Esprit announced it was closing its Australian operation. Metalicus’ website began closing down on Thursday offering discounts of up to 50 percent.