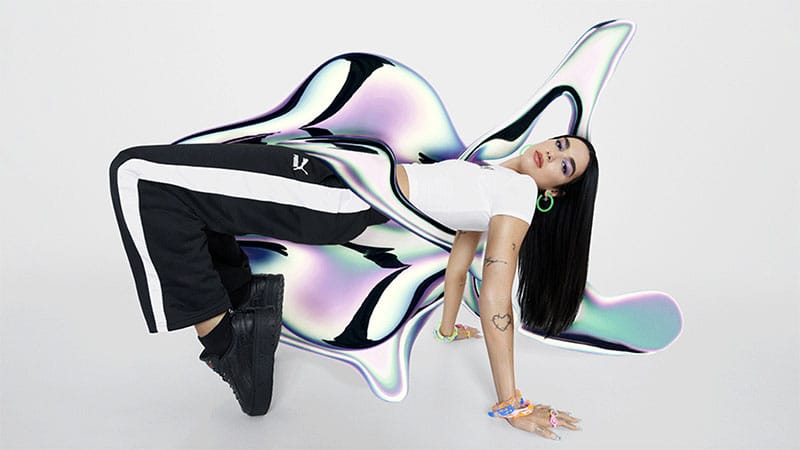 Chanel’s advent calendar causes a stir, and Dua Lipa collaborates with Puma. Find these stories and more as we uncover the top international fashion news of the week.

The World Reacts to New Sex and the City Reboot

The long-awaited Sex and the City reboot, “And Just Like That…”, has finally aired. The series re-enters the world of Carrie Bradshaw and her group of friends as they navigate life in their 50s. Much-loved for its fashion and distinctive styling, the show was formally styled by Costume Designer Patricia Field. She famously styled Carrie in the iconic pink tutu, John Galliano’s newspaper dress for Christian Dior, and many others.

In the first few episodes, the cast wear pieces from Oscar De La Renta, Dries Van Noten, and Manolo Blahnik. Costume designers Molly Rogers and Danny Santiago explained their thought process behind the styling. “What we brought in new was just updating it. Making it more modern. Working with new designers, new young designers, internationally,” said Santiago. “Because of Instagram, we were able to find all these new people that we could bring in. But again, sticking to what the girls had already as far as their types of looks.”

Chanel’s first advent calendar has gone viral for all the wrong reasons. The Christmas gift, which celebrates the 100th anniversary of Chanel No.5, was released for $825 and featured a series of gifts and collectibles from the designer. Chanel advertised the advent calendar as “a calendar unlike any other,” featuring 27 products, including “a full-sized fragrance or makeup product, a miniature or another surprise marked with Gabrielle Chanel’s lucky number,” the website read.

Customers who bought the expensive gift went on TikTok to share the goodies inside but were left disappointed when they received stickers, a plastic logo bracelet, and an empty dustbag with the Chanel logo. “This has to be a joke! Stickers,” said Elise Harmon, creator of the video, which has since received more than 17 million views. The designer has received severe backlash for the gift, prompting a response from the designer. “We are aware of the comments that are currently visible under our publications and are sorry that this calendar may have disappointed some people,” said the brand.

Pantone Unveils Color of the Year

The Pantone Color of the Year 2022 is here – 17-3938 Very Peri. The periwinkle blue shade is new to the brand and encourages ‘personal inventiveness and creativity.’ “As we move into a world of unprecedented change, the selection of Pantone 17-3938 Very Peri brings a novel perspective and vision of the trusted and beloved blue color family,” said Pantone Executive Director Leatrice Eisemen. “Encompassing the qualities of the blues, yet at the same time possessing a violet-red undertone, Pantone 17-3938 Very Peri displays a spritely, joyous attitude and dynamic presence that encourages courageous creativity and imaginative expression.”

Dua Lipa is Collaborating with Puma on Capsule Collection

Dua Lipa is releasing a collection with Puma. The butterfly-themed capsule is dubbed ‘Flutur’ – the Albanian word for ‘butterfly’ – and pays homage to the ’90s sportswear scene and a symbol of metamorphosis. The collaboration includes baby tees, a hoodie, footwear, and other apparel, featuring a butterfly motif and Puma’s logo. “For me, butterflies are more than just beautiful creatures; they represent so much, like transformation, hope, and metamorphosis,” said Dua Lipa. “Over the past year, the butterfly has become especially symbolic and meaningful to me. I chose [the name ‘Flutur’] to pay homage to my heritage while also celebrating this new beginning with Puma.” More details of the collaboration will drop in 2022.

Edward Enninful is Penning a Memoir

Edward Enninful, the Editor-in-Chief of British Vogue, is releasing his memoir. The British editor shared the news on Instagram, explaining how the pandemic inspired him to begin writing. With more than three decades in the fashion industry, he has worked his way from a male model to a fashion editor. “I wanted to share my own experiences from childhood to the offices of Vogue, and show how anyone can make change in the world, with a little passion, perseverance, and a pure heart,” he said.