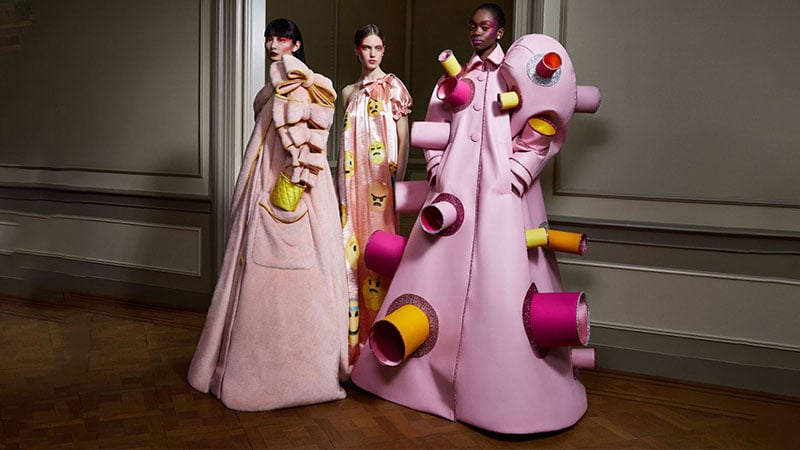 Digital Couture Fashion Week debuted online, and Lady Gaga is the new face for Valentino. Find these stories and more as we uncover the top international fashion news of the week.

Couture Fashion Week has begun online. The two-day event featured a wide range of designers, including Chanel, Viktor & Rolf, and Balmain. The latter’s Creative Director, Olivier Rousteing, used TikTok to showcase the collection along the River Seine – although technical issues prevented the full stream. Chanel found inspiration from the late Karl Lagerfeld and his party days from the ’80s.

Louis Vuitton is no longer sticking to the regularly scheduled program for menswear, and switching to a seasonless model. In a recent announcement, Virgil Abloh explained that the label would showcase a physical show in Shanghai on August 6th, with Tokyo set to follow.

“We’re getting rid of the straitjacket the industry has been operating under,” Abloh said. This seasonless approach has become more popular amongst large fashion houses, including Gucci, who made the same move in May. This is ‘a new system’ for the designer, who wants to remove the brand from the status quo.

⁣ the past 4 months of doing perceivably doing nothing gave me a lot of time to think. 𝓛𝓸𝓾𝓲𝓼 𝓥𝓾𝓲𝓽𝓽𝓸𝓷 or Off-White™ are the concept cars. it’s the pinnicale place to place my most forward ideas. ⁣⁣ ⁣⁣ the film released yesterday is a fashion week offering is a prequel of things to come. it’s a messages at surface level but it’s the nuance that foreshadows the future which is the most important part. it describes my start at the house with my motley crew of characters that make up my team. starting from the literal home of Mr. Louis Vuitton where the film starts to my “home office” on Pont Neuf, then eventually elsewhere.⁣⁣ ⁣⁣ all seasons i’ve done at LV now collapse in to one, one-long-season, a continual story. the newest isn’t necessarily the most valuable just because it’s “new”. it also allows the narrative between seasons to be the foundation, not just the event of another fashion show. ⁣⁣ as the creative head of my studio this film features esteemed black talent. Sa-Ra, REGGIE KNOW, Kamasi Washington, Black Anime and Ibrahim Karma each amplify my vision and showcase the creative impact diversity can have in all industries. ⁣⁣ that WWD article lays out the vision in detail, but in short i’ve crafted a new system that abides by my whole new logic about fashion, fashion shows etc. that article spells it out further. ⁣⁣ ⁣⁣ on that note “Stay there, well come to you…”⁣⁣ ⁣⁣ film titled “Message in a Bottle” directed by @virgilabloh⁣⁣ c/o @louisvuitton ⁣⁣ illustrations REGGIKNOW @fashionfigureinc⁣⁣ ⁣⁣ animation BLACK ANIME @BLACKANIMEX⁣⁣ ⁣⁣ music SA-RA @SaRaCreativePartnersinfo @TazArnold @ShafiqHusayn @OmmasKeith @KamasiWashington @ThunderCatmusic @TerranceMartin⁣⁣ ⁣⁣ music director @_BenjiB⁣⁣ ⁣⁣ production⁣⁣ @PlayLabInc & @Beg00dStudios⁣⁣ ⁣⁣ ⁣⁣ ⁣⁣

Tommy Hilfiger is launching a new platform, The People’s Place. This new initiative aims to advance the representation of Black, Indigenous, and people of color (BIPOC) within the fashion industry. “What is happening to Black communities in the U.S. and around the world has no place in our society,” said Hilfiger. The first part of the platform includes a minimum commitment of $5 million per year for funding over the next three years.

“The fact that it has continued to exist in our industry is unacceptable. We are far behind where we should be in achieving diverse representation. It shouldn’t have taken us this long to acknowledge that, but we are determined and committed to changing it going forward. We will be intentional, fearless, and unwavering in the actions we take. Through the People’s Place Program, we will use our platform to create opportunities and stand up for what is right,” Hilfiger explained.

Today we are launching the People’s Place Program, which will seek to advance the representation of black, indigenous and people of color (BIPOC) within the fashion and creative industries.⁣ ⁣ Centering around Partnerships, Career Access and Industry Leadership, an initial minimum commitment of $5 million in annual funding will be made for the next three years.⁣ ⁣ “What is happening to Black communities in the US and around the world has no place in our society. The fact that it has continued to exist in our industry – overtly and systemically – is unacceptable. We are far behind where we should be in achieving diverse representation. It shouldn’t have taken us this long to acknowledge that, but we are determined and committed to changing it going forward. We will be intentional, fearless and unwavering in the actions we take. Through the People’s Place Program, we will use our platform to create opportunities and stand up for what is right.” – @thomasjhilfiger⁣ ⁣ The program takes its name from Tommy Hilfiger’s first store which opened in 1969 in his hometown of Elmira, New York. At only 18 years old, Tommy created the People’s Place as a dedicated space for people from all walks of life to come together to enjoy art, music, fashion and pop culture. Shaped by the cultural revolution of the 1960s, the original store fostered an exchange of ideas, encouraged authentic self-expression and challenged social norms.⁣ ⁣ It is in this spirit that the new People’s Place Program has been founded and will continue to expand.⁣ ⁣ The program journey starts now, and we will keep you updated as this program evolves. ❤️⁣ ⁣ Photo: Larry Stemerman, Peoples Place partner and co-founder, circa 1970

“Artists from our community have come together to create a festival that is truly global — using technology and social media to bring the mosh pit onto your mobile,” said McCartney. “While I was sad not to see Dad and all the other great performers at Glastonbury this year, we have put together an incredible lineup and are raising our voices to end violence against women, a cause more urgent now than ever.”

Rock out at #Stellafest, a four-day digital festival featuring a global lineup of singers and other artists – coming together to stop violence against women! Experience daily performances on our Instagram Main Stage and bid in our @Mastercard charity auction in support of @NNEDV, including prizes from #StellaMcCartney, @AliciaKeys, @Kelis and more. Launching tomorrow at Priceless.com/Stellafest.⁣ ⁣ Plus, catch exclusive performances on our TikTok (@StellaMcCartney) – with more special guests announced daily!⁣ ⁣ #Stellavision #StellaCommUnity #TikTok

Lady Gaga is the New Face for Valentino

Lady Gaga is the new face for Maison Valentino’s perfume. The fragrance is called Voce Viva and is a genderless scent that is meant to celebrate everyone’s unique voice, style, and self. “Lady Gaga means freedom, self-consciousness, pure heart,” said Pierpaolo Piccioli, the Creative Director of Maison Valentino. “Her participation in this campaign elevates the symbolic power of the project to the highest level.” The new fragrance will debut in September.

#ValentinoVoceViva Vibrant, emotional, couture. @ladygaga is announced as the face of Valentino Voce Viva, the new fragrance welcoming a spirit of freedom and difference, ideals shared by both Gaga and Pierpaolo Piccioli.