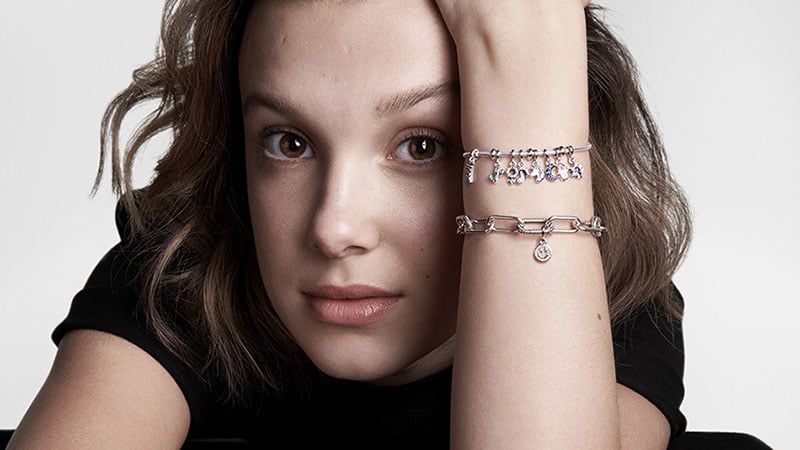 This week in fashion, Millie Bobby Brown is the face of Pandora and Iman will receive the Franca Sozzani Award. Find these stories and more as we uncover the top international fashion news of the week.

Actress and model, Millie Bobby Brown is the new ambassador of Pandora. For the next two years, she will be the face of the jewellery brand and will front its latest campaign. The shoot includes soft lights, quirky poses and celebrates ‘self-expression’. “I love Pandora because everyone can tell their own story, and each symbol can represent your individuality,” Bobby Brown said. The brand’s video unveils in October.

Pandora, which is now the biggest jewellery brand in the world, has signed a two-year contract with Stranger Things actress Millie Bobby Brown, who will become an ambassador for Pandora from October 2019 ? . . . . . . . #retail #pandora #milliebobbybrown #strangerthings #collaboration #jewellery #branding #brand #marketing #brandambassador #ambassador

Lauren Hutton is the first celebrity ambassador for StriVectin. Almost 50 years after signing the first exclusive modelling contract with Revlon, she’s returning to the industry to prove that you can be ‘beautiful at all ages’. She began her career in the ’60s and is considered one of the most successful models of her time, alongside Twiggy and Jean Shrimpton. The campaign includes the model in empowering clothes, with slogans such as ‘Beauty is As Beauty Does’ and ‘Confident’. Ms Hutton considers this campaign as one of the proudest of her career. “I said coming back [to fashion] at 46 or 47 was the thing I’m proudest of, but it makes me awful proud to come back at 75,” she said.

Meet our #SuperRoleModel, global brand ambassador and endless source of inspiration: Lauren Hutton. She’s an icon that breaks molds, blazes trails, and plays by her own rules, making her the perfect partner to relaunch our iconic formula, the NEW SD Advanced™ PLUS Intensive Moisturizing Concentrate. #BeautyInAllAges

Supermodel, Iman, is set to receive the Franca Sozzani Award in Venice. Iman is the third recipient of the award, which recognises women who stand out for their artistic accomplishments as well as outstanding social work. Iman created a skincare line for women of colour and has been a part of the Children’s Defense Fund for many years. Other winners include Salma Hayek and Julianne Moore.

“Iman’s work has disrupted the fashion industry in a way similar to Franca’s: bold, innovative and inclusive,” said Francesco Carrozzini, who established the award. “Using her platform to the best of its potential, Iman’s work from lobbying the CFDA for an increase of diversity on the runway to impactful humanitarian work displays her true passion and focus. We are truly honoured for her to accept the Franca Sozzani Award.” The ceremony takes place in Venice on August 27th.

New York style icon, Iris Apfel is having her work celebrated in the Peabody Essex Museum. The artist, designer and model is celebrating her 98th birthday in August. “For people who don’t know her well, that is one of the things that people admire. Isn’t she great continuing to do this at her age? But for people who know her, age is not a factor. This is just who she has always been. That’s the part that is inspiring. She is not letting the number of years that she has been on the planet slow her down in any way,” said Petra Slinkard, The Nancy B. Putnam Curator of Fashion and Textiles.

“One thing that Iris really symbolizes is that she is a very forward-thinking, very brave individual when it comes to design and style and pushing the boundaries.” – curator @pslinks in @wwd. Check our "News" story highlight to read the full piece. ☝️ We're unveiling the new Iris and Carl Apfel Gallery in our new wing this September! #newPEM #PEMfashionandtextiles #IrisApfel @iris.apfel

Victoria’s Secret has reportedly hired its first transgender model, Valentina Sampaio. The model posted behind-the-scenes snaps from a VS shoot and tagged ‘PINK’ in her caption – PINK is VS’ sister brand. Alex Schmider, the GLAAD Associate Director of Transgender Representation, said: “Valentina Sampaio has a major opportunity to send an uplifting and affirming message to transgender women around the world that they belong and show that inclusion is what’s best for brands today.” The lingerie company is yet to confirm the casting.