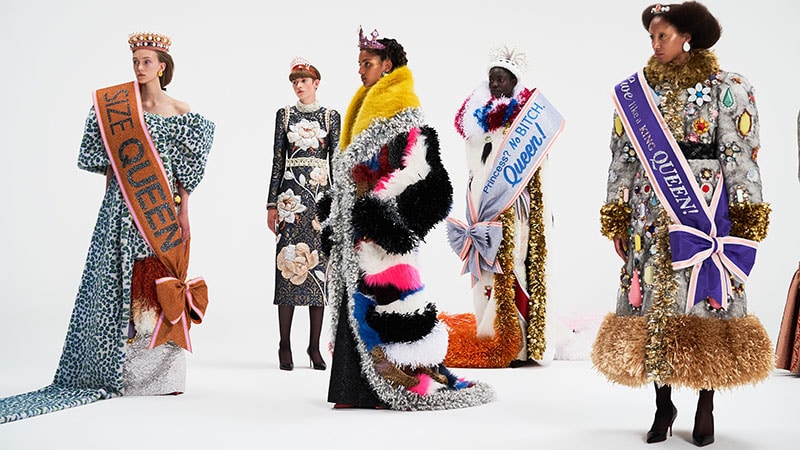 Haute Couture Fashion Week is back, Selena Gomes launches a swimwear collection, and the first image of the Sex and the City reboot has arrived. Here are some of the biggest international fashion news stories of the week.

Paris Haute Couture Fashion Week is back and better than ever. The highly-anticipated fashion event featured couture collections from Fendi, Schiappereli, Viktor & Rolf, and many more. Much-loved brands like Chanel, Dior, and Giorgio Armani Privé made their return, while Balenciaga debuted after more than 50 years. The fashion house turned to its roots with the craft and atmosphere of the event, showing it in the Founder’s original salon in Paris. “couture is the highest level of garment construction, that is not only relevant in today’s mass-productive industry but even absolutely necessary for the survival and further evolution of modern fashion,” explained Artistic Director, Demna Gvesalia.

Dutch designer, Iris Van Herpen, took to the skies for her Couture collection titled ‘Earthrise’. The designer collaborated with world champion skydiver Domitille Kiger, who launched herself out of a plane in one of the garments. Viktor & Rolf took its inspiration from queens, with giant ruffles, delicate embroidery, oversized jewels, and crowns. “This season, Viktor & Rolf wanted to show how everyone can become a Queen and how everyone can behave like royalty,” the brand said.

Selena Gomez is launching her own swimwear collection in collaboration with La’Mariette. The capsule includes six designs, two bikinis, a one-piece, and a sarong. The campaign features the actress and singer and isn’t retouched. “So grateful that I get the opportunity to celebrate my friends’ endeavors. My collaboration with @lamariette is out today!” shared Gomez. “What I love about this brand is that it celebrates women who love their bodies unconditionally, giving themselves the grace they deserve. Hope you love it as much as I do.” The collection is available for purchase online.

The Karl Lagerfeld brand is collaborating with Kenneth Ize – the exclusive gender-neutral capsule features the signature black and white palette, but with a Nigerian and European twist. “Gender is a construct, and there really is no reason why more collections can’t encompass this all-inclusive approach,” said Ize. “It doesn’t matter what gender you identify with – it’s how you express yourself that’s important, and I think this collection allows for endless possibilities in that respect.”

The collection features tailored striped pants, diamond print skirts, knitwear, and blazers. They’re crafted using Italian hemp material and intricately weaved bags. “When seeing Kenneth’s runway, it’s something that struck me. Everything feels interchangeable. I liked the idea of a shared wardrobe, and we all thought it would make complete sense to build this capsule as a unisex collection,” explained Carine Hun Kim, the Design Director of Maison Karl Lagerfeld. “I’m sure Karl would have loved Kenneth’s work.”

Here’s the First Look at Sex & the City Reboot

The first photo from the Sex and the City reboot – And Just like That – is finally here. The campaign shot was shared on Instagram by the three returning stars, Sarah Jessica Parker, Cynthia Nixon, and Kristin Davis. “Together again. 💜Read through our first episodes. @justlikethatmax” shared Parker online. “Alongside all the fellas and our newest cast members. Like an ice cream sundae.” The reboot will follow the three returning cast members “as they navigate the journey from the complicated reality of life in their 30s to the even more complicated reality of life and friendship in their 50s.”

The released image shows the three women walking down the streets of NYC in a similar fashion to the original series, however, without the guidance of Patricia Field. True to its roots, the image was dripping in designer pieces, including Miranda (Nixon) in Vice, Charlotte (Davis) donning Carolina Herrera and Dior, and Carrie (Parker) in Norma Kamai, Celine, and Fry Powers. The reboot will launch exclusively on HBO Max.