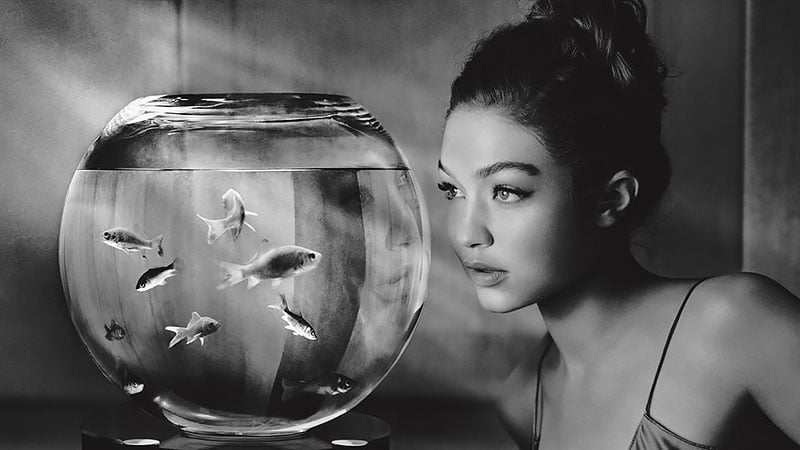 This week in fashion, Balmain debuts a brand new logo, Marc Jacobs is launching a new label, Gigi Hadid features in the 2019 Pirelli Calendar and Australian label Tigerlily is launching jewellery. Find these stories and more as we reveal the top international fashion news of this week.

Chanel has announced that it plans to stop using exotic animal skins ahead of its Pre-Fall 2019 Métiers d’Art show in New York’s Metropolitan Museum of Art. The exotic skins which will be banned include lizard, crocodile, stingray, snake and fur, of which Chanel uses very little. The decision came down to the fact that it is becoming increasingly difficult to source skins that meet the house’s ethical and quality standards. “There is a problem of supply and that was not Chanel’s business anyway,” Bruno Pavlovski, president of Chanel fashion and of Chanel SAS said. “We did it because it’s in the air, but it’s not an air people imposed to us. It’s a free choice.”

The brand’s attention will shift to the research and development of materials and leathers generated by “agri-food” industries. “The future of high-end products will come from the know-how of what our atelier is able to do,” Pavlovsky said. Chanel is the first luxury brand to join labels including Nike, Puma, Asos, H&M, Arcadia Group and L Brands, which have already banned exotic skins from their product offering. The likes of Coach, Michael Kors, Armani, Gucci, Versace, Burberry and John Galliano have pledged to halt the use of fur, however, they have not made the leap to include skins.

Details of the 2018/19 #CHANELMetiersdArt collection showcase the know-how of the Maisons d’art in a perpetual creative dialogue with Karl Lagerfeld, including gold and scarab beetle adornments by #Montex. #CHANELinNYC #CHANEL @michelle_gtk @naomichinwing @sarahdahl @tamiwilliamsofficial @anokyai

Balmain has a new logo, created by creative director Olivier Rousteing. The logo weaves together a B and a P as one single letter, a reference to Pierre Balmain – the brand’s eponymous founder. Rousteing, who has been at the brand’s creative helm for eight years, said that the new logo better represents the label today, while still respecting its past. “I’m not about to tear down traditions or break rules simply for the sake of breaking them,” said Rousteing in a statement. “But times do change. Balmain is now a fast-growing brand relying on new media to communicate to a global audience.”

The new ‘B’ is also reflective of Pierre Balmain’s mid-century designs. Rousteing added that it was important that the logo expressed Balmain’s history because “in order to move forward, you must first be clear about where it is that you’re coming from.”

The 2019 Pirelli calendar has been revealed, this year starring four women – Gigi Hadid, Laetitia Casta, Misty Copeland and Astrid Eika – each one pursuing her passions and dreams. The images were shot by renowned photographer Albert Watson, in both New York and Miami. “I wanted to create something that was more than just a portrait of somebody,” he said. “I wanted it to look like a film still. I wanted people looking at the Calendar to see that my aim was photography in its purest form, exploring the women I was photographing and creating a situation that would convey a positive vision of women today.”

2019 Pirelli Calendar by the one and only @albertwatsonphotography

Marc Jacobs will introduce an affordable new line for Pre-Fall 2019. Jacobs’ ready-to-wear will be divided into two different categories, ‘Runway’, comprising the high-end pieces that the brand would normally create, and a more affordably priced line ‘The Marc Jacobs’.

The collection is currently being kept largely under wraps. WWD has secured one single campaign picture of the offering, which shows two models in oversized striped sweatshirts styled with colourful wide-leg trousers. Both are wearing charm necklaces and sunglasses. Lotta Volkova, the Russian stylist famed for her work with Demna Gvasalia on Vetements and Balenciaga, will style the lookbook. More images will be published in May.

“Ugggh. This image from our upcoming THE MARC JACOBS collection was leaked! Consider it a taste of things to come. We shot our fresh new pre-Fall collection (to be launched in May) last week. Poster size prints of a wide variety of twins wearing the collection were mounted in our showroom where the collection is being shown to buyers. I’m super excited with the results of the RTW and accessory collections. They look fantastic and fresh. The posters shot by @_hugoscott and styled by @lottavolkova are AMAZING. to see more… stay tuned for the ads and other visuals coming in April (unless someone else leaks them sooner.” — @TheMarcJacobs (Just a little break from Redux Grunge and Marc Jacobs Madison.)

Swimwear label Tigerlily is set to launch Vesta, its first ever jewellery collection. Known for supplying us with the ultimate holiday wardrobe, each piece in the collection is a celebration of traditional design, made modern with the use of acetate and metals. The line draws inspiration from the free-spirited 60s and glamorous lives of the jet-setters, think extravagant, pool-side pieces. The range pairs perfectly with the brand’s resort 1019 collection and will be available from December in store and online.