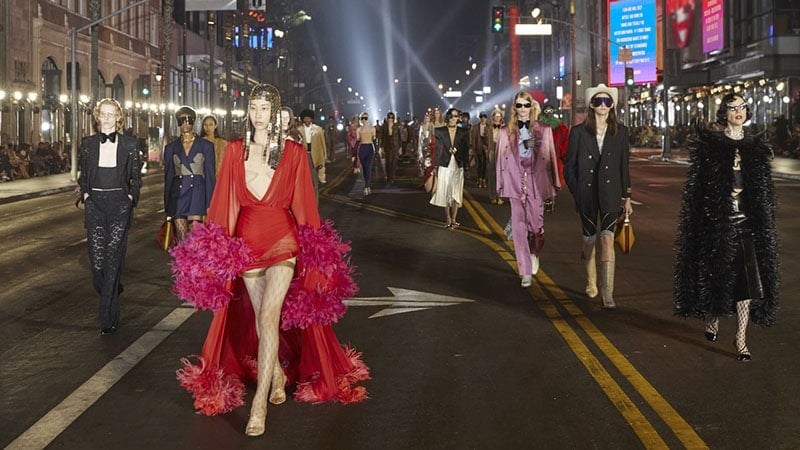 Gucci’s Love Parade breaks the internet, and Lady Gaga appears on two covers of Vogue. Find these stories and more as we uncover the top international fashion news of the week.

Gucci held its long-awaited Gucci Love Parade in Hollywood Boulevard. The Italian label shut down the street, showcasing 115 seasonless looks, from ballgowns to tuxedos, ’70s prints, and a homage to nostalgia. It was a star-studded event, with runway cameos from Jared Leto, Macaulay Kulkin, St Vincent, and many others – other celebrities attending the event included Miley Cyrus, Lizzo, Gwenyth Paltrow, and Dakota Johnston.

On the runway, Alessandro Michele paid tribute to Hollywood glamor, Western films, and retro touches. Cowboy hats, giant feather boas, bright and bold printed tuxedos, and glittering ballgowns were among the seasonless array of pieces. Of collection, Michele referred to the stories his grandmother would tell him about Hollywood in Rome. “This boulevard of stars lends perfect support to my uncurbed love for the classical world,” he said. “Hollywood is, after all, a Greek temple populated by pagan divinities. Here actors and actresses are acknowledged as heroes of the myth: hybrid creatures with the power to hold divine transcendence and mortal existence at the same time.”

Lady Gaga has made history by featuring on the covers of British Vogue and Vogue Italia for their upcoming issues. In anticipation of her new film, House of Gucci, the singer, and actress appeared in a Schiaparelli Haute Couture gown for the British cover -inspired by a ‘shocking’ ’30s perfume bottle. Her second look consisted of a multi-colored matador jacket, a gray powdered wig, and Tudor-style ruff. The Creative Director of Schiaparelli, Daniel Roseberry, explained how the ‘iconography’ of Schaiaperelli and Gaga create the perfect union. “For me, it feels like such a natural union… this complete melding of the minds,” he said.

Her shoot for the cover of Vogue Italia sought inspiration from the covers of Vogue in the ’60s and ’70s, featuring Twiggy, Wilhemina, and Jean Shrimpton. Gaga sports a Maison Valentino Haute Couture cacoon cape in a close-shot portrait with minimal makeup on the cover. Shot by Steven Meisel, she also wears a pink and white oversized ruffle Tomo Koizumi Couture gown, gowns by Chanel, Valentino, and Balenciaga, a white Noel Stewart structural vinyl balaclava, and one image completely nude.

The co-founder of 16Arlington, Federica Cavenati, has passed away. The 28-year-old fashion designer began her label with her boyfriend, whom she met in design school. Their pieces are well known for their feathered embellishments, satin finishes, and dramatic colors.

The Italian designer, known as Kikka to those closest to her, suffered from a short and sudden illness, a statement read. “The word ‘special’ feels insufficient to assign to the forcefield of optimism, passion, and kindness that was Kikka, but it is undoubtedly the most direct route to capturing her. Kikka was a white light; an unmistakable energy and the most encouraging, fiercely loyal friend. That the 16Arlington studio will no longer ring with her wicked laughter and boundless appetite for creativity is a tragic loss to all those lucky enough to know her. She will be forever missed.”

You Can Now Stay at Carrie Bradshaw’s Apartment

You can now get the keys to  Carrie Bradshaw’s NYC apartment – for a single night anyway. In honor of the SATC reboot, And Just Like That, AirBnB has set up an exact replica in Manhattan. The stay is complete with Cosmos and hidden details from the hit ’90s TV show. Visitors can stay for one or two nights, and prices start at $23. “We worked hand-in-hand with Warner Bros. and Sarah Jessica Parker to re-create the space in the most authentic way possible, full of Easter eggs to surprise and delight fans,” said Liz DeBold, a spokesperson for Airbnb.