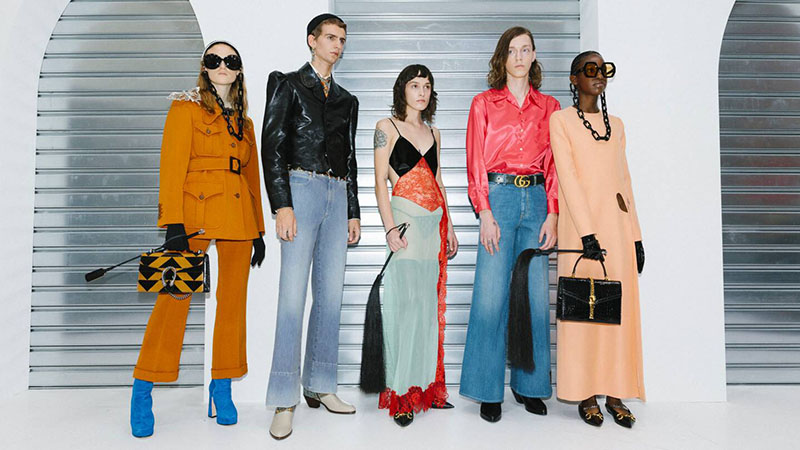 Fashion designers are donating to the Black Lives Matter movement, and Gucci is hosting ‘seasonless’ collections twice a year. Find these stories and more as we uncover the top international fashion news of the week.

Fashion brands and designers are showing solidarity and support for the Black Lives Matter movement. Many designers have posted to social media in support of the fight, including Alexander Wang, which has pledged to donate the NAACP Legal Defense Fund, Thurgood Marshall College Fund, Black Lives Matter, and the Marsha P. Johnson Institute. Brand alike Fabletics have also pledged, with the athletic wear company donating $50,000 to the ACLU for justice and ‘immediate change’. Comme Si will also be donating all of its proceeds this week to the NAACP Legal Defence Fund.

Furthermore, the CFDA has launched an initiative to support black talent in the fashion industry. In an announcement by Tom Ford and Steven Kolb, the CFDA announced the debut of its in-house employment program, which aims to implement a diverse and balance workplace for its members. The board will also create mentorship and internship programs for black students and recent graduates in the fashion sector.

Given the deplorable acts of racism and violence that we have seen play out in our country over this past week, our response as an organization was ﬁrst and foremost on our minds and in our hearts. Black people in this country are reeling from years of injustice stemming from institutional constructs such as slavery, segregation, mass incarceration, police brutality and economic and voter suppression. The Black community is experiencing anger and frustration on top of the effects of the global pandemic that has hit communities of color the hardest. Having a clear voice and speaking out against racial injustice, bigotry and hatred is the ﬁrst step, but this is not enough. It is not enough to simply say that we stand in solidarity with those who are discriminated against. We must do something. The CFDA outlines initiatives that will immediately be undertaken to create systemic change within our industry: • The CFDA will create an in-house employment program speciﬁcally charged with placing Black talent in all sectors of the fashion business to help achieve a racially balanced industry. This program will be tasked with identifying Black creatives and pairing these individuals with companies looking to hire. • The CFDA will also create a mentorship program and an internship program focused on placing Black students and recent graduates within established companies in the fashion sector. • The CFDA will implement and make available to our members a Diversity and Inclusion training program. • We will make immediate contributions and take up fundraising activities in support of charitable organizations aimed at equalizing the playing ﬁeld for the Black community such as, but not limited to the NAACP and Campaign Zero – amongst others. We urge each and every member of the CFDA to take stock of their corporate structure to ensure that they have a racially balanced workforce and we challenge the retail sector of the fashion industry to ensure that their roster of brands and their product assortment is representative of the Black talent in our industry. Sincerely, Tom Ford, Chairman Steven Kolb, President & CEO #blacklivesmatter

Gucci will no longer hold a traditional fashion schedule, the designer said in a press conference. Instead, the Italian fashion house will host ‘seasonless’ collections twice a year for a more sustainable future. “I will abandon the worn-out rituals of seasonalities and show to regain a new cadence, closer to my expressive call,” said Alessandro Michele, the Creative Director.

“We will meet just twice a year to share the chapters of a new story. Irregular, joyful, and absolutely free chapters, which will be written blending rules and genres, feeding on new spaces, linguistic codes, and communication platforms. And beyond. I would like to leave behind the paraphernalia of leitmotifs that colonized our prior world: cruise, pre-fall, spring-summer, fall-winter. I think these are stale and underfed words. Labels of an impersonal discourse that lost its meaning.”

A call to nature, to childlike imagination and to simple things in life: the themes behind #SoDeerToMe, the #GucciPreFall20 campaign. Discover more through link in bio. #AlessandroMichele @alessandro_michele In February this year, Gucci partnered with The @lionssharefund, which raises funds to protect endangered species and their natural habitats. The House donates 0.5% of its media spend to The #LionsShare Fund every time an animal is featured in its advertisements.

Pitti Immagine has called off its physical events for the season, including Pitti Uomo, which runs from September 2 to 4. The Florence-based event and its board ‘acknowledged the insufficient number of attendance confirmations and the persisting difficulties of companies’.

“We believed in this until the end, we were determined to keep the role of Pitti shows as an essential tool of commercial promotion at the service of the Italian fashion industry and specifically of those small and medium-sized companies of excellence and artisanal ones we’ve always represented,” said Claudio Marenzi, the President of Pitti Immagine.

The Board of Directors of Pitti Immagine decides to postpone the physical fairs to January 2021: all our energy now goes to the Pitti Connect digital platform open to all exhibitors and buyers from early July and throughout the whole summer. More on pittimmagine.com #pitticonnect

Jackson Yee is the new ambassador of Tiffany & Co. The brand is planning to expand into China, and this partnership is one of its first moves. The Chinese singer wears rose gold men’s jewelry, which is a popular choice for the market. “In China, the men’s customer is much more engaged, much more enthusiastic about men’s fashion and much more comfortable with wearing jewelry, cosmetics, fashion all these different categories,” said Reed Krakoff, the Chief Artistic Director at Tiffany’s. “The opportunity is really quite big.”

Dolce & Gabbana is taking part in Milan Digital fashion Week alongside Gucci and Bottega Veneta. The Camera della Moda, which runs the event, cut ties with Dolce & Gabbana more than two decades ago, but this venture represents something ‘new’. “I consider this more of an entrance, as everything has changed so much in the meantime, it’s been so long, and everything is new, said Carlo Capsa, the President of the Camera. “This is an important message of unity and solidarity in such a difficult moment. It has a symbolic value.”

The matching pineapple crop top and skirt are paired with a coat and a pair of #DGSicilianJungle sandals. Discover the look in your nearest boutique through the link in bio. #DGWomenSS20 #DolceGabbana