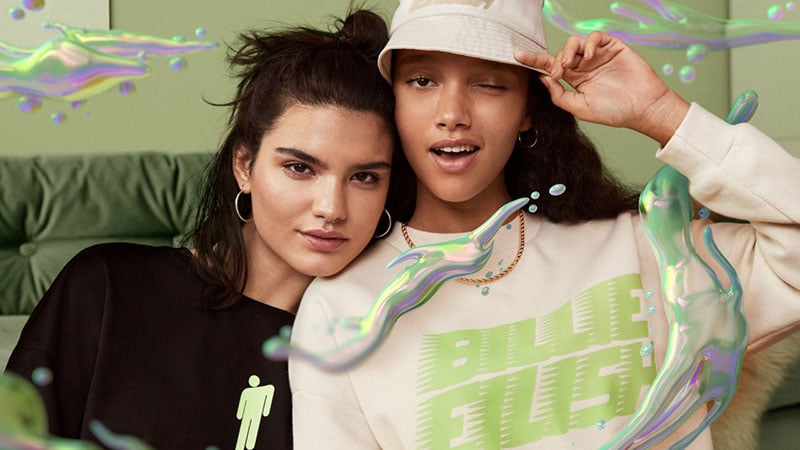 This week in fashion, Gucci collaborates with Disney, and Billie Eilish launches her merchandise line with H&M. Find these stories and more as we uncover the top international fashion news of the week.

Gucci is releasing a collection with Disney to celebrate Chinese New Year. This year honors the year of the rat – the capsule line will feature Mickey Mouse. The campaign was filmed in Disneyland, directed by Harmony Korine and art direction by Christopher Simmonds. Among the lineup of the launch included Earl Cave, Zoë Bleu, and Chinese actress and Gucci ambassador, Ni Ni.

The collection features bags, sneakers, T-shirts, pajamas, and a series of jewelry. “The colorful, energetic imagery has the look of holiday postcards, and the eclectic, surreal spirit of today’s Gucci is perfectly at home in the fantasy world of Disneyland,” says the label in a press release. “Through Harmony Korine’s distinctive lens, it is easy to see how Disneyland inspires an uninhibited, childlike sense of fun.” The Gucci x Mickey Mouse collection is available for purchase in-store and online.

Happy Year of the Mouse from #Gucci. Celebrating Chinese New Year with the #DisneyXGucci collection, shot by photographer and director #HarmonyKorine in Disneyland, art directed by @christophersimmonds and creative directed by @alessandro_michele, starring Gucci ambassador and actress Ni Ni @captainmiao. Designed by #AlessandroMichele, the collection features accessories and pieces with Walt Disney’s True Original, Mickey Mouse, appearing on a GG motif bucket bag with leather trim. Discover more about the collection through link in bio. ©Disney

Teri Hatcher is starring in the new Marcell von Berlin campaign and showcases her in a series of gowns. The actress features in the German brand’s latest ad, as she represents the ‘modern, powerful woman,’ the designer explains. “Teri is a successful actress and businesswoman. On the other hand, she is so sweet, has great energy, and brought such good vibes to the shoot,” says Marcell Pustul, the label’s CEO. “We wanted to work with someone that embodies the modern, powerful woman of our current time.”

So excited to be a part of this campaign. Feeling a side of myself in these beautiful clothes that’s been quiet for a while. Grateful to have fashion & friendship bringing in #2020 in a fabulous way. Stay tuned for more. Link in bio #feelinggood #feelingblessed #55 #healthylifestyle #gratitude

Billie Eilish is launching a collaboration with H&M Divided, which is sustainably sourced. The merchandise collection features oversized hoodies, T-shirts, beanies, and socks, which reflects the singer’s distinctive style. The ‘Bad Guy’ singer often sports large items of clothing as she wishes to prevent unwanted comments about her body.

She is an advocate for sustainable products and climate awareness – this plays a role in the collaboration. “Billie Eilish is obviously an inspiring artist but also someone a lot of people around the world admire for her personal style and empowering way of expressing her values,” explains Emily Bjorkheim, the Head of Design at H&M. “We want to enable her fans to step into her world and feel empowered to freely express their style as well.” The collection is available for purchase online and in-store now.

Sir David Jones has died at the age of 76. The former boss of various British high street labels battled Parkinson’s Disease since the age of 39, but he made it public in 2000. His achievements in the fashion industry include transforming Next into a ‘powerhouse’ brand and was the Executive Chairman of JJB Sports. “His blend of common sense, financial prudence, and personal warmth has been an inspiration to all of those who have worked for him,” says Lord Simon Adam Wolfson, the Chief Executive of Next.

The businessman was in the Chief Executive role from 1988 to 2001, and the brand experienced significant growth. Since his move from the role, Next has seen consistent development in sales and its net share increasing by 5.2%.

I was saddened to hear today about the death of David Jones, the man who pulled Next back from the brink of disaster and set it on course to be a powerhouse of mainstream fashion and more. In 2004 we awarded David with @drapersonline 2nd Lifetime Achievement Award. The 1st winner the year before had been George Davies, who had been David's boss before being fired and replaced by Jones in 1988. George was very chuffed to get our award and reportedly called up David to congratulate him, thereby ending the war of silence between them. David Jones joined the mail order industry at the age of 17 after being told by a careers teacher: "Go and get yourself a job at Kays. They'll take anybody there." What a story. David Jones was a gentleman and a remarkable retailer. RIP.

Fendi is naming Nick Knight as its photographer for advertising campaigns. He will replace the late Karl Lagerfeld, who passed away in February 2019. The late designer was ‘famously’ the brand’s photographer until his death – this announcement marks a new chapter for the Italian fashion house. “[Knight] listens, he is a great artist, I always admired him, and now for the first time I had the opportunity to work with him,” says Venturini Fendi. She also explains that the photographer is a ‘real visionary’ and he puts her in ‘such a different mood, more open to experiences, and [she feels] more freedom.’

Silvia Venturini Fendi revealed why she chose Nick Knight to replace the late Karl Lagerfeld as the photographer for the brand’s advertising campaigns. ⁣⁣ ⁣⁣ Fendi said in an interview that she chose to work with Knight because “he is a real visionary.” The British photographer, she believes, was able to map out “a new vision of the Fendi woman.”⁣⁣ ⁣⁣ Tap the link in bio for more. ⁣⁣ ⁣⁣ Report: @luisazargani ⁣ 📸: @nick_knight ⁣ ⁣ —⁣ #wwdfashion⁣ #fendi