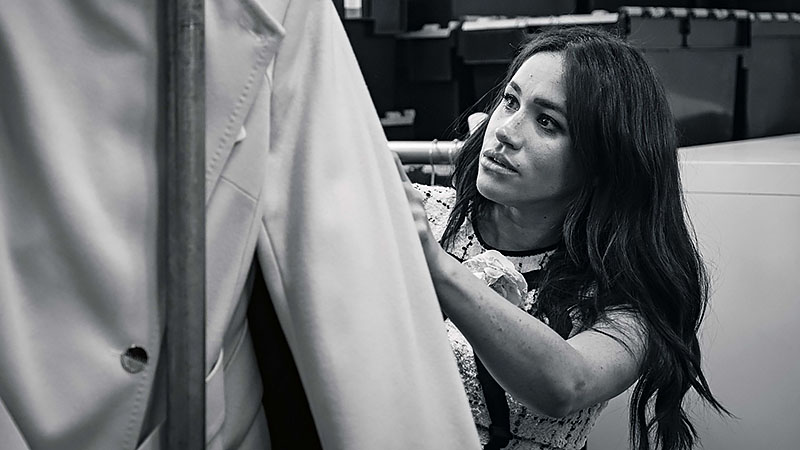 This week in fashion, Meghan Markle is guest-editing British Vogue, and Cosmo is launching its first fragrance. Find these stories and more as we uncover the top international fashion news of the week.

The Duchess of Sussex is guest-editing the September Issue of British Vogue. The issue, Forces of Change, features 15 ‘fearless’ women, who have inspired the Duchess in her life. Some of the guests include Jane Fonda, Salma Hayek, Christie Turlington and many others.

“Through this lens, I hope you’ll feel the strength of the collective in the diverse selection of women chosen for the cover as well as the team of support I called upon within the issue to help bring this to light. I hope readers feel as inspired as I do, by the ‘Forces for Change’ they’ll find within these pages,” said Ms Markle in a statement.

Introducing the September 2019 issue of #BritishVogue, guest-edited by HRH The Duchess of Sussex @SussexRoyal. Entitled #ForcesForChange, the cover features 15 world-leading women who are reshaping public life for global good, and were personally chosen by The Duchess of Sussex, and British Vogue’s editor-in-chief @Edward_Enninful. The 16th slot – which, in print, appears as a mirror – is intended by The Duchess to show how you are part of this collective moment of change too. Click the link in bio to read about how The #DuchessOfSussex became the first guest editor of the September issue in the magazine’s 103-year history. Photographed in New York, Stockholm, London and Auckland by @TheRealPeterLindbergh, with fashion editors @Edward_Enninful and @TheRealGraceCoddington, hair by @BartPumpkin and @SergeNormant, make-up by @TheValGarland and @Diane.Kendal, nails by @LorraineVGriffin and @YukoTsuchihashi. On newsstands Friday 2 August. Starring: @AdwoaAboah @AdutAkech @SomaliBoxer @JacindaArdern @TheSineadBurke @Gemma_Chan @LaverneCox @JaneFonda @SalmaHayek @FrankieGoesToHayward @JameelaJamilOfficial @Chimamanda_Adichie @YaraShahidi @GretaThunberg @CTurlington

Cosmopolitan is Launching a Fragrance

Cosmo is releasing its first fragrance, Eau de Juice, and Ashley Benson is the spokesperson. The magazine chose its name, Eu de Juice, as ‘Juice’ is the slang term for perfume in the industry. The bottle resembles a crumpled juice box and is available for purchase in 925 Ulta stores in standalone stores that look like fridges.

Introducing Eau de Juice, our brand-new fragrance line available exclusively at @ultabeauty. ?The collection comes in four high-end scents and—let's be honest—you and your Insta feed need 'em all. Visit the link in our bio to shop. ?

MTV is collaborating with CFDA to establish the Fashion Trailblazer award for the first time. In honour of the opening ceremony, Marc Jacobs has been named as the first recipient. This award will honour his contributions to fashion, music and everything in between. The VMAs will take place on August 26th at the Prudential Centre in New Jersey.

@TheMarcJacobs will receive @MTV’s first-ever Fashion Vanguard Award this August. ? Swipe up on our Instagram Stories to read about his grunge beginnings, musical influences and what #MTV means to him via @VogueMagazine.

The Victoria’s Secret Fashion Show has been cancelled entirely. One of the Angels, Shanina Shaik, shared that the show will not take place this year, due to ‘branding reasons’. “Unfortunately, the Victoria’s Secret show won’t be happening this year,” she said. “They’re trying to work on branding and new ways to do the show.” Last year, the show faced its worst rating on record and had been tarnished with several controversies.

The #victoriasecret fashion show is canceled this year. But here are a few of @naomi’s best VS moments:

Claudia Schiffer and Stephanie Seymour on the Cover of Vogue

Claudia Schiffer and Stephanie Seymour are the newest faces of Vogue Italia. The models took their own self-portraits in a double spread. The images are a tribute to Helmut Newton’s work but from a female perspective. “When you are photographing women such as Stephanie and Claudia, who are literally like the walking lexicons of fashion gesture in photography, there are things they will and will not do,” explained Vogue photographer, Collier Schorr. “There’s not one thing that you see in these photographs that Claudia didn’t want to do — if she didn’t want to do it, she changed it.”

SHE IS BACK ✨ CLAUDIA BY CLAUDIA Our August Issue features @claudiaschiffer in @ysl photographed by @collierschorrstudio styled by @vanessareidofficial. On Newsstands August 6th! “Because of who I am and who they are, I think these shoots are about women’s acknowledgement of their own sexuality, and is very different to the representation of desire, which is always connected to the maker of the picture. I think this was about Claudia, Stephanie’s and my relationships with our sexualities and bodies, and about being seen as older women.” #CollierSchorr See more via link in bio. Full credits: #ClaudiaSchiffer @dmanagementgroup Editor in chief @efarneti Creative director @ferdinandoverderi Casting directors @pg_dmcasting @samuel_ellis @ DM Fashion Studio Interview @pimcharlottecotton Make-up @hiromi_ueda @artandcommerce Hair @garygillhair @streetersagency Manicure @louimarie_nails @jaqmanagement Set design @tomotattle @streetersagency Executive producer @sylviafarago