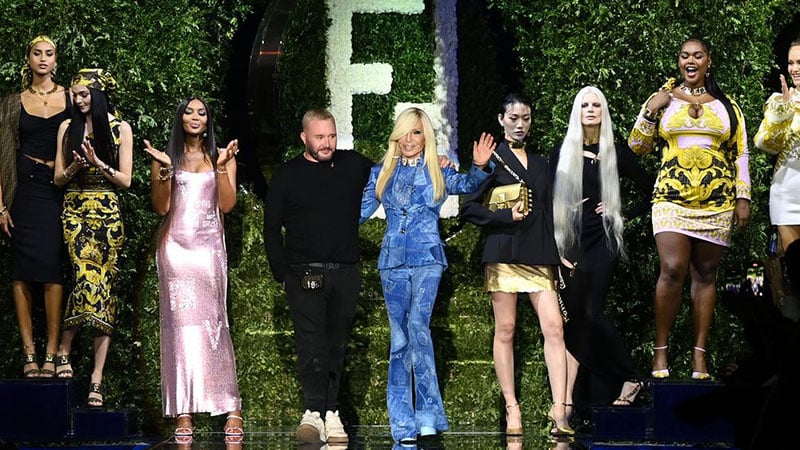 As one fashion week finishes, another takes over. From Fendi x Versace’s surprise collaboration to Paris Fashion Week, here are the biggest international fashion news stories of the week.

Paris Fashion Week is well underway and is closing out an enormous fashion month for SS22 shows. This week includes a stellar lineup, with shows from Chloé, Saint Laurent, Dior, and Balmain. Dior lent into the inspiration from the 1960s Marc Bohan era, who famously created the ‘Slim Look,’ in itself inspired by the Flapper scene of the ’20s. The collection featured a series of color block tailored mini skirt suits, bold prints, and boxing attire. Saint Laurent brought back tailored suits inspired by classic rock and roll references. This included high-waisted jeans, spandex bodysuits with asymmetrical draping, floral prints, blazer dresses, and chain mail vests. It was all presented in front of Paris’ most famous backdrop – the Eiffel Tower.

Chloé presented its SS22 collection with the planet in mind. Every garment in the collection is ‘innately low-impact,’ with linen, deadstock fabric, and other ethically sourced materials and practices. Valentino reintroduced the beauty of florals with its latest collection. The designer’s Creative Director, Pierpaolo Piccioli, wished to represent the fashion in the streets of Paris. This collection featured a series of bold coats, flowy floral dresses, cut-out mini dresses, and an assortment of bright hues. Balenciaga teamed up with The Simpsons to showcase its latest collection, with Homer, Marge, Lisa, Maggie, and Bart, alongside Walen Smithers, and Ned Flanders, with a special cameo from Anna Wintour. The cartoon family wore oversized puffer jackets, bodysuits, and gold dresses. Up next this week includes Givenchy, Vivienne Westwood, Hermès, and Alexandre Vauthier, Maison Margiela, followed by Chanel, Miu Miu, and Louis Vuitton in the closing days.

Thierry Mugler welcomed the launch of his exhibition, Thierry Mugler: Couturissime. The star-studded event included famous faces like Cardi B, Irina Shayk, Carla Bruni, Coco Rocha, and designers Riccardo Tisci, Christian Louboutin, and Haider Ackermann. The event celebrates Mugler’s otherworldly and hyper-sexualized designs, including depictions of insects, motorcycles, devils, and many more. His works are much adored in the industry, often worn by the likes of Beyoncé, Lady Gaga, Cardi B, and Kim Kardashian.

His collections in the ’90s, such as Les Insectes and Chimère, inspired many designers moving forward, including Alexander McQueen, John Galliano, and many others. “[The] the fashion pieces — I cannot call them fashion; they are costumes for your everyday mise-en-scène and the everyday directing of yourself,” said Mugler. Each of his garments are incredibly well-crafted, with sculpture-like silhouettes that emphasize and celebrate the feminine figure. The exhibition is taking place in the Musée des Arts Décoratifs in Paris, from September 30 to April 24, 2022.

Olivier Rousteing is celebrating ten years as Creative Director of Balmain by throwing a festival event. In Paris Fashion Week, the designer enlisted some of the leading supermodels to present his new collection and an anniversary special of his most iconic looks. The runway opened with Naomi Campbell, followed by Natalia Vodianova, Soo-Joo Park, Milla Jovovich, Adut Akech, and Carla Bruni, each wearing his most decadent pieces.

The SS22 collection included giant metal chain tops, deconstructed chain dresses, skin-skimming draped fabric dresses, beaded gowns, and cut-out garments. His pieces include bands, straps, and weaving resembling bandages – an homage to his recovery from a burn accident in 2020. The festival began with a voice-over from Beyoncé. “I am incredibly happy to salute you on this special occasion in Paris,” she said. The show was held in a concert hall and featured musical performances from Doja Cat and Franz Ferdinand.

Inside Versace and Fendi’s Surprise Collab

Versace and Fendi shocked the fashion world with a surprise collab, dubbed Fendace. Closing out Milan Fashion Week, the two labels joined forces and presented a new collection, featuring a mash-up of some of the pairs’ most iconic styles. “It’s the beauty of togetherness,” said Kim Jones, Creative Director of Fendi Womenswear. Some standout pieces included a modern take on Versace’s safety-pin dress and Fendi’s Baguette and Peekaboo bags.

The catwalk included a denim suit with Fendi and Versace logo prints, silk headscarves, baroque prints, and gold metal dresses. The runway starred some of the hottest supermodels, including Naomi Campbell, Gigi Hadid, Vittoria Ceretti, and Adut Akech. “It’s a first in the history of fashion: two designers having a true creative dialogue that stems from respect and friendship,” said Donatella Versace. “It led to us swapping roles to create these two collections.”