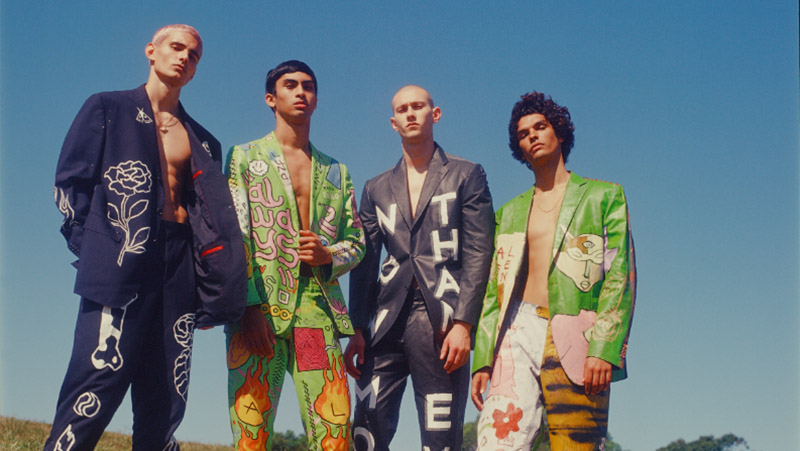 London Fashion Week has been postponed, and Megan Thee Stallion is the new face of Savage x Fenty. Stay up to date with the hottest international fashion news stories of the week.

Dior is launching a virtual way to try on the latest sneakers, in a collaboration with Snapchat. The lens showcases the B27 men’s sneakers, where users can point the camera at their feet and check out the six variations. The footwear, designed by Kim Jones, features a sportswear feel, available in low and high top versions. The shoes feature calf leather and nubuck, with the Dior Oblique logo placed on the sides. Those who use the Snapchat filter and wish to purchase can do so within the app or on the Dior e-commerce platform.

Maxima Cortina has passed away at the age of 25, and the cause has not yet been determined. The model previously walked for brands such as Clavin Klein, Jason Wu, and Mani, appearing in Vogue and walking in Paris Fashion Week. “I was so happy that she got to be part of my show during the past New York Fashion Week. It was such a special moment that we got to share. I am extremely saddened by the news of her passing,” said Jason Wu.

Savage x Fenty is tapping Megan Thee Stallion as the face of its 2020 holiday collection. The campaign features a plush pink room surrounded by gifts and pearls. The rapper first collaborated with Rihanna’s brand in May, with the SavagexTheeStallion collection.

The campaign includes two XTRA VIP boxes with a red lingerie set and a black set. “Meg is the energy we were looking for,” said Rihanna. “She is a risk-taker with an attitude, character, and personality.” The collection, called the Hottie Holiday, will debut on November 1.

The British Fashion Council is postponing London Fashion Week in January. Instead, the fashion event will occur in February, blending with a digital format for the first time. This comes as COVID-19 restrictions amp up in the British capital, as well as upcoming customs issues. The event will also be one of the first gender-neutral fashion shows for the city.

“When we launched London Collections: Men in June 2012, which then became London Fashion Week Men’s, we were responding to an industry need and to the necessity to have a platform for British menswear designers,” said Dylan Jones, the BFC Men’s Chair. London Fashion Week will take place from February 19 to 23.

The BFC announces that the next edition of London Fashion Week will take place from Friday 19th to Tuesday 23rd February 2021 with menswear designers being encouraged to take part in the February event. The decision to move the traditional menswear showcase from January to February in 2021 was made in light of the current environment surrounding Covid-19, potential challenges post Brexit, following surveys and roundtables with designers and conversations with sales showrooms regarding selling periods. Visit the link in bio to find out more #LFWReset

M.J Bale is collaborating with AIME to celebrate ReclAIMEd’s first birthday. ReclAIMEd is an initiative founded by AIME, which uses deadstock and transforms them into new pieces. This is the second iteration of Suits for Suits – M.J Bale is donating 14 suits that will be the canvas for some of Australia’s leading artists. They will use these suits to display their art forms, which will then be auctioned off, with the sales going to AIME.

AIME is an ‘imagination factory’ for marginalized youth. The artists taking part in the collection include Bronwyn Bancroft, Georgia Hill, and Dan Single, among many others. “Suits for suits is about us building bridges from a traditional corporate symbol to open the doors for kids around the world to see through the world of imagination, and what is possible,” said Jack Manning Bancroft, the Founder of AIME.

ReclAIMEd: M.J. Bale has teamed up with @aimementoring to raise awareness of fashion waste, donating vintage suits to the Indigenous mentoring non-for-profit for 14 of Australia's most promising artists to paint on. The suits-as-canvas will be auctioned off on shop.aimementoring.com, with 100% of sales going to AIME to help close the gap in Indigenous education. The project, says #aimementoring founder, Jack Manning-Bancroft, is about "building bridges from a traditional corporate symbol to open the doors for kids around the world to see through the world of imagination, and what is possible.” "It’s an honour for M.J. Bale to work again with AIME, an organisation transforming the lives of not just
First Nations kids, but marginalised children worldwide," says M.J. Bale founder, Matt Jensen. "Textile waste and toxic landfill is a huge challenge facing our generation and the generations to come, and this project with AIME hopefully shines a spotlight on the opportunity we have to not just reuse and recycle, but use our collective imagination to reclaim the future.” Read more via link in bio