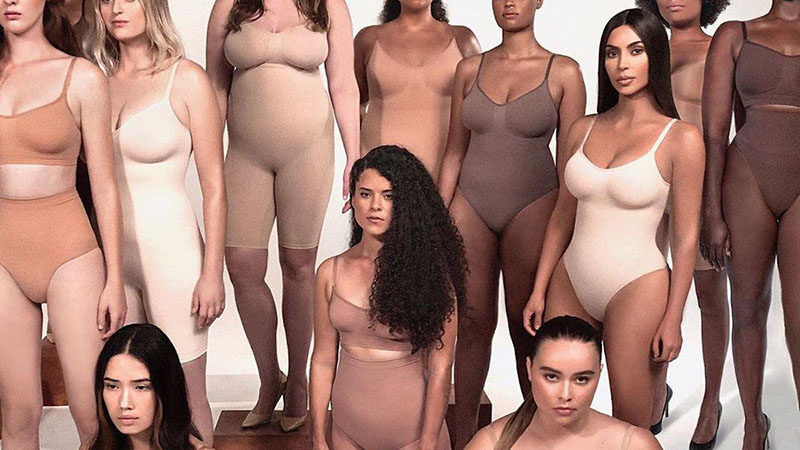 This week in fashion, Zendaya is the new face of Lancôme’s new fragrance, and MFW begins in Melbourne. Find these stories and more in this week’s top international fashion news stories.

Following the controversy around the name of her shapewear line, Kim Kardashian is changing its name to Skims. Previously Kimono, the reality star faced backlash after many claimed it was cultural appropriation. “After much thought and consideration, I’m excited to announce the launch of Skims Solutionwear,” she said in an Instagram post.

“I love the idea that the pieces will be the closest thing to someone’s skin, skimming with amazingly soft and supportive fabrics which accentuate the best parts of our bodies.” The line launches September 10th.

My fans and followers are a huge inspiration to me – I’m always listening to their feedback and opinions, and am so grateful they shared their ideas for a new brand name. After much thought and consideration, I’m excited to announce the launch of @SKIMS Solutionwear™ coming September 10. I love the idea that the pieces will be the closest thing to someone’s skin, skimming with amazingly soft and supportive fabrics which accentuate the best parts of our bodies.  Available in sizes XXS – 5XL, SKIMS Solutionwear™ is for every body. SKIMS.COM. #ShowYourSKIMS Photo: #VanessaBeecroft

Lois Vuitton Moet Hennesy (LVMH) is re-naming its Special Prize after the late designer, Karl Lagerfeld. As part of the annual design competition, this prestigious award will go to the finalist who most impresses the jury. “[Lagerfeld] was involved in the Prize since its launch,” said Delphine Arnault, the EVP of Louis Vuitton. “The Karl Lagerfeld Prize naturally perpetuates the closeness we developed over the years and is a tribute to the man’s unique creative genius, to his ability to turn Paris  into the fashion capital of the world.” The award takes place September 4th in Paris.

Melbourne’s Fashion Week has begun in the Australian city and is showcasing the best fashion in the country. Throughout the week, there will be more than 150 events throughout Melbourne, with more than 300 designers. In its 25th year, some of them include parties, talks, workshops and other free fashion experience. For more information, check out the MFW website.

At our Opening Town Hall show, @jatoncouture returned to the runway to present archival pieces and bespoke gowns in celebration of their impressive career. #melbournefashionweek #mfw #jatoncouture #adutakech #adut

The Cuban-born designer, Isabel Toledo, has passed away at the age of 59 from breast cancer. She became one of the former First Lady, Michelle Obama’s favourite designers, well-known for her meticulous craftsmanship within her pieces. Born in Cuba in 1960, she moved to NY where she studied fashion and served as Creative Director of Anne Klein from 2006 to 2007. “What I want is to encourage kids to take on challenges and risk, especially when you’re young and at the beginning of your career. We’re too safe. Risk everything for what you love to do, and the rest will follow,” she said in 2012.

New York designer Isabel Toledo has died from breast cancer. The independent designer made a name for herself in fashion circles with her focus on craft. A "designer's designer," Toledo rejected themes and far-flung inspirations, instead she let fabric and material guide her, draping in ingenious, elegant ways. At the link in our bio, Vogue Runway's @NicolePhelps remembers Toledo and her many accomplishments as an artist. Photographed by Norman Jean Roy, Vogue, November 2005

Zendaya is the New Face of Lancôme’s Fragrance

Zendaya is the new face of Lancôme’s latest fragrance, Lancôme’s Idôle. The actress and model became an ambassador for the beauty brand in February, with hopes to reach a younger audience. The new scent features Zendaya discussing who her idols are. “I personally think that an idol — and who your idol should be — is yourself really,” she said behind the scenes. “An idol is whatever definition that you want to make it for yourself. I think it’s important to make it for yourself and not allow people to define what it is for you. I always say my idol is my future self. I don’t know who she is yet, I haven’t met her yet, but I know she’s there, and she’s waiting for me in the future.”

Q&ZendayA. Do you have a question for @zendaya ? Ask away! #Lancome #Idole #IdoleByLancome #IcanWeWill #Zendaya