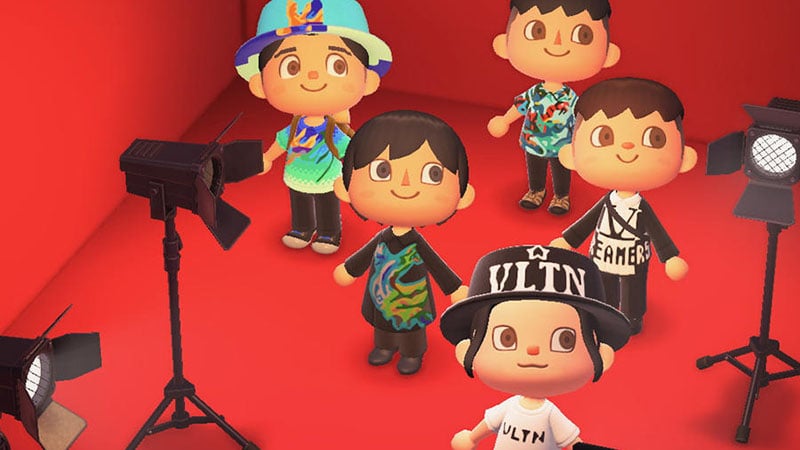 Fashion designers are showcasing new collections on Animal Crossing, drones are planting one billion trees, and Crayola launches inclusive skin tones. Keep scrolling to find these stories and more as we discover the happy news of the week.

Ronald van der Kemp has hosted a fashion show from the balconies of an Amsterdam hotel. The designer created face masks with couture styling that reflects his elaborate dresses. This show aimed to shed light on not just the fashion, but also his upcoming auction. The proceeds of the items he sells at the auction will go towards Refugee Company, which will open a factory in the Netherlands for refugees to help create personal protective equipment.

The show consisted of delicate and Haute couture face masks and featured models waving white flags from the balconies of the hotel. “The white flag stands also for a black sheet of paper,” van der Kemp explained. “What do you want to change? It’s just my plea for everyone to make things better.” Pieces included blue and black polka dot dresses, butterfly headpieces, and futuristic colors.

Designers are taking fashion shows to the next level in lockdown by using Animal Crossing. The Nintendo game initially launched in 2001 but was re-released in March 2020. Designers around the world are now utilizing the platform to share their latest collections – the game has approximately 11 million players across the world.

Saint Laurent, Burberry, Marc Jacobs, Valentino, and Marine Serre are some of the designers who have shared their latest lines in the game. Valentino shared a curated selection of the SS20 collection. “More often than not, people [on Animal Crossing] represent themselves with an avatar that shares their true skin color and real hair,” said Kara Chung, an Asian-based photographer who creates the virtual fashion shows.

A post shared by ANIMALCROSSINGFASHIONARCHIVE (@animalcrossingfashionarchive) on May 14, 2020 at 9:08pm PDT

3. Canadian Company Plans to Plant One Billion Trees by Drone

Flash Forest is planning to plant one billion trees, and they’re doing it via drone. The wildfires in Canada has caused millions of trees to perish, which inspired the start-up to start the project. Using state-0f-art technology, the company plans to seed 40,000 trees in a month. By 2028, they plan to have begun the growth of 1 billion plants. A swarm drones drop pre-mixed seeds into the ground, which can germinate faster than hand-planted seeds would. “It allows you to get into trickier areas that human planters can’t,” said Angelique Ahlstrom, the Co-Founder and CFO of Flash Forest.

Bryce and Angelique got our truck all stickered-up! They’re on location at our new production facility outside Orangeville, Ontario. We recently found a space with the ability to house our pod-production machines + equipment and also continue R&D on our drone and mapping technology 👋 🌲 . . . #FlashForest #Sustainability #Environment #DronesForGood #Reforestation #Drone #Planting #Trees #CarbonSequestration #ClimateChange #NatureNow

4. The Humpback Whale Population is Increasing

The humpback whale is making a comeback, which is excellent news for the environment. These sea creatures were once known as endangered, with the population severely low due to whaling. In 18830, there were approximately 27,000 western South Atlantic whales, but that number dropped to 400 in the mid-50s as a result of hunting. Now, thanks to the ban on commercial whaling in 1983, the number of whales is 25,000, or 93% of the original size.

A single whale’s body stores approximately 33 tonnes of CO2, and the entire population of WSA humpbacks accounts for 813,780 tonnes. If these whales didn’t exist, these emissions would be ejected into the atmosphere and contribute to the warming of the planet. “This is a clear example that if we do the right thing, then the population will recover,” said Dr. Alexandre Zerbini, a marine biologist at National Marine Mammal Laboratory. “I hope it serves as an example that we can do the same thing for other animal populations.”

Despite being at the top of the food chain, whales are one of the most recognizable endangered species. Recently — and remarkably — one particular population, the Western South Atlanta Humpback Whales, have managed to make a recovery in population. ⁠ ⁠ Back in the 1830s, records indicate that there were around 27,000 WSAs in existence, but just a little over a century later — in the 1950s — that population dwindled to as few as 450 whales, and remained under 1,000 whales total for decades to come. Today, miraculously, the population is around 25,000 whales — nearly the entire population it was back in the 1830s. To find out more about this incredible recovery, and what it means for other endangered species, head on over to the link in our bio. ⁠ ⁠ #livegreen #learngreen #endangeredspecies #protectouroceans #wildlife #humpbackwhales #greenmatters ⁠

Crayola is launching a set of crayons that reflect a diverse range of skin tones. The 24 new shades represent over 40 colors of the world, with the help of MOB Beauty in conjunction with UN World Day for Cultural Diversity for Dialogue and Development. “With the world growing more diverse than ever before, Crayola hopes our new Colors of the World crayons will increase representation and foster a greater sense of belonging and acceptance,” said Rich Wuerthele, the CEO of Crayola. “We want the new Colors of the World crayons to advance inclusion within creativity and impact how kids express themselves.” Colors of the World is available for purchase in July.

We are excited to introduce our new line of crayons, Colors of the World, available now for pre-order via the link in our bio!👦🏿👩🏻👦🏽👦🏾👩🏼👩🏾👦🏼👩🏽👦🏻👩🏿⁠ ⁠ We've teamed up with @themobbeauty co-founder and CEO, Victor Casale, to create 24 new specially formulated crayons representing more than 40 global skin tones. With the Colors of the World crayons, we hope to cultivate a more inclusive world for children of all ages, races, cultures and ethnicities. ⁠ ⁠ #ColorsoftheWorld⁠ #Crayola⁠ ⁠ ⁠ ⁠ ⁠