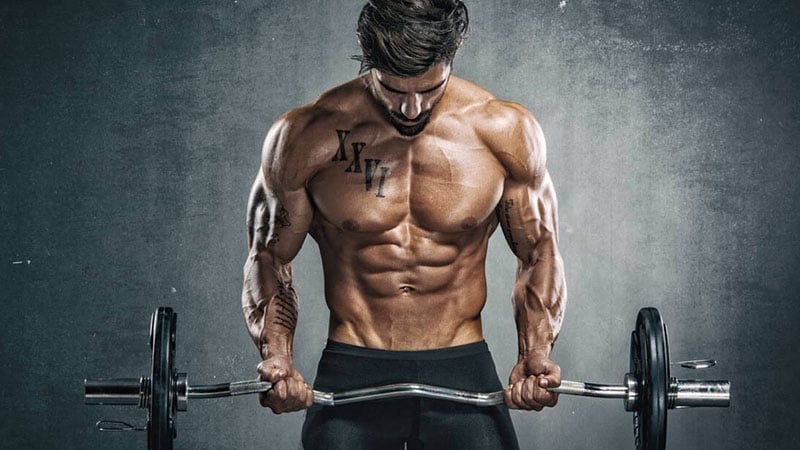 Sun’s out guns out with the ultimate biceps workout for men. Not only do large, toned biceps look great, but the bicep muscles are also responsible for a considerable amount of arm function and movement. Boost arm day at the gym with exercises that target all parts of the biceps and supporting muscles. The workout below also aims to work the muscles through all of their functions, from turning the forearm, to bending the elbow and moving the shoulder. Level up with combo sets that allow you to load the weight, plus incorporate resistance bands to eliminate weak parts of some classic exercises.

The bicep muscles help to move both the shoulder and elbow joints, as well as twist the forearm. This muscle creates a lot of your general arm movement and function. The main muscle is the two-headed biceps brachii, which sits at the front of your arm and is the most visible arm muscle. It’s supported by the deeper brachialis muscle, and brachioradialis in your forearm. Understanding the make-up of your bicep muscles will allow you to hit your workout harder and more efficiently, for maximum gains. 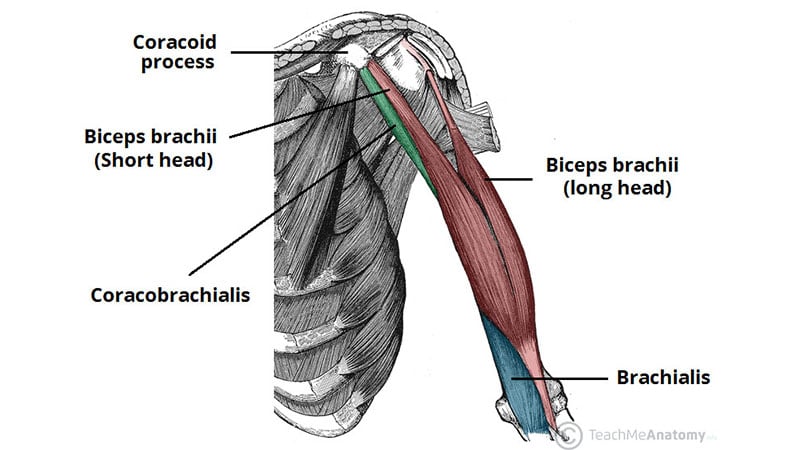 The short head of the biceps brachii sits on the inner front of the arm, closest to the chest. It attaches to the scapula and elbow.

The long head of the muscle sits on the outer side of the front of the arm, attaching from above the shoulder joint, down to the elbow.

Attaching from mid-humerus, the brachialis sits deeper than the biceps brachii and supports the flexing of the elbow joint.

Sitting lower down in your forearm is the brachioradialis, which assists the biceps brachii with flexing the elbow joint.

The best way to make the perfect biceps workout is to get the muscle working through all three of its key functions — twisting the forearm, bending the elbow, and flexing the shoulder. Curls are going to be the basis of each move because you’re working a hinge joint. However, to elevate your exercises, you need to challenge each muscle more by increasing the intensity of each move. Additionally, you need to take the muscle through the full range of motion, from complete contraction to full extension. This workout is based on the ATHLEAN-X program from Jeff Cavaliere. He was the Head Physical Therapist and Assistant Strength Coach for the New York Mets. Plus, he has a Masters Degree in Physical Training and is a Certified Strength and Conditioning Specialist. As such, in addition to being crazy fit himself, his workouts are backed by science.

Set number one of the ultimate biceps workout has two parts that should be completed as a drop set. This is a big exercise that will allow you to overload your weights. Your biceps are stronger as you lower the weight than when you lift it. Therefore, by doing a cheat curl, you can use a heavier weight that’s going to work your arms more as you lower the barbell, creating bigger mass. 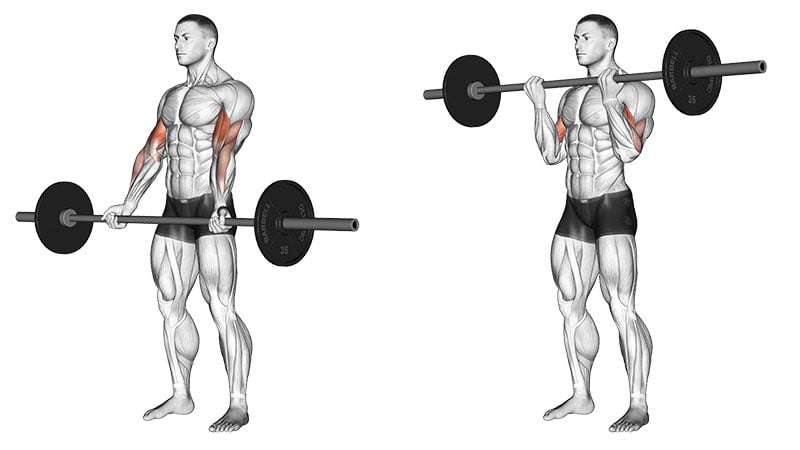 Barbell drag curls are going to shift the focus of the move to preference the long head of the bicep. As another big move, you can use the same weights as from the barbel cheat curls. The goal of this exercise is to move your elbows to behind your body, rather than up in front. 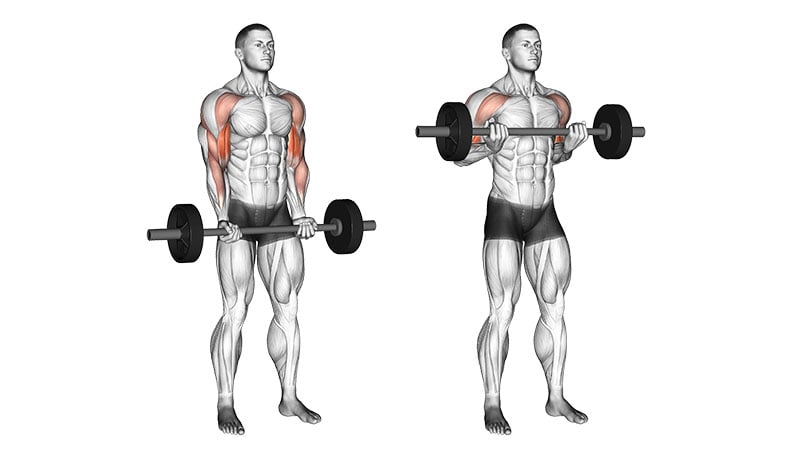 The classic weighted chin-up is another excellent option for loading up the biceps with big weights. This works the biceps through all three of their functions. The arm is moving at both the shoulder and the elbow, plus the forearm is twisted away from the body. This is another exercise to perform as a drop set, combined with the peak contraction chin curls. 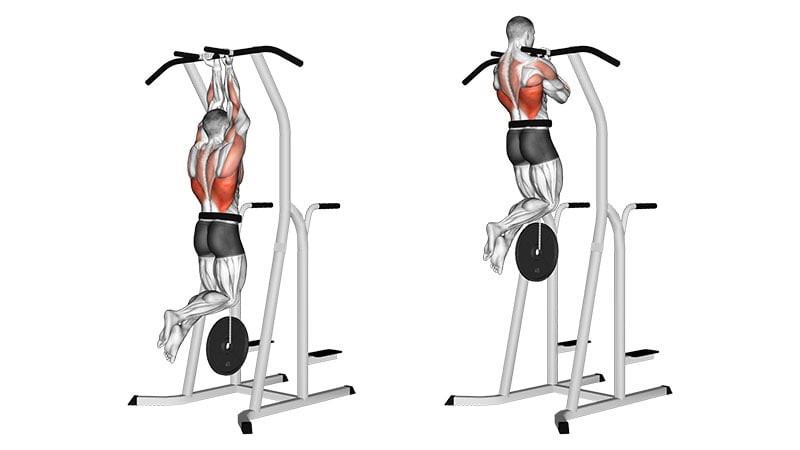 Dumbbell curls are another classic exercise to include in your biceps workout. It works two of the bicep functions well — the bending of the elbow, and twisting of the forearm. This time, however, you’re going to engage beast mode by adding resistance bands. The exercise’s strength curve sees it getting easier as you reach the top of the move. Hence, to maintain the difficulty the whole way through the move, the resistance bands add that extra challenge as you reach the top. 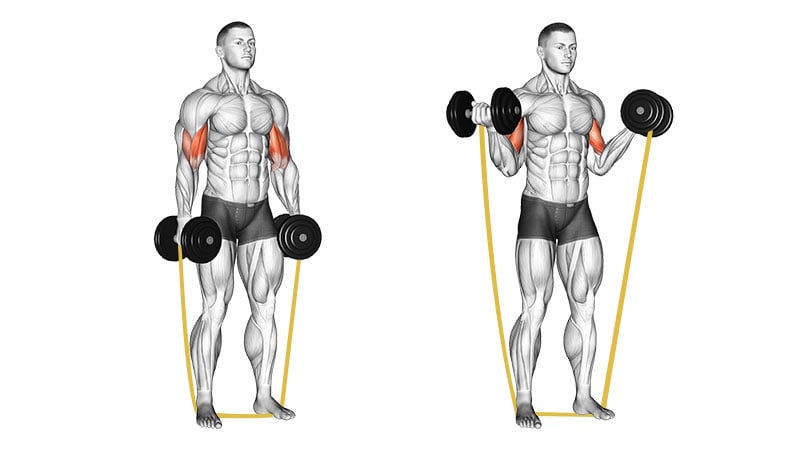 Similar to the exercise bands adding difficulty to the end of a move, you can switch that difficulty to the beginning with an incline dumbbell curl. Starting with your arms behind your body also allows for a full stretch of the bicep, therefore working it through its full range of motion. 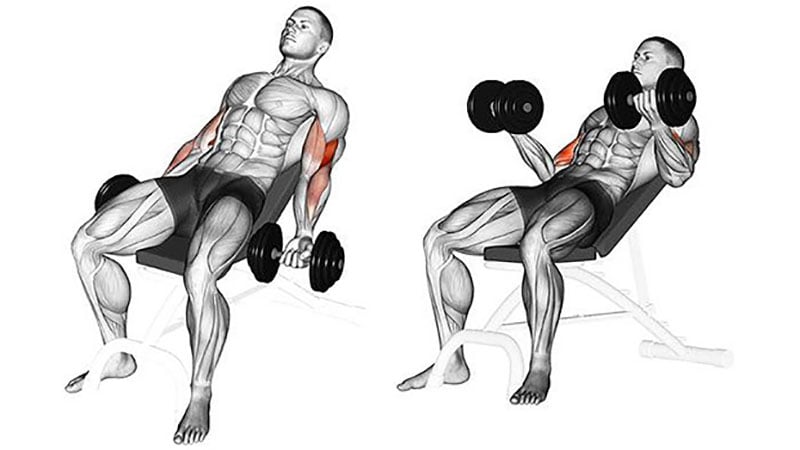 Finish your biceps workout with an epic triple threat. This bicep curl trifecta is going to take advantage of shoulder rotation in order to hit each head of the bicep, as well as the brachialis. You’ll do three different curls, one after the other, with your shoulder and hand position changing in each. Use the same weight for each position. 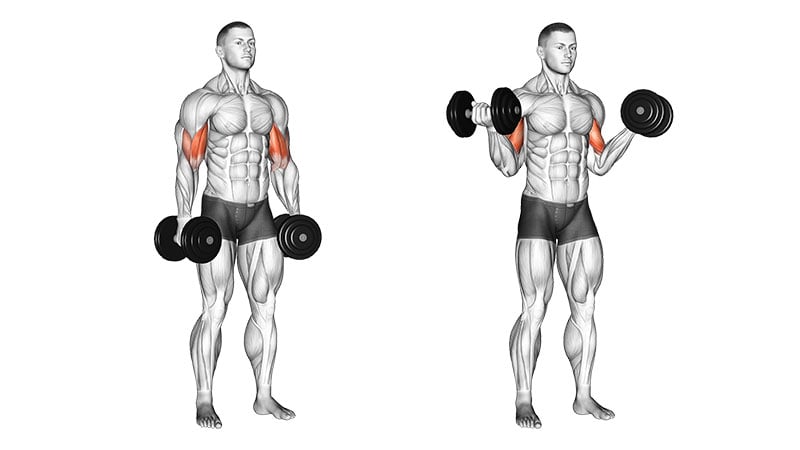 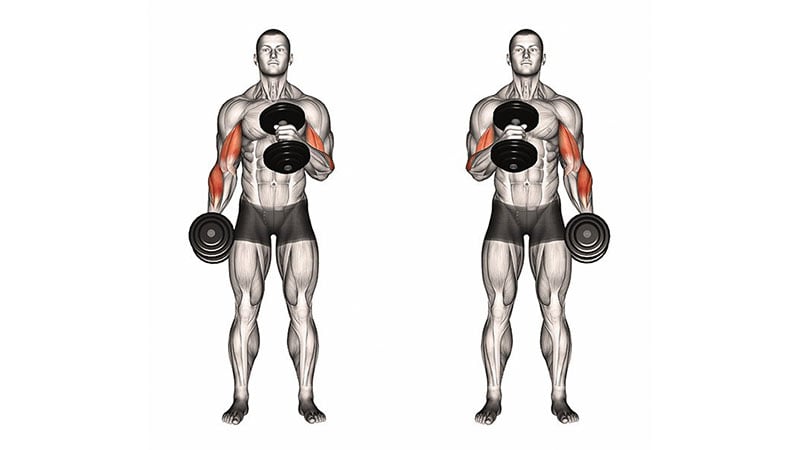 Reps: 8, in each position on each arm

What are the best exercises for biceps?

Curls are generally the best exercise for explicitly targeting your biceps; however, there’s plenty of variety in curl style to keep your workout interesting and build mass. Try barbell cheat curls, barbell drag curls, banded dumbbell curls, dumbbell incline curls, and a dumbbell curl trifecta. Once you’re bored of curls, you can also add in some weighted chin-ups.

How do I increase my bicep size?

You need to aim for muscle hypertrophy, which is in the increase and growth of muscle cells. The best way to achieve this is by lifting increasingly heavy weights as you get stronger and gain more mass. The continual challenge of your muscles forces stimulation and repair, resulting in size gains.

Why are my biceps not getting bigger?

There could be a few reasons why your biceps aren’t growing, despite training them. The first cause could be that you’re not mixing up your technique enough by using different grips and angles to change the way the muscle works. You could also be going too fast and not completing a full movement to take the muscle through its full range of motion. Lastly, you might be unintentionally overtraining and not giving the muscle a chance to repair before stimulating it again.

How often should I train biceps?

Two to three (non-consecutive) times a week is a good frequency for training your biceps. This gives you a good recovery time and lets you stimulate them more when you are in session. However, you can do more if you want, but you’ll need to decrease each session's intensity. What you choose will depend on your goals.